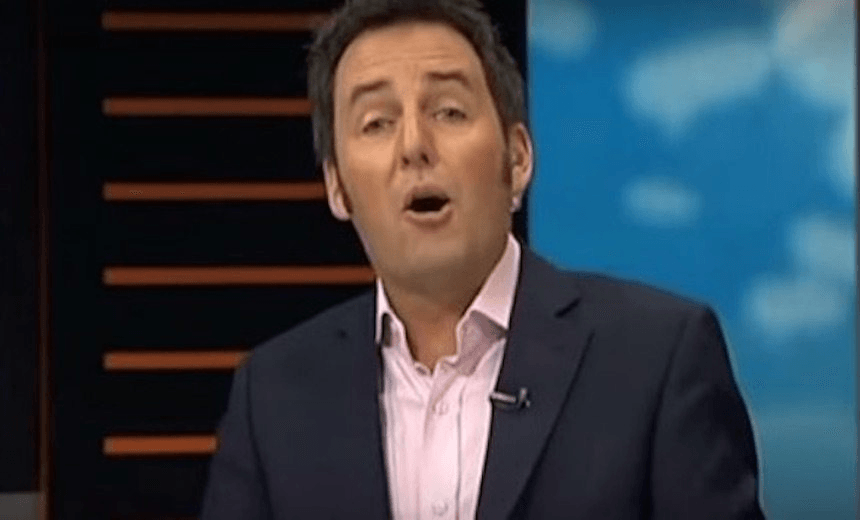 Hosking Week: A public apology from the guy whose dad invented Mike Hosking

All this week on The Spinoff we’re delving into broadcasting legend Mike Hosking’s unique position in New Zealand culture. First up, Pete Douglas delves into his complicated relationship with Hosking, and interviews his father about the family connection which helped create the multimedia monster we know today.

Growing up in suburban Wellington I was often surrounded by broadcasting types. This was due to my Dad’s job in radio, and that slightly 80’s habit parents had of letting the kids stay up at boozy parties later than they probably should have. These men (the biggest names in Wellington broadcasting were all men) were endlessly fascinating to a chubby, shy and impressionable kid such as myself. Booming voices, bad jokes, and very loud and unshakeable opinions on every aspect of life abounded. My obsession with these kind of larger-than-life personalities, and in particular their opinions on things they probably should know better than to comment on, was therefore forged early on.

Cut to 2016 and the biggest New Zealand media personality of them all – Michael Noel James Hosking IV. Mike Hosking not so much dominates the media landscape as he embodies it fully in all its forms. Via his top rated show on Newstalk ZB (the imaginatively titled Mike Hosking Breakfast), his co-hosting (at times whilst seemingly half-asleep) of the TVNZ hit Seven Sharp, his stuttering opinion pieces for the New Zealand Herald, and of course his regular Mike’s Minute videos; Hosking pervades New Zealand culture with his views and ostentatious personality.

Even the clever parodies which have emerged of the highest paid broadcaster in the country and his lavish lifestyle, somehow manage to make his presence seem all the more unavoidable.

Hosking’s slightly sneering arrogance has been critiqued many times before. He thinks Waitangi Day is a bit of a waste of time, laughs at the idea of a housing crisis as if it were pure urban legend, and manages to somehow keep a straight face as he callously poo-poos the concept of increasing our refugee quota, just before jumping into his brand new Ferrari and roaring off to his stately Remuera home. Most recently he caused outrage with his race-baiting comments about New Plymouth mayor Andrew Judd and his battles to get Maori representation on the local council. Indeed Hosking has an opinion on everything and anything, and whether you want to hear it or not he is always happy to share.

Now, this is where I need to confess;  you see – my family helped create Mike Hosking. My father was head of the National Radio network in the 1970s, when a young Hosk was poached from private radio, and earmarked for bigger and brighter things.

And so my relationship to Hosking is complex. Shades of guilt, regret and even a strange kinship somehow intermingle with the inclination to pile on when a Hosk-attack starts amongst friends.  Can you really hate something that you are the son and heir to the creation of?

This had all been weighing on my mind of late, so I decided to interview Dad on the topic. After all, he must have some regrets about the rise and rise of Hosk? Doesn’t he shudder when the front page of the Herald runs articles about something as awfully pedestrian as Hosk’s parenting style? What follows is an excerpt from our chat:

Me: So what is your first memory of Hosk?

Dad: There was a station down in Dunedin called 4XO and that was the first of the Radioworks stations. We heard him in the 70’s and thought this guy actually has some talent, which he does obviously, and we brought him for Radio New Zealand. I think he worked in Christchurch for a start and then for a period he was on my staff in Auckland doing the 9-midnight shift. He was quite high in his opinion of himself.

Me: So you were the one who hired him over to Radio New Zealand?

Dad: Well… yeah… technically I suppose so. I was the manager at the time and gave the go ahead. Eventually he ended up on National Radio, I mean he did Morning Report in the 80’s, but he didn’t last long in those jobs. From what I gather and from what he says now he didn’t enjoy working for government owned radio – he’s always ‘oh private enterprise all the way’. He’s become very right wing, as you can tell from his opinion pieces, but then again if you were being paid over a million bucks a year you might be the same.

Me: What do you think of him these days?

Dad:  I heard a few minutes of him twittering away on the radio this morning with Toni Street and I just had to turn it off. He’s always trying to cover all his bases – he’s a big supporter of the Warriors – bullshit he couldn’t give a toss about the Warriors! He tries to make out he always knows about the new records and films coming out, oh he’s up with everything. He rubs me up the wrong way with everything I’m afraid.

Me: yeah I’ve never got the Warriors thing, and as for his obnoxious opinions, he was on Seven Sharp just the last night telling me how I should be proud every time I “bite into a pink lady” because our apple industry is the real rockstar of the economy.

Once I’ve thanked and farewelled Dad, including an apology and heartfelt promise to never bring up Hosk again in our chats, a thought occurs to me. Rather than burdening the family name with the cross of responsibility for allowing Mike Hosking to happen, perhaps it’s healthier to realise that a lot of media personalities and high-rollers are just irredeemable assholes? Sure, Hosking is almost impossibly hard to take at times, but if it wasn’t him whipping up all the latent bigotry in middle New Zealand, who’s to say there wouldn’t be someone else even worse in his place doing just the same?

And so I make a promise to myself; never again will I let Hosk’s baby-boomer-pandering garbage bring me down. Instead I will enjoy the absurdity of his opinions on all things – important and not – and be eternally thankful that, while I may have an undeniable tie to Mike Hosking, at least I’m not that poor bastard people mix him up with all the time.