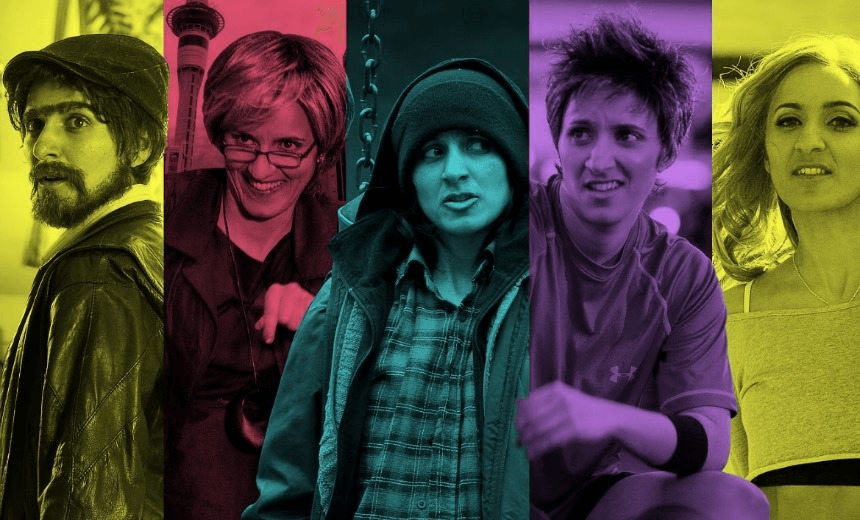 Before the new season of Funny Girls premieres with director Madeleine Sami at the helm, Pete Douglas revisits the characters from her brilliant local comedy Super City.

With the writing assistance of Tom Sainsbury and direction of Taika Waititi (season one) and Oscar Kightley (season two), Sami created a surreal universe which also felt very much grounded in actual Auckland life in the 2010s.

To celebrate Madeleine Sami directing the second season of the wonderful Funny Girls (premiering at 10pm this Friday on TV3) I’ve ranked my favourite Super City characters, from least favourite to favourite:

Don’t get me wrong, I still love Georgie. It’s just that there may not ever have been a more tragic figure in a local comedy series. She sleeps rough in Myers Park with her dog Sad Guy and regularly visits the Auckland City Mission. Five years on, her story rings even truer to the living situation of more and more of Auckland’s most vulnerable than it did at when Super City first screened.

Azeem is an Iranian-born taxi driver with a deep respect for Māori culture and language. Azeem is loyal to his gruff boss Gary who he “loves like a brother” (even though Gary is convinced Azeem is trying to steal his wife).

Azeem is a damned nice guy but a loser in love. His wife left him for his uncle back in Iran, and his luck with the ladies in his new home of New Zealand is not great, to say the very least.

The phrase “try hard” barely begins to describe 20-year-old Levi’s efforts to impress his rugby teammates. Levi is so desperate to be accepted and loved that he will do just about anything to improve his cred, even if it means denouncing Celine Dion.

A buffoonish middle-aged Englishman, Ray owns a panel beating business and is married to Tiffany, a female bodybuilder twice his size. Despite his good intentions, Ray is utterly clueless about acting acceptably in the modern world. Relatable.

Linda is a bespectacled Remuera type who tries desperately to keep up appearances with her entitled and extremely wealthy friends. Linda cruises the streets of South Auckland trying to pick up an underprivileged artist – or a “little brown nugget” as she puts it – to nurture creatively (read: show off to her society friends). She comes across Eugene at a street rap battle and takes him under her wing with predictably disastrous results.

When we first meet Jo she is telling anyone who will listen that she frosted her hair and frosted her pubes. Mate! An ultra-competitive gym instructor, Jo runs a spin class with her unrequited love/best mate, Tracy O.

When Tracy gets engaged to her boyfriend, Jo is sent into a jealous spiral that eventually leads to her accepting her own sexuality – although not before numerous cringe-inducing moments of denial.

An aspiring career musician for whom time has most certainly run out, Mary ropes her husband and son (Neil Finn’s son Elroy, for trainspotters) into helping her try to secure the record contract she so desperately wants.

Along the way she runs into slightly more successful musicians from her past, including arch-nemesis Annie Crummer and her “ex-lover” Dave Dobbyn, all the while trying to modernise her excruciatingly dated sound.

Pasha Patel is a 30-year-old (gasp!) woman desperately trying to not act her age. She picks up 16-year-old boys in bars, and describes herself as “a party girl first and foremost, slash promo girl, slash actress, slash new Jim Beam girl”.

There was talk of a movie being made about the early rise of the Pasha, and I’m still holding out hope. Oh yeah, and her fake American accent while acting with Lucy Lawless in the Xena parody The Saffron Chronicles is truly a thing of wonder.

Has any fictional character ever given civil servants as bad a name as Ofa Faka’apa’apa? A client-facing employee of “Work and Unemployment NZ”, she is mean-spirited, narcissistic, self- absorbed and so damn funny.

Ofa idolises Steven Seagal, treats her clients with utter disdain and ridicule, and tries in vain to climb the employment ladder through deceit and lies. Her battles with co-worker Helen (Urzila Carlson) are a treat. She manages to do this all with the disdainful sneer of the 13-year-old who openly mocked me in the street for being too old to play Pokémon Go.