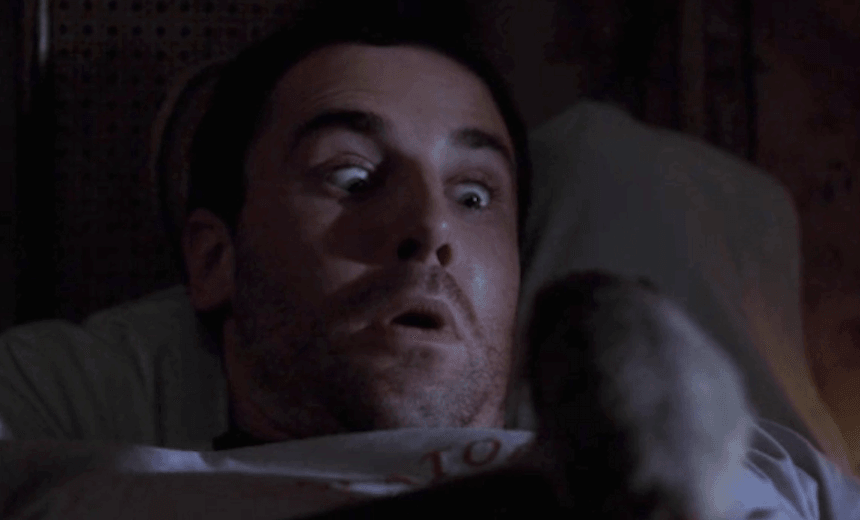 Television: Throwback Thursday – The Best of Masters of Horror From Rat People to Killer Cats

Masters of Horror brought together the most morphed minds in horror to direct a series of one-hour TV specials. Aaron Yap lists the essential episodes to scream your way through this Halloween.

The story begins like a boilerplate slasher movie scenario – with a meta twist. In 2002, Mick Garris, director of many a Stephen King adaptation, invites a bunch of his genre-lovin’ filmmaker buddies for a dinner. Among the guest list, seasoned names such as John Carpenter, Tobe Hooper, Joe Dante and Larry Cohen. Instead of heads rolling, this genial gathering of like-minded souls leads to further dinners with other horror directors. A few years later, the anthology series Masters of Horror is born, with Garris running the project for Showtime.

The format harked back to the likes of Night Gallery and Tales from the Crypt: each episode a self-contained, hour-long story, directed by one of the aforementioned “masters” who attended Garris’ dinners. The roster read like a dream-come-true treat for horror fans, but the results, as with most weekly anthology shows, were mixed. Occasionally, the series suffered to due budgetary constraints and having some of the rustier “masters” at the helm.

So, to carve the most out of your Halloween viewing experience, here are the essential Masters episodes to check out for the maximum amount of skilled scare-mongering:

The series got off to a ferocious start with this adaptation of Joe R. Lansdale’s short story by Don Coscarelli, director of ‘80s cult fave Phantasm. It’s a nasty bit of business, adding a few new fiendish twists to familiar rape/revenge and crazy-hillbilly tropes. The narrative, split between flashbacks and present time, follows final girl Bree Turner. Her relationship to an abusive survivalist nutcase (Ethan Embry) arms her with the tricks to stay alive, something she needs after being captured by a towering backwoods bogeyman (John DeSantis). Coscarelli’s tautly wound direction and Turner’s badass performance keep this grisly nerve-rattler humming along until its twist ending. Phantasm star Angus Scrimm pops up as a babbling old eccentric.

Given that all of H.P. Lovecraft’s works are in the public domain, it’s a wonder why more of them haven’t received any screen treatment. We can at least be thankful for Stuart Gordon, a B-movie auteur who probably has more Lovecraft adaptations under this belt than any other director: Re-Animator, From Beyond, Castle Freak, Dagon and now this trippy update of the author’s 1932 short story. Gordon works wonders with practical effects on a limited budget, and even when it comes off a tad goofy (e.g. the human-faced rat), “Dreams in the Witch-House” really hits that Lovecraftian cosmic-horror sweet spot with its mind-bending mix of baby-sacrificing witchcraft and interdimensional travel.

John Carpenter’s “Cigarette Burns” is undoubtedly the most widely praised entry in the series, and it’s easy to see why. After a particularly weak run in his career (Escape from L.A., Vampires, Ghost of Mars), this represented a return-to-form for the horror master – his best since In the Mouth of Madness, which it shares some thematic similarities with. The self-reflexive, geeky cinephilia of Drew McWeeny and Scott Swan’s script didn’t hurt too, being about a movie theatre owner (Norman Reedus) on a quest to track down an exceptionally rare film called Le Fin Absolue Du Monde (The Absolute End of the World). The catch? It drives anyone who sees it crazy. Reedus’ wooden performance is a bit of a drawback, but “Cigarette Burns” is otherwise one hella creepy, surreal, deftly atmospheric hour. A must for fans of the director.

“Sounds Like” is more psychological Twilight Zone-style fare than blood-and-guts horror, but it cooks up an enormously queasy sweat – especially if you’ve ever worried about compromising your aural faculties in the worst way imaginable. It provides a powerful actor’s showcase for Chris Bauer (Frank Sobotka from The Wire), who’s terrific as a call centre floor manager plagued by a grief-induced condition that causes him to hear everything at ear-splittingly amplified levels. The dizzying sound design is incredible – make sure to crank this up to 11!

Like Carpenter, Italian maestro Dario Argento was far from his masterful youthful self during this period, but managed to deliver this insanely gory shocker that saw him operating at his lurid best. Far more entertaining than his Season 1 offering “Jenifer”, “Pelts” juggles Meat Loaf (yes, that Meat Loaf), lesbian strippers, vengeful raccoons and moonshine into a truly bonkers experience. Effects wizards Greg Nicotero and Howard Berger do some of their nuttiest, most over-the-top work of the series here; the show-stopping bear-trap and self-mutilation sequences are worth the price of admission and will have your jaw hanging in disbelief. Hilarious trash that you won’t forget anytime soon.

Edgar Allan Poe’s short story The Black Cat has been adapted for screen several times before – including a killer Dario Argento version in 1990’s Two Evil Eyes – so it’s fairly well-trodden ground. However, Stuart Gordon has taken a respectable stab at it, blending fiction and facts from Poe’s life, and the result is actually one of the Masters of Horror’s most consistent, visually lush hours. Jeffrey Comb is delightfully unhinged as Poe, who, in the throes of alcoholism and writer’s block, believes his cat Pluto is out to kill his ailing wife Virginia (Elyse Levesque). A spine-tingling, morbidly fun one to watch with your furry friend.

Got chills? Click below to spend some time with the Masters of Horror on Lightbox