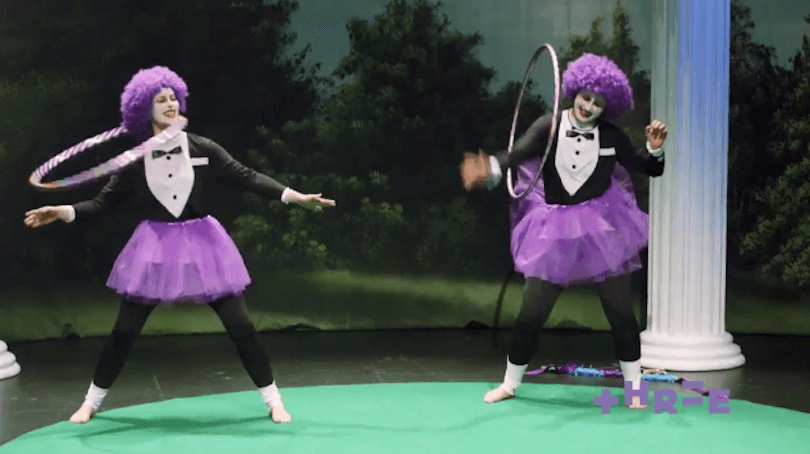 What fresh Willy Wonka hell is this.

What fresh Willy Wonka hell is this.

Welcome to Week 8 of The Block NZ, in which Jason Gunn and Tom Sainsbury blesses us with their presence, Mark literally blows his own trumpet, and Chlo and Em choose their paint based on the colour of their mother’s nipples.

Life on The Block took its toll on our beloved teams this week. They hit the nipple-coloured wall, their putrid bodily fluids spraying in every direction. “I need to go to the bathroom for a hundred different reasons,” Ben said, while Agni did the loudest spew Claire had ever heard.  Did his vomiting block out the sounds of Chlo and Em’s tears, after Agni forgot to bring the important ‘Undo’ game changer to last week’s room reveal? Hard to know.

In other news, Chlo is me every time somebody asks me to leave the house.

It was batshit boring Garage and Storage Week, so The Block NZ treated us to the ‘Block Stars’ theatrical challenge, where teams were encouraged to throw away whatever shreds of dignity they had left in the name of $10,000.  They deserved a +1 for bravery as Tom and Ben dressed up as newsreaders, Claire and Agni delivered a comedy sketch, and Stu and Amy made tiny Albert Einstein recite a poem.

Just as I wondered if four and a half hours of garage carpet banter would have been the better option, the circus rolled into town.

Just what did we do in our previous lives to deserve Chlo and Em? This week they took us on a journey of a thousand costumes, destination Happytown. I laughed, I cried, I felt my cold, cynical heart begin to thaw as Chlo and Em joyously face-planted and hoola-hooped their way around the stage. Forget winning The Block NZ, we just found the winners of the game of life.

The real drama, however, was taking place on the building site. Having won the right to eliminate a team from room reveal, Chlo and Em had to decide which of their friends to sell down the river of dreams. Money or morals? Sunbeams or strategy? It was Survivor NZ: Hobsonville Point, and if the pressure doesn’t make Chlo and Em vote themselves off the island, then colour me a nipple-themed shade of surprised.

While Mark reminisces about a golden age when “every garage had a calendar”, let’s cartwheel our way into this week’s power rankings.

All hail the Chumbawamba of Hobsonville Point, because when Chlo and Em get knocked down, they get up again. One minute they’re crying over their room loss, the next they’re pulling each other’s fingers and throwing down some fart-powered roly-polys. Pretty sure Chlo and Em fart glitter anyway, so bombs away.

Let’s hope Chlo doesn’t pull Claire’s finger as well, because Claire threatened to both “spew and shit at the same time” if Amy copied their secret plan to convert their garage into a fourth bedroom. Claire and Agni might call it a bedroom, others might call it a windowless dungeon, but either way it’s one more room for Claire and Agni to sleep in and if that’s not #winning then I don’t know what is.

The judges slated their master bedroom as “too masculine”, but what good Kiwi bloke doesn’t want to spend a gazillion dollars on some half-painted ceilings and a thousand skylights? Ben and Tom channelled their best Mike McRoberts magic this week, but like the age-old newsreader prophecy goes: he who sews a cushion with a stapler, always regrets removing the walk-in wardrobe.

So many tactics, so little time. Our favourite puppet masters pulled every string this week, framing Ben for spilling the beans about Claire and Agni’s secret room, scoring strategically so Ben and Tom won extra cash, and proposing that if Chlo and Em eliminate Claire and Agni from this week’s room reveal, then Stu and Amy will give Chlo and Em their winnings.  I’m amazed, tiny Albert Einstein is in shock. Just what else do Amy and Stu have hiding in their My Little Pony bag of tricks?