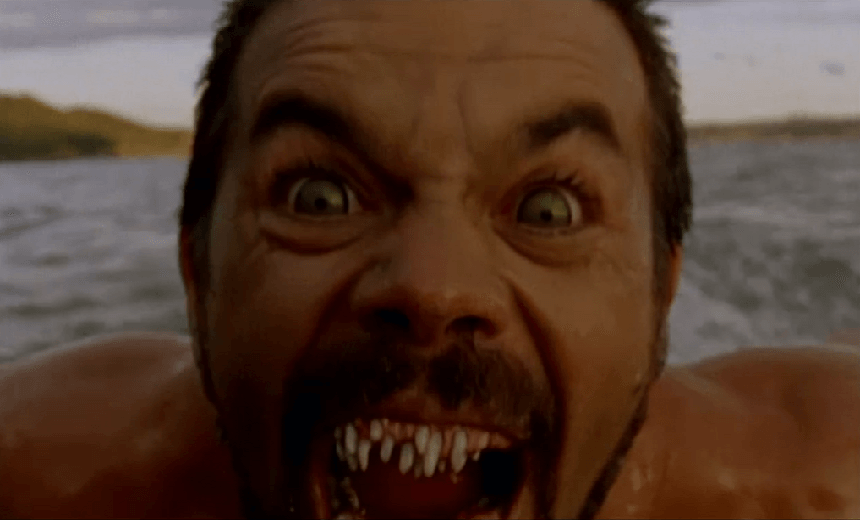 “Kia ora, I’m Temuera Morisson, and welcome to Mataku; chilling tales of the unexplained and the unexpected. Join me on a journey, through the supernatural world…of the Māori.”

Mataku is basically the Maori X Files, and it’s a national embarrassment that this show isn’t every part as much cultural canon as The Lord of the Rings or Outrageous Fortune.

‘Chilling tales of the unexplained and the unexpected’, Mataku is an early 2000’s show that explores the consequences of messing with tapu and tikanga maori. The border between the spirit world and our own is gossamer.

The mythology of Māoridom imbues the natural world with an innate mauri – a life essence or quality of being. Deities, demigods and the spectres of the long dead walk the earth in the form of mountains, trees and rivers.

Mataku is about what happens when you get on the wrong side of the spirit world.

The show opens with Tem Morrison in a dark suit with plumb shirt and purple tie. Strong downlighting casts deep shadows, obscuring his lower half.

“Children’s work is breaking calabashes,” he says. “In other words, it’s expected for children to make mistakes. After all…aren’t we supposed to learn from our mistakes?”

Every episode he has a different monologue, in English and Te Reo. They’re creepy as hell.

Mataku as a whole is refreshingly frightening. I grew up in Raglan, and the idea of vengeful makutu and sacred taonga has a certain sway out there. Across the harbor from my house was a giant sand dune. I dreamed of kayaking across and sliding down it, but neither me nor my friends were ever allowed. Apparently it was ‘tapu’. I realise now that it was probably just dangerous, but that sort of explanation at a young age can do things to you.

That’s why on Mataku, when shit starts getting Jaws on a group of mates out fishing on a sacred lake, I know it’s not a shark down there. Someone’s going to get taniwha’d, real bad. When a real estate agent begins development on a burial ground, we know things are going to get spooky.

The show never overreaches its limited capacity for special effects, either. The plotlines and mythology are enough so that it’s unnecessary to kitsch up the show with terrible props. Pacing and suspense are also used effectively, and there are some moments of real dread.

Jump-scares and costuming aside, the soundtrack is superb. Somber karakia, the humming purereha and wavering koauau create a surreal, otherworldly soundscape. Where Eastern spirituality seems to be embodied in the strains of a sitar, Māoridom is inextricably linked with these haunting instruments. Traditional Māori music is the stuff of ancestor spirits and animist magic.

There are thirteen, 25 minute episodes on Lightbox. Each episode has a fresh cast and yet Mataku manages to find over and again the sweet spot between depicting real people and hamming up a cheap, cuzzy-bro stereotype.

The characters are formulaic and relatively shallow, but they’re rarely jarring, and they get the job done without falling into cringe territory. They’re archetypical of your average kiwi. We all recognise the fat, drunk white bloke in the tank top, scoffing at Māori customes and generally being a lout. “Enough yap, eh? There’s fish to catch! You can worry about your mowrey ghosts.”

The roles occasionally border on silly, but there’s a certain element of self awareness. ‘Gooby’, a white guy in a bucket hat, goes missing from around the campfire. The lads find him smoking a joint off on his own to avoid sharing. He’s later seen rolling a Port Royal, filter stuck to his lip. Classic Gooby antics.

But where Mataku stands out most, where it’s seriously ahead of it’s time, is in its portrayal of the Māori people. The cast is predominantly Māori, and Te Reo Māori makes up a significant portion of the dialogue. In the same way that huge productions like Narcos are doing today, Mataku incorporates the native language frequently, and leaves the audience at the mercy of subtitles. It’s a bold, assertive decision, but one that is absolutely essential to the quality of the show.

Māori aren’t token spirituals, they’re the main event. Māori actors, Māori traditions and Māori stories. Mataku tends towards the tone of Whale Rider, where legend is not so far from reality and the old ways still hold sway.

It’s a stunning representation of Māori on screen and a celebration and honoring of the beliefs and mythology unique to New Zealand, all packaged as a cracking good sci-fi show with plenty of Kiwiana-feels.