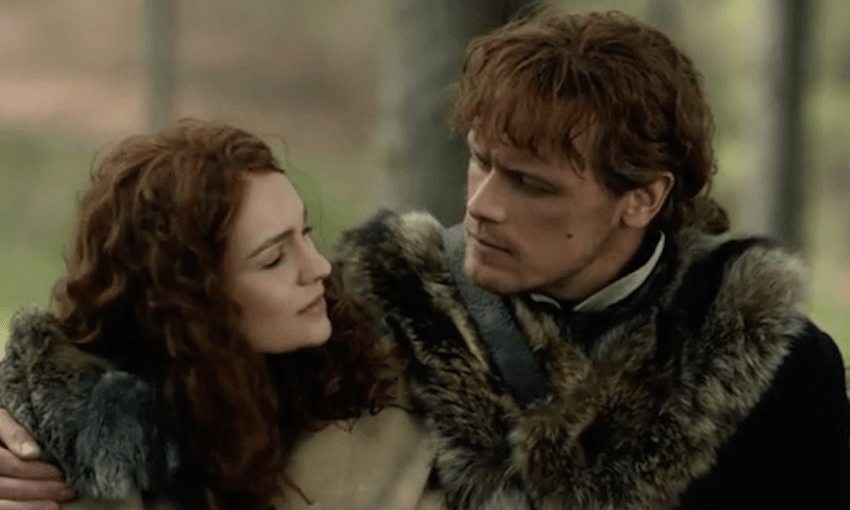 The resemblance, she be uncanny.

The resemblance, she be uncanny.

Imagine you’re Jamie Fraser, taking a humble pee in an alleyway, watching the steam rise off the bricks one cold morning in 1769 and thinking of nothing more than how bonkers your donkey is or whether you should grow your fringe out. A stranger approaches. Her hair is nearly as incredible as your own, but at first glance she’s just another woman desperate to climb aboard the MacKenzie Express and ride it all the way to paradise.

Think again, James Fraser. The woman you just mistook for a prostitute is actually your daughter from the 20th Century, and that sound you now hear is a gazillion Outlander fans squealing into their Jamie Fraser shower curtains at the glorious sight of Brianna meeting her father for the first time.

Jamie Fraser is the gift that keeps on giving, and this moment was a true Christmas miracle. Jamie is the whipped cream to my cracked pavlova, but we’ve tasted barely a sliver of his delicious goodness this festive season. Outlander has distracted us with raging ex-wives, ghostly fathers, and Roger’s wispy culottes, and without my regular dose of Vitamin J, I am sicker than the brat who ate the dodgy garlic in season one.

I am J-Fray nutrient deficient. I have rickets of the heart. I am Fanning’s exploding hernia, bulging my way to the surface and screaming to be saved, so thank the sweet lord of ginger kisses that this week’s Outlander gave us such a life-saving, soul-restoring dose of the King of Men.

Exhibit A: Jamie’s face when he realises he’s meeting his daughter, aka ALL THE FEELS:

Or this bespectacled Jamie slagging off the shithouse job the printer did on his obituary:

But I’m getting ahead of myself, just like Lizzie when she mistook Roger for the man who assaulted Brianna. We began in Wilmington, where a traumatised Brianna discovered Roger had sailed on the early tide, and Lizzie’s Hot Scot Radar had been pinging all morning. Word on the street was that a “tall, red-headed Scot” was in town, and how many ginger Scotsmen with kick-arse surgeon wives could there be in colonial America c.1769? Three or four, tops, I reckon.

This was it. This was the moment we’ve waited four seasons for. Brianna was about to meet her father, find her mother, inform them of their imminent deaths, and hightail it back to the future to eat peanut butter and jelly sandwiches until the end of time.

Until then, she’s just a girl, standing in front of a man taking a slash, asking him to love her.

The Frasers were a family for the first time in 200 years. Claire and Jamie had never been so happy, even though they’d just found out they were about to die. They all returned to the Ridge, where they basked in the glow of familial joy and drank a shitload of Jamie’s moonshine. Murtagh told a classic yarn about Jamie pashing his cousin, Brianna told Claire that Frank knew she went back in time, and Claire told Jamie that Brianna was pregnant.

I’m sorry, what? True story, Brianna was up the duff, but she didn’t know if the father was Roger “All or Nothing” Mackenzie or Stephen “Utter Shitbag” Bonnet.  Let’s just hope that baby comes out of the birth canal wearing a fine pair of culottes, mystery solved.

Jamie loved having his daughter in 1769, and he and Brianna bonded by going bee-hunting. It sounds ridiculous, but honestly if Jamie Fraser invited me to hunt a box of tissues with him, I’d cock my rifle ASAP. It was a beautiful moment when Jamie told Bree that she was his “flesh and blood, and my heart and soul as well,” and then they stole the beehive and pillaged all the honey. Welcome to America, please enjoy the nectar of the colonial gods.

But these sweet times disappeared quicker than you could say “Dunbonnet is different to Stephen Bonnet”, when Lizzie spied Roger arriving on Fraser’s Ridge. She told Jamie he was the man who assaulted Brianna, and suddenly it was all on like 18th Century Donkey Kong. Jamie unleashed hell, and poor Roger barely had time to straighten his socks before the Fraser fists met his face. It’s fine. I’m sure he’ll be fine.

It’s a new year, it’s a new you, and I’m as full as a hive of Fraser’s Ridge honey. This was a cracker of an episode that healed us with all its Outlander goodness, and who knows what adventures will rain down on us now the Frasers are all in the same century? Like a red-headed Scotsman pissing in an alleyway, I’ll be here for every drop.