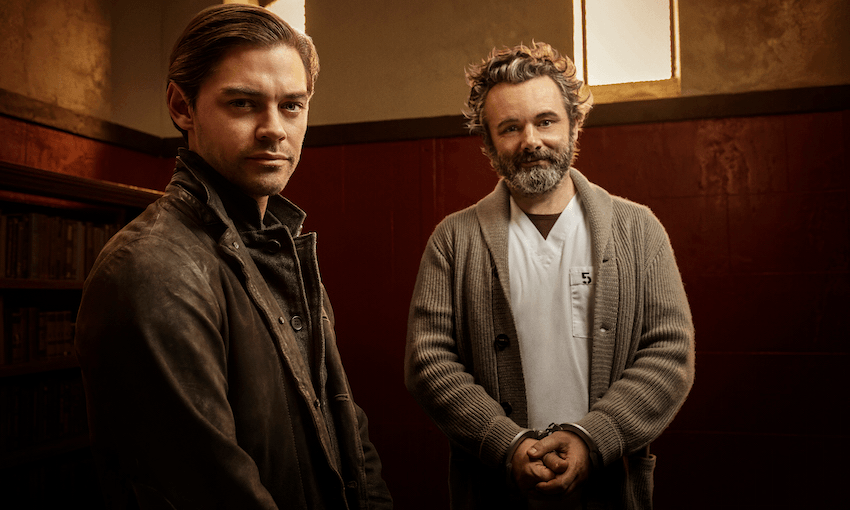 Prodigal Son is a new crime procedural coming hot and fresh to TVNZ 1 on Mondays at 8.30pm. Jean Sergent has a few reasons why you should be watching it.

1. It has a goose-bumpy premise

Child discovers dad is serial killer, child rats dad out to the cops, dad goes to prison, child grows up to be a genius cop (The Walking Dead’s Tom Payne) who needs his serial killer dad (professional Tony Blair impersonator Michael Sheen) to help him unravel the minds of psychopaths. Sign me up!

2. It’s brutal – and not just because of the body count

The lead character, Malcolm Bright, has such terrible PTSD nightmares that he chains himself to his bed every night. It’s a very effective character device, and is also morbidly funny. Each new case and new killer brings a new set of weird methods of violence. From a syringe held too close to an arm, to a snake climbing up a leg, Prodigal Son delivers a solid stream of brutal near-misses.

3. It has all the cold comfort of a nice warm procedural drama

A good procedural drama is the ultimate in comfort viewing, letting you sink into a monster-of-the-week story while building a relationship to the core characters and the overarching plot. Think The X-Files or Elementary: we the viewers are invested in the bigger picture, but it’s the twists, turns, and fresh cases that keep us hooked. Prodigal Son combines a lot of the character and plot dynamics that make other procedurals, like House, such a moreish delight.

4. It has the great Welsh actor Michael Sheen in it!

If you are looking for an actor who can pull off a rakishly-handsome-murderer vibe, Michael Sheen (Masters of Sex, Good Omens, Twilight) is your man. Sheen plays the serial killer dad who has inspired his son’s venture into criminal profiling. He brings a grinning delight to his role, mixing sinister and debonair like the pro he is. He’s absolutely loving it mate.

I love a silly crime show. Murders and blood and laughs? Thank you I’ll have another cup, you’re too kind. Midsommer Murders or Miss Marple fit the bill, but outside of the occasional episode of Criminal Minds, US crime shows don’t often bring a relish for the absurd. Prodigal Son balances on a knife edge of taking itself too seriously that a camp energy radiates off it in waves. Bellamy Young, as the society mother of the protagonist, particularly relishes gambolling in the fields of melodramatic fun.

If you’ve been missing either of those classic shows, get involved with Prodigal Son! It’s got the father/son dynamic of Dexter, with the dark and gloomy aesthetic of Hannibal. A real two-for-one for fans of the evil genius genre.

Gilmore Girls fans know who I’m talking about. Keiko Agena is a Japanese-American actress who has somehow discovered the fountain of youth and is hogging all its delicious waters for herself. Agena provides comic relief in Prodigal Son as the geeky-sexy-funny-nervous science lady with a crush on the main guy, a familiar trope in procedurals. Her arrival in an episode is a guaranteed joy.

One of the sillier and campier things about Prodigal Son – and consequently, one of my favourite things about it – is the lavishly appointed prison cell of Michael Sheen’s character. Expecting the audience to believe that a notorious serial killer is allowed to practise medicine from prison might be a bit of a stretch, but I am all about the mahogany sidings of his cell/office. Very Queer Eye for the Incarcerated Guy. Hannibal Lecter would have killed (and eaten) for that treatment.

A show with such a tense central relationship as the one between Malcolm and his killer dad need light-hearted energy elsewhere. Although Sheen does bring it big with the laughs, it’s the supporting characters who fling around the most bon-mots. Sassy-lady-cop Dani played by Aurora Perrineau provides a gorgeous deadpan foil to Malcolm, whereas Bellamy Young brings the full-noise one-liners about quaaludes and society dinner parties.

In contrast to the bright saturation of the New York streets and cop shop, many of the sets in Prodigal Son are properly creepy. That dark Hannibal-esque aesthetic is put to excellent use when it comes to the chill-factor. Backlit lofts and dark mahogany offices make for a spine-tingling visual feast. As the series progresses, and the family relationships become more complex and dangerous, I predict the creep-factor will rise and rise.

Oh, and by the way: Lou Diamond Phillips is in it. I might rewatch La Bamba while I wait for next week’s episode.

You can watch The Prodigal Son on TVNZ1 at 8:30pm on Mondays.