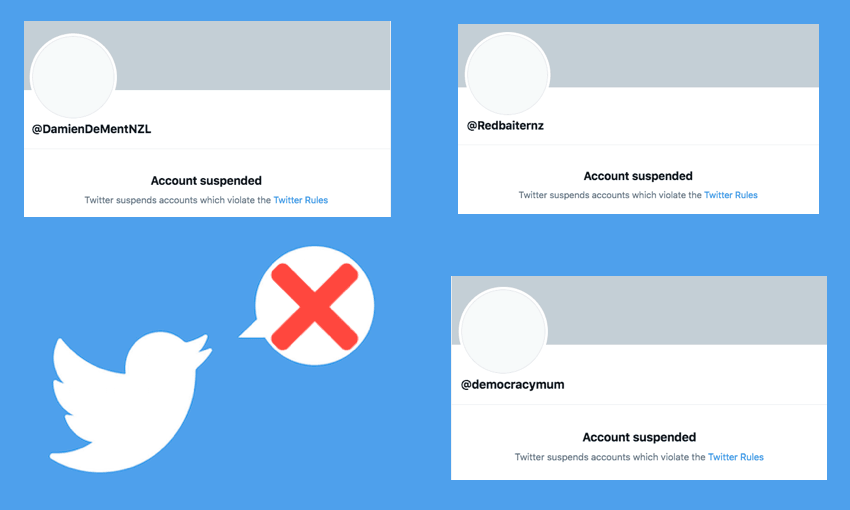 NZ right-wingers caught up in global purge of Twitter accounts

Several prominent Twitter users on the fringe of right-wing politics in New Zealand have had their accounts suspended amid a wider clampdown by the social media giant.

Twitter has suspended the accounts of several prominent members of the right-wing fringe of New Zealand politics, amid a broader crackdown following last week’s US Capitol riot.

The list included some household names for the extremely online, including the pseudonym-using DemocracyMum and Redbaiter – two personalities who have been posting on a range of forums for more than a decade.

Among users who posted under their real names, the list included conspiracy theorist Vinny Eastwood, who was paid to promote the Advance NZ party during the election campaign, former Act party board member and candidate Stephen Berry, and prominent NZ-based Trump supporter Damien De Ment.

The purge of accounts has been taking place worldwide, and those in New Zealand might have been caught up as fellow travellers of more prominent figures in the United States. Some in that space who have not had accounts suspended are now complaining they have lost hundreds of followers as a result.

As of yesterday, Twitter said more than 70,000 accounts worldwide had been suspended, in connection to sharing content associated with the QAnon conspiracy theory. The purge has also included a permanent Twitter ban for outgoing US President Donald Trump, on the grounds of sharing election and Covid-19 misinformation, and inciting violence – violations of the platform’s terms of service.

The riot at the US Capitol – which some commentators are describing as closer to an insurrection or attempted coup – left five people dead, including a police officer who died of wounds after being beaten up by protesters, and a protester who was shot and killed by police. There is evidence to suggest some protesters planned to round up and murder Democratic Party legislators. Several bombs were also found around Washington DC on the day.

De Ment was an enthusiastic supporter of events happening in Washington DC, describing the protesters as “patriots” and celebrating their actions. He did not respond to a request for comment.

Left-wing activist Byron C Clark, who has long engaged head on with some of the accounts that have been suspended, said he’s pleased to see social media companies “taking some responsibility”.

“Free speech doesn’t mean the right to have your speech published by a private platform,” he said.

Clark said there are clear links between online demonisation and radicalisation, and real-world violence later being carried out. “It’s no coincidence that we’ve seen a 250% increase in far-right terror attacks over the past five years while at the same time xenophobia and conspiracism has spread through social media.”

“I’m disappointed it took an insurrection in the US to make them act,” he said. “This could have been done after Heather Heyer’s death at the Unite The Right rally in Charlottesville in 2017, or after 51 Muslims were murdered in my home town in 2019.”

The wider international crackdown hasn’t necessarily been limited to QAnon and pro-Trump figures. Among other suspensions, several accounts connected to the Red Scare podcast – which occupies an extreme fringe of the heavily online world of the “Dirtbag Left” – have also been taken down in recent days.

The suspensions have sparked debate about the responsibilities of private platforms like Twitter around free political speech. While some see it as a worrying overreach by a private company into the political arena, others argue that Twitter is under no obligation to provide anyone with a platform, particularly if they are concerned about the consequences of what gets said.

Thomas Beagle, chairperson for the NZ Council for Civil Liberties, said it was a complicated issue for platforms like Twitter, both legally and politically.

“While it’s tempting to say Twitter and Facebook are private businesses and can do whatever they like, we need to recognise that their near monopoly status as the places where political issues are discussed also gives them some responsibilities to freedom of expression,” said Beagle.

However, Beagle said that didn’t mean Twitter had no right to ban users. “Rather I’d like to see them do a better job of being transparent about what they’re doing, and using good processes that allow people to appeal. Too often the actions of the dominant providers seem capricious and arbitrary with no ability to admit that they make mistakes.”

Two Point Campus lets you be the vice-chancellor

The prime minister has confirmed he is on his last warning.
By Anna Rawhiti-Connell
Bulletin editor
17th August, 2022

Five contenders for the super city office have lambasted media and debate organisers, saying celebrity has been put ahead of policy.
By Toby Manhire
Editor-at-large
16th August, 2022

‘Susan, you big bitch’: An excerpt from Poor People With Money by Dominic Hoey

The new novel from the author of Iceland and many excellent poems.
By Dominic Hoey
Guest writer
16th August, 2022

Polystyrene is terrible for the environment. Mushrooms could provide the solution

The mysterious power of fungi is expanding into eco-packaging.
By Reweti Kohere
Staff writer
16th August, 2022

Trevor Noah agrees that New Zealand is an uncool name

‘Be vulnerable’: How the All Blacks can turn on-field losses into off-field wins

A branding and marketing expert says the under-fire rugby team should embrace their recent losses.
By Chris Schulz
Senior writer
Aotearoa continues to adapt to a new reality and The Spinoff is right there, sorting fact from fiction to bring you the latest updates and biggest stories. Help us continue this coverage, and so much more, by supporting The Spinoff Members.Madeleine Chapman, EditorJoin Members

Politics
Made possible by

Private schooling and the expectation of success

When everything is working in your favour, it's near impossible to fail.
By Madeleine Chapman
Editor
Opinion
10th August, 2022

The Sam Uffindell saga and cream rising to the top

If National had really sorted its selection problems, the MP for Tauranga today would be Tania Tapsell.
By Toby Manhire
Editor-at-large
10th August, 2022

Following further allegations of bullying the National MP has been suspended from caucus pending an investigation.
By Anna Rawhiti-Connell
Bulletin editor
10th August, 2022

Uncontested: Not enough people are standing in local elections

Across 572 elections three years ago, 235 candidates were elected unopposed. This year could be even worse.
By Toby Manhire
Editor-at-large
Opinion
9th August, 2022

The driest of reports from the unlikeliest of places has exposed the major flaw in the government's plan.
By Bernard Hickey
Contributing podcaster