If you’ve been dreaming of that cute little cavoodle, prepare to end up locked in a bidding war with hundreds of equally desperate buyers.

Nothing gets New Zealanders hot under the collar than a story about the rampant housing market. With travel – our traditional outlet of escapism – barred to most of us, we’ve been turning toward other big buys to fill the void, only to find that our dream estates are being snapped up by property investors and the prices forced beyond our reach.

Well, it’s at the risk of inciting mass civil unrest that I report it’s not just houses that are proving elusive and expensive to New Zealanders looking to slip into the deep slumber of suburban domestication. These days, jumping on the dog ladder can be just as difficult.

In the past six months, the interest and demand for certain dog breeds has erupted, with buyers competing with hundreds of others for a single puppy and, in some cases, being placed on two-year wait lists.

“We were on a two-year waitlist for a Bernese mountain dog, but then this one popped up on Trade Me,” he said. “I emailed the guy straight away and we had to go through a very intense vetting process about our house, and how we were going to look after the dog and all that kind of stuff.”

“The seller said there were between 300-400 people on the waitlist and he had to narrow it down to eight.” 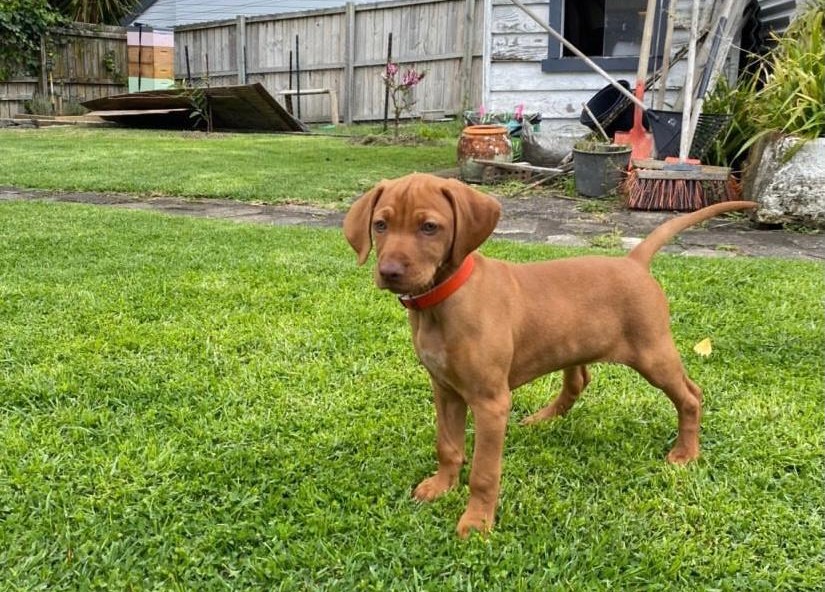 Before buying Michy, Nicholson joined a vizsla Facebook group for buyers, breeders and general enthusiasts. He says it was clear the competition was fierce whenever a breeder advertised puppies for sale, and dozens of people would immediately comment on the post to reserve one.

“You definitely have to get in pretty quick, otherwise they’re gone.”

For breeders, the past six months have been no less frenzied. Labradoodle breeder Lucy* told The Spinoff demand had increased three-fold on last year, forcing many breeders to suspend communications with the public in order to focus on their puppies.

“In the last few months, we’ve had an unprecedented number of people making contact. It was nuts. And it was very, very difficult to keep up with,” she said. “We had to make a choice, so we went on our website and said ‘we can’t take on any new people’ and I think a lot of the good breeders were doing the same thing.

While Lucy has completely sold out of all her puppies, she said the increased demand isn’t actually a good thing for dog breeders or the dogs. A lot of people are purchasing dogs impulsively, she said, with little thought given to how the dog will be cared for. Typically, many of these dogs will be on-sold when the new owners realise the commitment involved.

For most breeders, however, the most concerning impact of the Covid-19 puppy craze is the influence on breeding quality. With more competition for fewer dogs and longer waitlists, desperate buyers have been driven to portals like Trade Me where breeding quality or ethics is harder to guarantee. The demand drives up prices, which creates lucrative opportunities for less legitimate breeders who might falsely advertise puppies as better quality breeds than they actually are, or breed their puppies with dubious methods.

“Some of those [puppies] aren’t well-bred, to be honest. People are buying off the photo; they’re not necessarily looking at the quality of the breed. That’s very disconcerting.”

According to Trade Me, puppy-related searches during the last week of November had increased 22% compared with the same period last year. 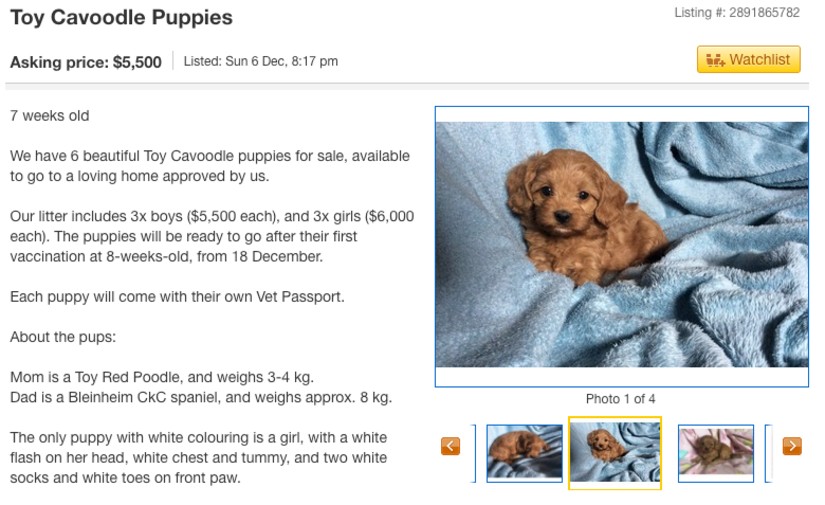 Cavoodle auction on Trade Me (Screenshot: Trade Me)

Another breeder The Spinoff spoke to was also concerned about the spike in demand, which they said was prompting some problematic selling.

“We’ve noticed a surge in ‘cavoodles’ that are been advertised as first-generation when they clearly aren’t,” said Thomas from Golden Cavoodles. “Also, there are litters with no DNA breeding behind them, just a vet check on parents to say they are healthy. But that can be like buying a great looking car that has a low safety rating.”

“There are some very good cross-breeders who do all the right things but they/we are still looked at by some as puppy-farming. There’s no line drawn between those breeding dogs reasonably and those that don’t.”

While Josh Nicholson said he thoroughly vetted the seller and made sure the breed and quality of Michy was as advertised, he admitted there was a lot of uncertainty when searching for dogs through Trade Me.

“I was a little bit sceptical because the photos just look too good; like he’d taken them from a calendar for vizslas,” said Nicholson.

Although he bought Michy for more than the average price of $1,200, fortunately the seller turned out to be genuine and the dog was an excellent pedigree.

“We knew it was more expensive, but we were willing to pay a bit more to get it sorted. It was a bit of blind faith, to be honest, but we’re pretty happy that it worked out.”

So why is it so important to be discerning when buying dogs anyway? Mostly it’s to guarantee the good welfare and health of the puppies and their mother, who shouldn’t breed more than a certain number of times.

Because dog breeding in New Zealand is largely unregulated, the New Zealand Veterinarian Association lists a range of measures prospective dog owners should consider to ensure they buy ethically, including visiting the breeder and meeting the parents before buying and buying from a certified breeder.

Of course, for those buyers not hell-bent on a designer dog or pure-blooded pedigree, the most ethical option would be to adopt one of the many ownerless rescue dogs that would otherwise be destroyed.

It may not be the most fashionable animal, but at least you’ll save a dog – and skip the wait list.

*The breeder did not want to give her real name due to the controversy surrounding the dog breeding industry.