Since her performance in the first leaders debate of election 2020, Judith Collins has been an energised figure, visibly relishing the final campaign stretch. But there was little sight of that today in the inner-Auckland suburb of Ponsonby. Despite telling media she was still having fun, it looked anything but.

Yesterday brought headlines of leaked internal chaos from within National’s caucus and a disappointing performance in the Press leaders debate. She returned to Auckland for a late-morning stroll down Ponsonby Road in Auckland Central, a routine walkabout described by her team as an opportunity for Collins to speak to locals.

Making her way down the affluent suburb’s main stretch from the Seed Heritage store toward the Ponsonby Central eatery, Collins was greeted by smiling people speaking praise for Collins and National and congratulating her on last night’s debate. 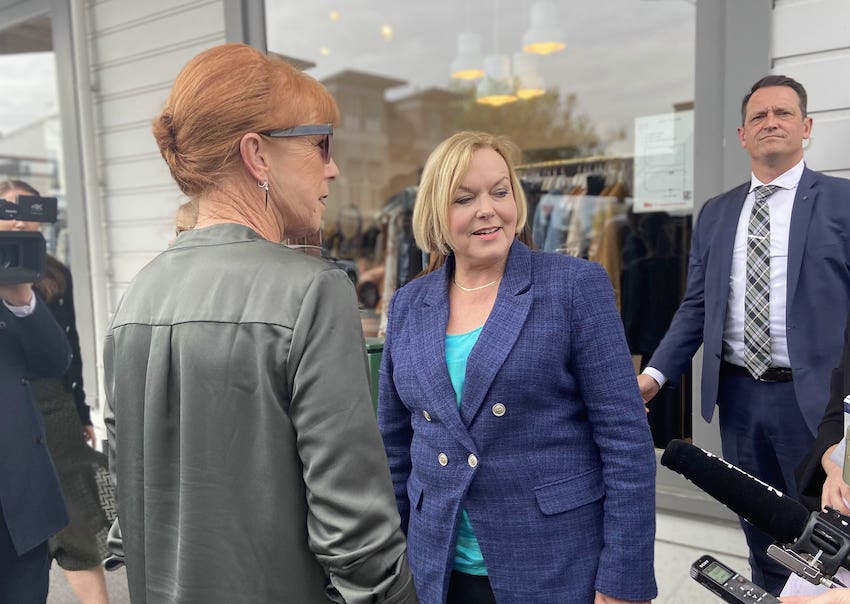 It later transpired many of them had been installed there for the cameras. National’s Auckland Central candidate Emma Mellow admitted as much when asked by media.

“I’ve got a lot of supporters here in Auckland Central and they wanted the opportunity to meet Judith so I invited them along”, she said.

Collins brushed away questions about why the party had invited so-called “locals” down to meet her, saying the lack of real people was evidence of a lack of foot traffic in Ponsonby, caused by economic downturn.

Most shops seemed happy to accommodate Collins and the throng of media following her. She visited a florist, with Mellow picking out a bunch of flowers for her fiancé’s birthday.

Not all stores invited her in. “We don’t want you here,” a retail worker at the optometrist Oscar Wylee said, giving two thumbs down. A National staffer suggested it was the large media presence that put them off and nothing to do with politics. The store attendant later confirmed they were no fans of Collins.

Arriving at Ponsonby Central, Collins sat down at a cafe table next to an M&M poll showing Labour far in the lead. 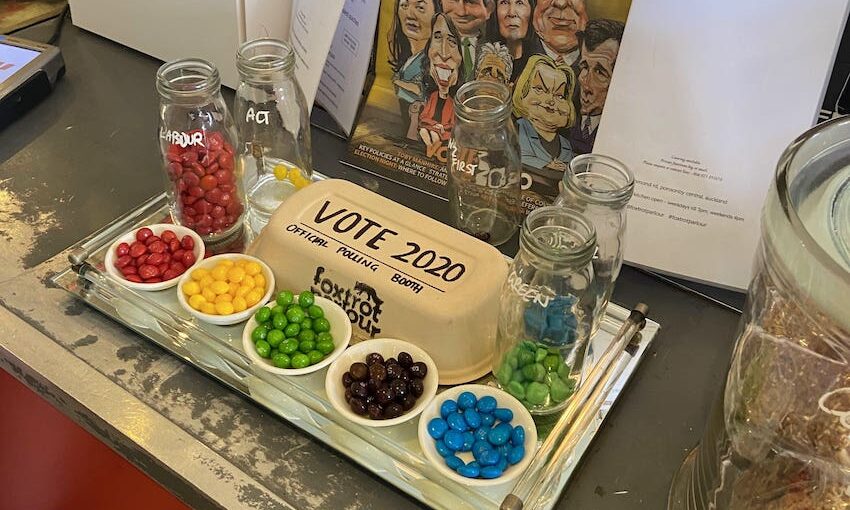 If M&Ms could pick the next parliament, Labour would be governing alone, with National equal to the Greens. New Zealand First had just one, lonely, chocolate.

While waiting for her drink to arrive, Collins was greeted by the first unambiguously genuine fan of the walkabout – a small child who said there was a picture of the National leader on her fence at home. She said no to a photo with Collins, though. Moving back outside, Collins – flanked by Mellow and Mount Albert candidate Melissa Lee – addressed the media, in an antagonistic press conference largely dominated by National Party politics rather than policy.

Denise Lee’s leaked email was brought up, as was Gerry Brownlee’s attitudes toward the media.

“I think it’s really important that we’re focused on what matters,” Collins said, trying to move the questions away from internal ructions. “Gerry’s working really, really hard and sometimes I think that people say things in the heat of the moment that they occasionally regret.”

Collins rejected claims that the “strong team” slogan on her party’s billboards was no longer true. She would still be National leader after an election loss, denying reports a possible coup could be mounting against her. Her MPs don’t want her gone, she retorted.

When asked about the allegedly unplanned photo-op of her praying this week, Collins said maybe some journalists need to spend a bit more time in church. “It probably did some of them good,” she said.

Asked if outgoing MP Paula Bennett should “zip it”, following a series of tweets yesterday, Collins said she wasn’t concerned about someone who was leaving their role in about a week’s time.

And 15 minutes later, it was over. “Dear God,” Collins said under her breath as she walked toward her waiting car.