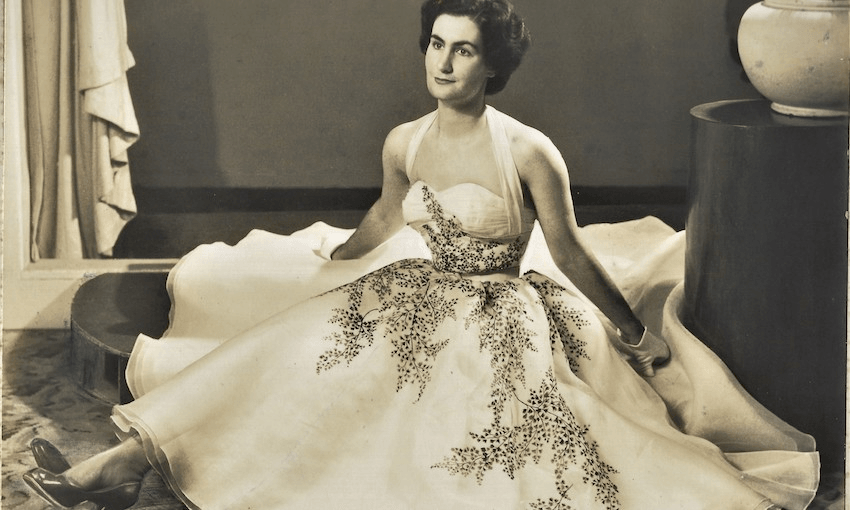 A certain style: moving fashion forward by looking back

By Doris de Pont
Guest writer
Made possible by

To mark 4 Days of Fashion in the City, four of downtown Auckland’s fashion personalities are sharing their experiences of the industry. Today, founder of the New Zealand Fashion Museum Doris de Pont celebrates the legacy of Bruce Papas.

Fashion is synonymous with change and while the 4 Days of Fashion in the City is providing the opportunity to focus our attention on what is new in fashion, it is also inviting us to take a close look at what we used to wear and how that reveals some of the complexity and changes in our culture and society.

In the exhibition A Certain Style: Bruce Papas on at Smith + Caughey’s on Queen St from 19th March, the New Zealand Fashion Museum presents an overview of the work of a single designer. It is a historical story that starts in the 1940s when Bruce Papas began his training and covers the decades until 1990 when he made his last couture gowns. Through a display of exquisitely detailed and carefully crafted garments and fashion sketches the exhibition paints a vivid picture of the changes in fashion and society, and how people participated in both. While this exhibition is an echo of its time, it still resonates today.

When Bruce started his apprenticeship in 1946 the long shadow of the Second World War had not yet lifted. Wartime shortages of materials had led to government restrictions on the amount of fabric that could be used in a garment and so skirts had got narrower and hemlines went up. What was available was limited and creative designers worked within these parameters, using clever seaming, appliqué and embroidery to embellish their otherwise austere suits and dresses. Flora MacKenzie of Ninette Gowns in Vulcan Lane was one such creative who specialised in the use of embroidery and it was in this role, designing embroideries, that Bruce Papas began his fashion career. As well as designing and making intricate beaded collars, lapels and peplums, over his five year apprenticeship Bruce learnt the fine art of draping a dress and how to tailor a sophisticated suit.

By the 1950s the country was getting back to normal; the economy was growing and so was the country’s prosperity. This new order was mirrored in people’s wardrobes as they acquired more clothes. Special occasions such as 21st birthdays and weddings were marked with lavish celebrations and elaborate dresses which meant that Bruce’s new skills were in great demand. Glamour and romance, as seen in the Hollywood movies, were our inspiration and coloured our aspirations. In Paris Christian Dior had reinvigorated the city’s reputation as the fashion capital with his ‘New Look’. This soft feminine silhouette with its narrow waist and long full skirts was in evidence everywhere and was interpreted for the New Zealand market by manufacturers and designers such as Bruce Papas, whose beautifully detailed and annotated fashion sketches are included in the exhibition.

High fashion was in again and became accessible to a bigger market. Couture had always been the preserve of the exclusive salon; now department stores joined them in offering one-off couture pieces. Auckland’s most fashionable department store of the day, Milne & Choyce, employed Bruce to work exclusively for them designing seasonal couture collections and their high fashion ready-to-wear range. Fashion was celebrated in store with an entire week of parades showcasing the latest styles, for which people bought tickets. The new seasons’ window displays were much anticipated – they were known to cause pedestrian chaos as people crowded the Queen St footpath to get a glimpse of the latest styles, which they might either purchase or sew a copy of at home.

While the decade saw a flourishing of fashion, it also gave birth to the teenager; the 1960s were to become their time. These young women didn’t want to look like their mothers. A new generation of designers such as Courreges in Paris and Mary Quant in London showed the way. Out went the womanly dresses with their busts, hips and nipped-in waists and in came the straight lines of the shift: simple and short, made for freedom of movement and action. And this new youthful spirit trickled up into high fashion where styles also became less structured and shorter. On show in the exhibition will be some of Bruce Papas’s cleverly cut dresses from this period.

Television had arrived in New Zealand in black and white in the 1960s but by 1973 the world it presented had become coloured. What we now saw was more diverse and so were our wardrobes. This was the Age of Aquarius, the time of hippies, women’s liberation and bohemian (boho) style. Men and women wore jeans, bell bottom pants and platform shoes, an abundance of psychedelic prints, paisley, velvet and embroideries on kaftans. The silhouette was fluid and there was plenty of scope for the individual to express his or herself.

As the next decade began, women had been ‘liberated’ and were participating actively and assertively in the world of finance and business, and fashion reflected that. Everything at the top was brash and large – hair, earrings, lapels and shoulders. Confidence in colour and embellishment mark the 1980s and the Papas pieces that are on display from this, his final fling in fashion, are certainly his most flamboyant and epitomise the spectacle that is intrinsic to fashion.

Next time you look in your wardrobe, in the shop window or online, think about how it connects you to a time and place. What we choose to wear, what its inspirations are, how and where it is made, where it is bought, how and where it is worn – all provide a lens through which we can see our world and the things in it we value. That was true for Bruce Papas and it is equally true for contemporary fashion.

This content was brought to you by Heart of the City. The New Zealand Fashion Museum presents the work of New Zealand designer Bruce Papas from 19 March – 1 April at Smith + Caughey’s.

4 Days of Fashion
Made possible by