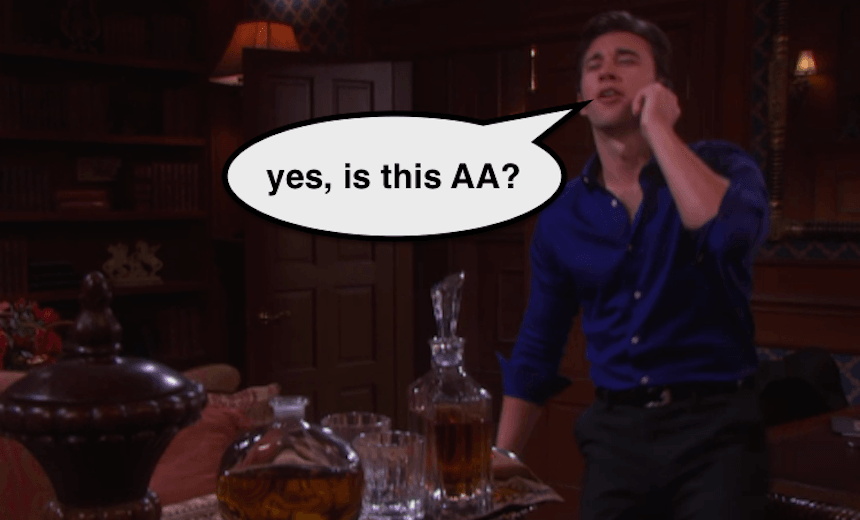 Days of Our Lives: Like Sand Through the Hour Glass, Here Are Some Unavoidable Truths

Alex Casey watches the first returning episode of Days of Our Lives, and notes a few things you need to ease you back into the extraordinary soap.

One of the longest running scripted television shows in the entire world, Days of Our Lives has washed back up onto our shores courtesy of Lightbox this week. Five episodes a week. For possibly all of eternity. Pour yourself a scotch and get your love triangles logged – it’s going to be a bumpy and confusing ride.

Days of Our Lives last aired in New Zealand on Choice TV in April 2014, which might as well be 300 years in soap time. Just long enough to see vicious murders, sordid affairs and the odd person getting trapped in a sarcophagus (true story). The sand can run awful quick through the Days’ hour glass.

In the past year, we’ve missed plots to burn ex-husbands alive, the death of a local “sexy sociopath” and willy nilly fetus burglary. Probably the most important storyline in recent years was the introduction of the first gay characters in 2011, followed by their marriage in 2013. That, and a physical fight involving red hot fire pokers.

I decided to jump in at the first returning episode on Lightbox, and find my way through the mass of lingering stares, dramatic reveals and oceans of booze. If I’m honest, I enjoyed every moment of it. Based on one 39 min encounter with the show, here are some things you need to understand about the current Days of Our Lives universe before launching in.

The episode opens with Stefano pouring a 100 year old scotch in the first of many mahogony offices. He calls his son, who is also drinking. What is this alcoholic phone tree? In case you were wondering, men drink the scotch and women drink endless glasses of wine at all hours of the day. I’m not surprised, their taps definitely don’t look functional anyway. Here is the mecca booze shot of the episode:

2) Adrienne has cheated on Victor

Victor is a wealthy old business owner who loves Scotch, Adrienne is his hussy wife who loves sleeping with guys called Lucas who have bicep tattoos. Caught in the throes of passion via Victor’s CCTV footage, this affair leads to Lucas getting fired, Victor hitting the bottle and Adrienne despairing alone in this exotic “nature” simulation.

3) The era of fashion is deeply unclear

An incredibly bizarre aspect of Days of Our Lives is that it exists in a vacuum, so far removed from time, space or any graspable culture. Through the sea of suits, shiny power jackets and clip-on earrings – I found one item of clothing quite jarring:

It’s one of those fancy bras, the fancy bras that people always regram endlessly to try and win around Valentine’s Day. The psuedo-bondage bras that could possibly be the lingerie-definer of the modern age. The type of bra that is about as timeless as Natalia Kills.

With that said, there’s also a maître d’ clearly wearing a tracksuit so I still don’t know what terrestrial realm we’re living in:

Someone has ripped into the Amaro instagram filter and they don’t care who knows it.

Very important point to be aware of: be fully prepared for every scene ending with a pull back and reveal of someone walking around the corner and saying “Mom?”

6) Ben is in trouble with Walenski

This guy Ben is in major vague trouble over someone called Walenski about something to do with gambling somewhere in the greater Florida region. That’s why he has a lawyer around to shuffle yellow papers on the couch and not answer any questions clearly.

7) Everyone has a history

There will be a normal conversation, and then something like this will happen:

Everyone is holding grudges, they can’t let anything wash away in the Days realm because there is clearly no running water. Or rain. Or air.

8) Sonny and Will are fighting

Days of Our Lives has not only welcomed gay characters, but shown they can bicker with the best of them for the entirety of an episode. Now that is equality.

9) Don’t expect to see the sky

The Days universe appears to have no atmosphere. You’ll feel yourself going a little crazy when you realise there is no evidence of the outside world at all, so the sooner you farewell the sky, the sun and the moon, the better. It does raise questions as to how they are all so deeply tanned, though.

What I’m saying is, this is unmissable television. Make this soap part of your daily routine. Then rinse, lather and repeat. Forever.

Before you burn down that mansion, pour yourself an urn of Scotch and click here to watch Days of Our Lives on Lightbox – or start your FREE trial.