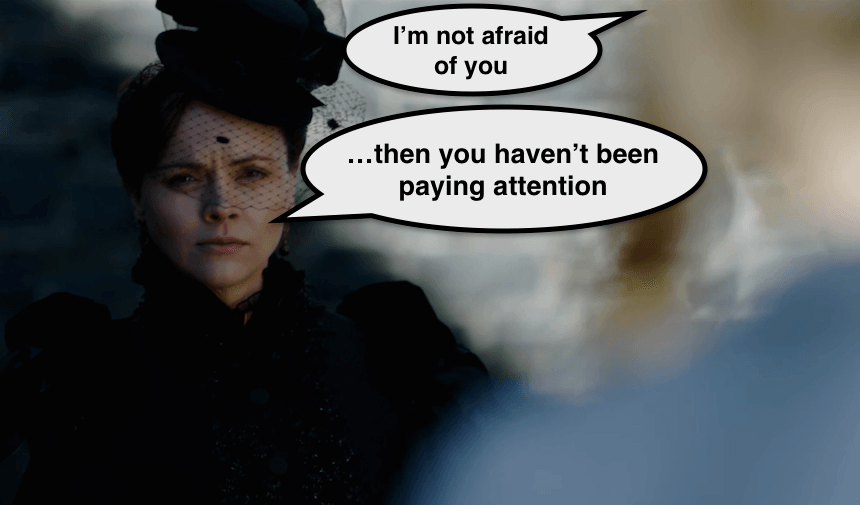 A Field Guide to: The Puffy-Sleeved, Blood-Soaked Madness of the Lizzie Borden Chronicles

Here is all you need to know about The Lizzie Borden Chronicles before picking up an axe and hacking into the pulpy period drama.

The Lizzie Borden Chronicles is a fictionalised account of a fascinating true story. In 1892, Lizzie Borden’s stepmother and father were hacked to death with an axe in their own bed. At the time, Lizzie claimed to be in the barn eating pears, and was alerted by the screams of the maid. But she gave contradictory and suspicious information in her statement, and was put on trial for the murders.

Lizzie was acquitted due to lack of conclusive evidence, but had already reached David Bain-level celebrity status and controversy. Nobody was ever charged for the murders, and she remained the prime suspect till her death. This intriguing case was brought to life in the Chronicles prequel TV movie Lizzie Borden Took an Axe, also starring Christina Ricci. Poor Ricci, she hadn’t been around this many dead people since Casper.

The Lizzie Borden Chronicles picks up several months after the acquittal, as Lizzie and her sister Emma are adjusting to life in the bloodstained limelight. Trying to start again in a new town, the same old problems start to crop up. You know – financial woes, troubled relationships… a series of gruesome and mysterious murders. Basically, board up your houses – the Bordens are coming.

The series starts off slowly, working through a fair bit of admin before axes start swinging. The first few episodes are about Lizzie and Emma adjusting to their new surroundings, signing contracts and settling debts. Once that is out of the way, the real fun begins. From about episode three the body count starts to rise, and you’ll find it very difficult not to slice through the whole season in one brutal swoop.

It’s an incredibly stylish show, alternating between the slow-mo gruesomeness of Spartacus and the smouldering tension of American Horror Story. But I wouldn’t say it’s strictly a horror, more of a Tarantino-style bloodbath unfolding in a very terrifically creepy era. Lizzie is the perfect female anti-hero, reminiscent of Breaking Bad’s Walter White with much better hair.

Like Walt, she falls deeper and deeper into her own delusional evil schemes, all the while with local authorities lurking closer than ever before. Prepare to be hating on Lizzie, cheering for Lizzie and having night terrors about Lizzie.

Lizzie Borden: The black widow, innocent until proven guilty, seems to get away with murder due to her enormous eyeballs.

Emma: The loyal sister who harbours some dark secrets of her own.

Agent Charlie Siringo: Based on the true Pinkerton detective, determined to prove that Lizzie was wrongly acquitted.

What are the killer lines?

The costuming is exquisite, featuring an astounding array of bowler hats and ever-expanding sleeves. Keep an eye on the shoulder puffs as the series progresses, I’m almost certain that they grow bigger with every death. By the end, she’s essentially just wearing a giant goon bag on each shoulder.

Also look forward to a stunning cameo from Breaking Bad’s Mike Ermentraut in episode three. I mentioned the parallels to Breaking Bad earlier, but they become even more apparent when Mike arrives as hit man/pimp called Mr Flowers to help Lizzie to do her dirty work. It’s just Breaking Bad – lady version.

The soundtrack also takes some interesting twists and turns, embracing music from over 100 years into the future. Blu Cantrell, anyone? Just because it’s the 19th century, doesn’t mean they can’t ‘Hit ‘Em Up Style’. Listen out for it in episode two.

Wait till the cover of nightfall. Draw the curtains, light some candles and tape an inflated cask wine bag to each shoulder. Don’t look under your bed and do NOT go into the attic.

The final episode of The Lizzie Borden Chronicles arrives express from the US on Lightbox tonight, click here to catch up before the final axe swings.

Sign up for your free Lightbox trial before the 31st May and be in the draw to win a pimped-out lounge including a 55″ Samsung curved TV, MacBook Pro, PS4, iPhone, iPad and so much more.