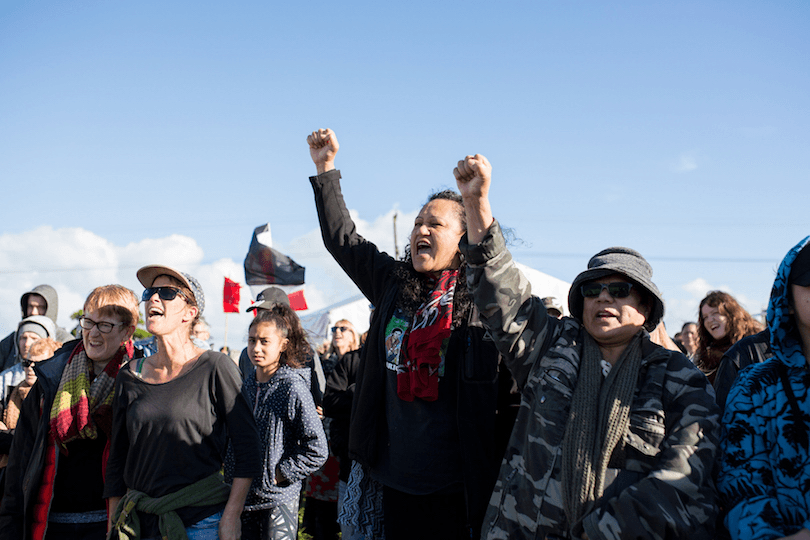 The fight to save Ihumātao has been raging for years. Now, with the arrival of the Fletcher diggers imminent, the kaitiaki are staying true to their peaceful, positive protest approach.

On a sunny day out in south Auckland, the handful of people at Ihumātao are stuck into work early, painting chairs, stacking firewood and cleaning up the toolshed.

Qiane Matata-Sipu is one of these people, greeting me into a cowshed-turned-meeting house named Kaitiaki Village, to introduce me to the history of Ihumātao.

Posters with historical information about the land line one exterior wall of the shed and inside are a medley of mismatched couches and chairs.

A makeshift cinema screen hangs against one wall, made from an old sheet and some duct tape, and Matata-Sipu laughs as she points out the drooping fabric.

She’s one of six cousins who, five years ago, formed Save Our Unique Landscape (SOUL) to fight against a 400-house development on the whenua.

It was a humble beginning for SOUL, which Matata-Sipu traces back to a discussion in her dining room.

And since then it has stayed relatively humble, though support for the movement has multiplied, with solidarity groups popping up in Wellington and Nelson, and the movement being backed by Russian activist punk band Pussy Riot during their New Zealand visit in 2018.

It’s been almost a month since Fletcher Buildings Limited got their warrant to shut down the Ihumatao Quarry Road that leads to the historic Otuataua Stonefields and Kaitiaki village. The residents and supporters at the village had a presence at the top of the road on the first day, May 6, but there is yet to be any sign of police, Fletcher – who insist that their property is being illegally occupied – or their diggers.

A piwakawaka that follows Matata-Sipu inside the converted cowshed would be considered a bad omen in some iwi, but she explains in her hapū it’s a good sign.

“It’s the bird that connects us to the other side, and so for some that’s a bad thing, but around here that’s a good omen. That they’re coming to visit means they support and agree with your kaupapa.”

It seems no wonder that her tūpuna would tautoko the fight to save the land they once lived on and off, the fertile volcanic soils surrounding three of Auckland’s volcanic peaks provided food for the whole city once, but the land has not been farmed for food in years.

“Ihumātao was a thriving place and it was the pātaka papa-kai of Tāmaki Makaurau. Because we’re in such fertile soils, the food we would grow was so plentiful, and would feed the masses … we could still be growing food for people here, the communities of south Auckland need food.”

While their immediate fight is with property developers Fletchers, SOUL’s pleas for help are directed towards the government. In 1863 Ihumātao was confiscated by the crown as a punishment for supporting the Kīngitanga movement, and Matata-Sipu says since then, the government and council have not done enough to make reparations.

In 2017 Fletcher’s said they would be open to offers to buy the land back, setting their price at $40m. For local iwi and the kaitiaki of the land, this price was entirely unrealistic, but Matata-Sipu says it should be up to the government to right their wrongs.

“What they’ve said is they don’t have $40m to spend on this, and I think that’s a bit of a cop-out… There are always ways that you can create partnerships, have different groups come together and resolve the issue.

“We need to protect the whenua for future generations, and finally after hundreds of years, allow the people of Ihumātao to be active kaitiaki on their whenua.”

The kaitiaki of Ihumātao are sceptical of a government that promised them so much leading up to the 2017 general election. Matata-Sipu says she hasn’t seen much action from some of those who promised it.

“It’s a really interesting journey to actually see how politics works in this country and to see how when politicians are in opposition they will promise you anything and everything, but when they get into power they forget about you.

“Jacinda talks a lot about leading with kindness and she talks about strengthening relationships with our Treaty partner, us, as Māori. Where is she living and breathing that whakaaro in regards to Ihumātao?”

The movement has its supporters in parliament. Green Party co-leader Marama Davidson has been vocal in her opposition of the Special Housing Area, and spoken at events on the whenua. On March 12 a group of SOUL members presented a petition to save Ihumātao to parliament in Wellington. On this same day, Davidson and Green Party co-leader James Shaw presented a letter to the prime minister asking for urgent action.

“This land is of rich cultural and national significance and embedded with identity, whakapapa and history. The development would run adjacent to wāhi tapu, the Ihumātao pā, and the Ōtuataua Stonefields.

“As your support party in this government, we are concerned that there is a risk this dispute may spiral out of control and we feel it merits a government intervention.”

A Green Party spokesperson said there had not yet been any formal response to the letter from the prime minister.

“It makes me question that if you’re in government with the party and you’re ignoring them, what kind of relationship do you have with your coalition?” asks Matata-Sipu.

Podcast: ‘The fight for Ihumātao is a fight for all Aucklanders’

Matata-Sipu is positive that their years-long protest, established on the idea of rongo, won’t culminate in violence.

It’s also waste-free out at Ihumātao, the kaitiaki live off the land, recycling and composting any waste they create. Visitors are encouraged to bring their own food and water bottles and to take anything they bring with them when they leave.

“We’re parakore here. We ask that visitors be self-sustainable so that we’re not putting too much pressure on resources or the kaitiaki who are here all the time, and then make sure they take all those things back with them.”

Two women outside painting chairs listen to reggae from a speaker in the wharekai as they work. They’re eating Subway cookies and laughing at the ridiculousness of the Uber Eats delivery driver coming all the way in to Kaitiaki Village.

The history of Ihumātao is shrouded in loss, but despite this, the village is home to a real sense of happiness and hope. While protest is what brought the whānau back to the land, it seems to be more than just protest that’s keeping them there.

“We live here, this is our whenua, we’ve been here for 800 years and we’ll be here for 800 more and if it’s not me it will be my daughter. I’m so actively involved in this kaupapa and sacrificing time with my family now because I don’t want her to have to do this when she gets older, so she can just be and not have to fight and not have to try to protect her whenua and assert her rights and right the wrongs of her past.”

Fletchers has 18 months from May 6 to close the Ihumātao Quarry Road, and force the SOUL protesters off the land. Matata-Sipu doesn’t think Fletcher have all the necessary paperwork to do so yet, and is holding on to hope that someone steps in to help them claim back their whenua before it comes to confrontation.

“You have to be hopeful, if you lose your hope you have nothing left … This is all a part of history and what we’re asking people is: What side of history do you want to be on? How do you want to be remembered? This is our whenua that we are so strongly connected to, so what have we got to lose?”