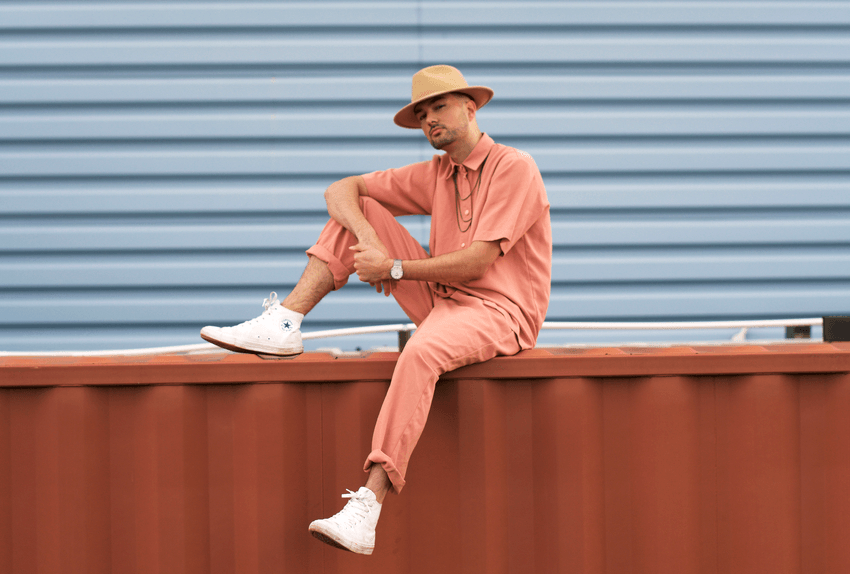 Rei’s new album wears its purpose on its sleeve

Rei is an internationally successful, award-winning musician who can rap, sing, produce beats, and even tell a couple of jokes. He talked to The Spinoff about Ariana Grande, meditation, and writing music as self-encouragement.

The winter sun is warm, and so is Rei. He’s the kind of person who puts you at ease straight away. We sit outside a Morningside café and he talks about learning to take moments for himself. “I went for a bushwalk yesterday, because it was a nice day,” he tells me.

Environment is important to Rei – symbolically and literally. His guiding principle is that of being “chiefly,” of taking control of your environment. His last albums, Rangatira and A Place to Stand, were grounded in the concept of rangatiratanga, of ownership of yourself and your surroundings. “It’s funny, because I wrote it for myself,” he admits. “I don’t always feel like a chief.” He wrote the positive content as self-encouragement. “If that encourages other people, too, that’s great.”

Rangatira is a singular album. It’s got great hip-hop beats, high-level production, great hooks, and is recorded entirely in te reo Māori. Like all his music, it’s distinctly Kiwi but still different from anything other local artists are making. New Zealand on Air has an unprecedented level of talent on its airwaves, and Rei is one of its champions.

With his new album, The Bridge, he’s showcasing his global-level talent more than ever. “I am a bridge between all these different things: genres, cultures, people.” Rei blends hip hop with pop, English with te reo, producers with performers.

Even his approach to his home genre is something new. “All throughout hip-hop’s history there’s been more positive stuff, it’s just not been what sells the most,” he says. “But again, I’m trying to be that bridge! The bridge between positivity and something that is appealing to the masses.”

The positivity is infectious in the first single from The Bridge. ‘Good Mood’ is such a strong pop song that it knocked Ariana Grande off a chart in the U.S. “Shame, Ariana!” Rei laughs, and grins at me. “Nah, I’m just flexing – it knocked her off on the viral charts.”

He’s right to be stoked about this achievement. “People think writing pop is easy, but you’re trying to write a song that connects to the majority of people,” he explains. The concept is always the most difficult part. “Once you’re in the zone, it writes itself. To get into the headspace and for the stars to align – that’s harder.”

‘Good Mood’ is a fun, party-friendly song, but The Bridge isn’t all like that. “Toward the end of the album I go pretty deep,” he admits. “It’s pretty scary to play it to people, but it helps get my thoughts and feelings out there.” He takes one of his many thoughtful pauses. “I hope it helps other people as well.”

The Bridge is (so far) only recorded in English. Rei is very self-aware, and it’s not hard to imagine how that influences his music. The singles released from his album so far are pretty introspective. “Yeah, there’s a lot more depth than my last songs,” he smiles. “It’s quite a lot deeper, this album.” His previous work frequently intertwined the personal with the political. This album? “It’s still got that political charge, I guess.”

Te Pukumeke is a song Rei wrote with producer Baitercell (Chris Chetland) last year. The video for it was released last month, and it’s got a big political charge. It’s an environmental call to action. “In English, it would sound cheesy,” he laughs. In English, a song about protecting waterways from agricultural run-off could risk using cliché. In te reo, the lyrical space is freed of this.

Rei studied Māori at university, where he learned to free himself of more formal language structures. “It’s easier for me to write politically in te reo, because it naturally — for me — sounds less cheesy,” he explains. Only one of the singles from The Bridge so far is done in te reo. “I want to make that a habit,” he says. “You see a lot of bands doing that now. It’s a pretty cool trend.”

The title of The Bridge came to Rei in May. He came to realise his role — as a musician and as a person — at a ten-day meditation course an hour north of Auckland. There was no phone use allowed, and no outside contact. This is where he understood and embraced being a bridge. “I’m not anxious about being one or the other. I can just be me.”

In the same position, many other people would feel a little pressure. We’re about the same age, and I remind him about what it was like when we were coming up, seeing Scribe and realising what New Zealanders could achieve. “I’ve been thinking about that a bit lately,” he says. “All of the teenagers listening at the moment, who might look up to me like that. I try not to overthink it, really.”

I ask if he sees himself as a role model, and he takes one of his biggest pauses yet. “Yeah.” He pauses again before continuing. “I am careful about making sure what I say in my music fits with the kaupapa. I listen to a lot of hip hop, and it’s a little behind the ol’ #metoo movement sometimes. I try to keep things positive,” he smiles at me, “keep it chiefly.”

He takes his time answering questions not because he’s worried; he’s just contemplative. Like all the best musicians, Rei sees his work as an exercise in self-expression with audience approval as a fun bonus, not a necessity. He wants to get it right. He likes to push the envelope not by following trends, but by honing them. “Over the past two years I’ve tried to re-work my songwriting,” he tells me. “I’ve tried to tick a few more boxes when it comes to good hooks, things like that.”

The Bridge is the checklist of an artist doing the absolute most. “I solo produced 12 out of the 14 tracks, and those other two songs I’ve added my own thing to,” he says. He’s already thinking about the future of his production. “Now that I’m getting busier, it’s going to be hard to make all my own beats. I just don’t have time.”

Rei likes to be involved with every stage of the musical process, but he’s no control freak. He loves help from others. Chris Chetland is his “mentor slash co-manager slash life coach.” D. Love is one of Rei’s most trusted producers. “I think I have six collabs on the album,” he tells me: two tracks with other producers and four with other vocalists. “When I work with other vocalists I never just send a beat off for them to write to; it’s me in the room, working on it and helping,” he says. “It’s collaborating. Especially because, well, it’s my song. They might have some lines that don’t fit the kaupapa.”

The kaupapa of The Bridge is as personal and political as anything Rei’s written. With each new album, he ups his game once more. At an APRA SongHubs event, he got to write a song with Jenna Andrews. “She’s written with Majid Jordan, and Drake, and Diplo — people like that. To be in a studio with someone like that and have your ideas valued was pretty cool.” These are huge names, but Rei’s skillset stands up to all them.

This piece, as well as The Bridge, was made with support from NZ on Air. The Bridge is out on July 26th