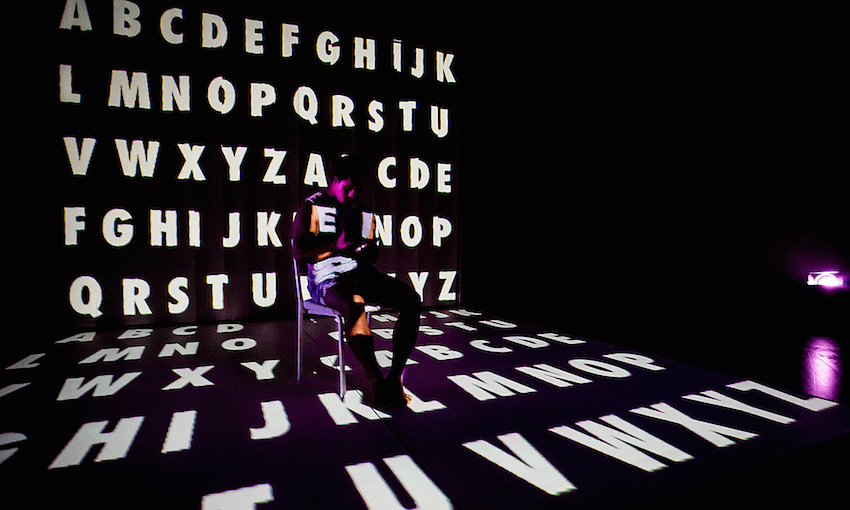 Jacob Dobrowski is the creator and performer of Everybody Cool Lives Here’s show Big J Stylez, directed by Rose Kirkup.

Jacob Dobrowski is the creator and performer of Everybody Cool Lives Here’s show Big J Stylez, directed by Rose Kirkup.

From the two of their shows that I’ve seen – Rose Kirkup’s I Am Tasha Fierce, a solo show about a Lower Hutt woman who idolises Beyonce, and Duncan Armstrong and Isobel MacKinnon’s Force Field, a love story just as much about finding a way to express love as it is about finding one that is reciprocated – they’re a company who is doing some of the most thematically ambitious and visually inventive work in the country.

And they’re getting awards for it, too. Force Field made an impressive sweep of the Auckland Fringe Festival, picking up awards for Best Performer (Theatre), Best Director, the Auckland Live ‘Free Your Mind’ Award and Best Overall Production Design.

The company’s latest work is Big J Stylez, a solo work written and performed by Jacob Dombroski, née Te Amo (Ngāi Tūhoe, Ngāti Porou). The show explores Dombroski’s passions: music, dance and acting, weaving a story that brings the audience in to become a part of his whanāu.

I talked to the artistic director of Everybody Cool Lives Here, Rose Kirkup, about developing her company (which she runs with her partner Nic Lane), how her friendship with Dombroski informs the work Big J Stylez, and her hopes for both Jacob and the show in Auckland.

Can you tell me about the kaupapa of your company, Everybody Cool Lives Here?

Everybody Cool Lives Here is a company that me and Nic started a few years ago, mainly just because we wanted to make our own work. Then, from there we have predominantly worked, I guess, with young people with intellectual disabilities.

I guess our kaupapa is changing all of the time, but a lot of it is to do with supporting people who normally don’t get the kind of resources or opportunities around them in the arts, or really, in anything. We want to be be able to put support and resources around them so they can find their creative voice, to make art that they believe in and then hopefully that will not just help them make an awesome show, but also support them to live fuller and greater lives, and own their stuff.

The one thing that is difficult for us, in terms of what the kaupapa of our work is, is that we get defined a lot by other people as being an ‘integrated company’, and an ‘inclusive company’, but the people that we work with, they don’t actually want to be labelled at all.

For example, Jacob doesn’t identify as having Down’s Syndrome. We got offered a spot in a festival that was purely for disability arts and Jacob was like, ‘I don’t wanna do that, because I am an artist, I wanna be free to be in all platforms and not just go into a platform where I am seen as my disability.’

For us that’s kind of a thing that we’re always searching for, like how do we just be seen as a company of people who supports artists to do the best work possible, in the most meaningful ways.

So how do you decide what work you guys actually make? You must have a lot of performers that you work with, and your work is so varied.

I think a lot of the work that we do comes from personal connections that I have with people out in the community. I met Jacob when I was working as a support worker at a youth service for young people with intellectual disabilities, and I decided that it would be a good idea if we made a show with them.

I approached Sherilee [Kahui] because she was doing her Masters in Directing at the time, and we made this community show Wake Up Tomorrow – it had heaps of people in it. And we’ve continued to foster the company and the people we work with, like Jacob and Duncan [Armstrong]. We just see those guys as other artists in our community who wanna grow up with us.

It’s happened really naturally. Especially with Big J Styles, through doing those bigger shows I wanted to get to know all of the people that I was supporting more personally, because I think when you’re born with a difference, your parents and your family are way more a part of your life than an average 25 year old.

How did you develop Big J Stylez – what was that process like?

So I met with his mum and him, just to find out where he was born. Basically, Jacob’s last name is Dombroski and he’s a a Māori Samoan guy, and it’s like, ‘Why do you have this last name?’

So I went to his mum’s house and found out about his childhood – about his experience with his perceived disability growing up and how he’s dealt with that. From my own personal experience as an artist, I know that making and writing a show can be such a great way personally to let go of some stuff and process it out. We talked about his life and where he was at and what his hopes and dreams were.

The way we would write the show is, we would just talk, he would come up with the lines and we would write every separate line of the whole show out on a post it note and storyboard it out.

That was a huge turning point in the writing, because for so long he’s been able to keep his head down and hide in a book. But as soon as we could get his head up and and he could read the words in front of his face, it’s been incredible to see the amount that he has retained and how his writing has completely transformed.

As a director, how do you keep the performer safe in this kind of work?

The thing is, the way that I keep him safe is I don’t baby him. I don’t treat him any different then I would any other performer. Jacob’s completely integrated into our life. He’s one of my closest friends, and I would never put him in danger. We also have a really, really strong relationship with his family.

So what are your hopes for the Auckland Season?

I mean, we want people to come out and see it, obviously. Our hope is that we’ve been able to empower Jacob as best we can to put his best foot forward, and we’re hoping that by him being out in this community some other opportunities for him to continue his life as a performer will come out of that and other people in the community will be willing to support him.

You can book tickets to Big J Stylez here. It runs at the Herald Theatre in Auckland from July 4 – July 7.