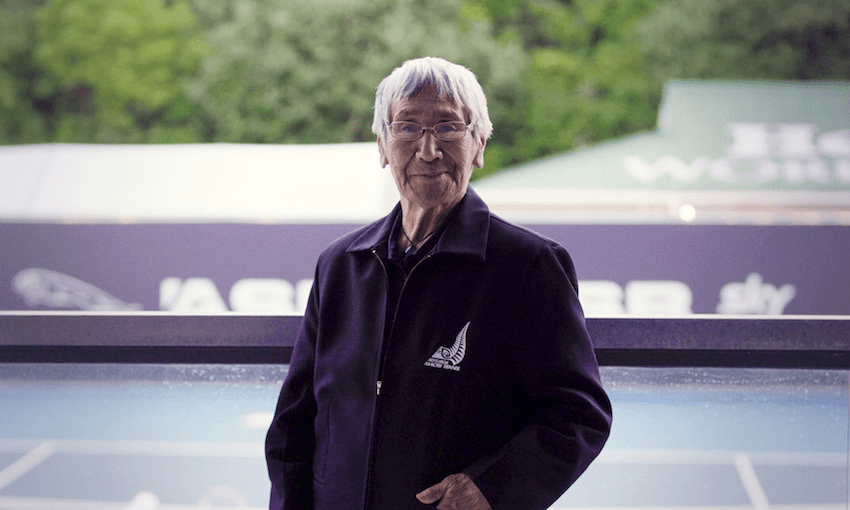 It took 60 years, but Ruia Morrison has finally been recognised as a tennis legend

In a classic case of better late than never, pioneering Māori tennis player Ruia Morrison was honoured at the 2020 ASB Classic in Auckland.

She looked so small, standing on a tennis court with Kiingi Tūheitia on one side and Serena Williams on the other. In her slightly-too-large blazer she looked too small to have been able to cover the court with any real authority, at any time. But she was Ruia Morrison and, besides Williams, she was the most decorated player in the arena.

Morrison, born in 1937 in Rotorua, had played and won on the very same court. In 1960, Stanley St (as the court was named then) was grass, and grass was Morrison’s specialty. Wimbledon had been grass when she competed there in 1957, and the tennis court opposite Te Koutu Marae was grass. Morrison was scheduled to compete in the New Zealand Championships at Stanley St, but while she was the top player in the country at the time, she wasn’t the favourite to win.

Margaret Court (Margaret Smith at the time) was a 17 year-old phenomenon. She had just shocked the tennis world by dominating the Australian Championship (now the Australian Open). It would turn out to be the first of a record 65 Grand Slam titles for Court, cementing her as one of the greatest tennis players to ever set foot on the court. But in the summer of 1960, she had just made her name known and flew to Auckland for what should have been the cherry on top, a cruisy title win in New Zealand.

Instead she met one Ruia Morrison in the final. Morrison, whose strategy was all about consistency. Who let her opponents lose matches on their own. Court was young, six years younger than Morrison, and her immaturity showed. Morrison beat her in three sets.

No one at the time knew that Court would, from that moment on, dominate world tennis on her way to becoming the winningest champion in the history of the sport. No one watching at Stanley St knew that they were witnessing to world greats compete. And 60 years later, few New Zealanders know that a New Zealander is among the few players to beat Margaret Court. But Court remembers.

Terri Ann Scorer, the president of Tennis NZ, spoke to Court shortly before the ASB Classic this year. She told Court that Morrison would be honoured at the tournament, and that it would mark 60 years since their final at the New Zealand Champs. Court remembered the match immediately, in particular feeling “devastated” at the loss. Scorer asked how much she was able to remember of a match from six decades earlier, and Court responded, “I played thousands of matches in my career and don’t remember many of them. But you always remember the losses.”

You always remember the losses. Sitting in the Tennis NZ suite at the ASB Classic, watching Serena Williams and Jessica Pegula play on centre court below, Morrison didn’t remember much about losing to specific players. She never won a grand slam, having competed at what would later be the French and Australian Opens as well as at Wimbledon, but winning was never her primary concern. “I just wanted to get out on the court and play,” she’d say, whenever she was asked about winning or losing big matches. For someone who never saw herself as an inspiration or role model to others, Morrison was pleasantly surprised with the scale of her honouring at the Classic. Downstairs in the basement bar, a shrine of sorts displayed her international results, one of her playing dresses, and a life-size cardboard cutout of her mid-serve. “Legend recognition,” it proclaimed. “The humility, it hit me right here,” she said, tapping her chest. “To think that I would be worthy of anything like this happening, you know?” She spoke slowly, considering every word. “For someone who just wanted to sit on the court and hit a ball, not to win and not to lose, but just to sit there and enjoy the game.”

She paused to reflect as the crowd outside cheered a Williams point.

The Ruia Morrison korowai was brought into the suite for Morrison to see for the first time. Woven by Ngāti Whātua weavers, the korowai would be worn by the women’s singles champion each year, presented to them on court after the match. It was short, a length that would fit Morrison well. “That Ngāti Whātua should recognise my achievements in this way, that is really, really extra special because I’m Māori through-and-through,” she said. “I would love one of the Māori girls one day to follow those who have already gone before them. For someone to see [this recognition] and turn the lights on, maybe an epiphany or whatever, to encourage them to keep going.”

Serena Williams won the final in straight sets, claiming her first title since the 2017 Australian Open. It was what the crowd had wanted and the vast majority were still seated when Morrison and Kiingi Tūheitia walked onto centre court holding hands. As the presenter acknowledged the players, sponsors, and officials, Morrison stood on the baseline and held the korowai. And when Williams was formally announced as the 2020 singles champion, Morrison embraced her, shared some words, and watched as her korowai was placed on the shoulders of the greatest tennis player in the world.

When the photographers asked Williams to stand for a photo, she posed like a superhero.

“I was learning about it and I had no idea it was that deep,” Williams said later, during her winner’s press conference. “I felt really honoured and really, really special, especially with her story. There’s just so many things you appreciate so much, for me at least, as my career continues to go.”

In 1957, Ruia Morrison became the first New Zealand person of colour to compete in a grand slam. She played the best in the world, and beat her fair share of them. Despite her achievements, Morrison’s name was forgotten, unspoken by tennis enthusiasts and historians alike.

Serena Williams, along with her sister Venus, forged a path for young African American players, and became icons within the game. With 39 grand slam titles, the most by any player in the Open era, Williams will be remembered as a tennis great for decades to come. Her name will never be forgotten.

Every year, the women’s singles champion at the ASB Classic will be presented with the Ruia Morrison korowai. It took six decades but Ruia Morrison won’t be forgotten again.

Scratched is made with the support of NZ On Air.