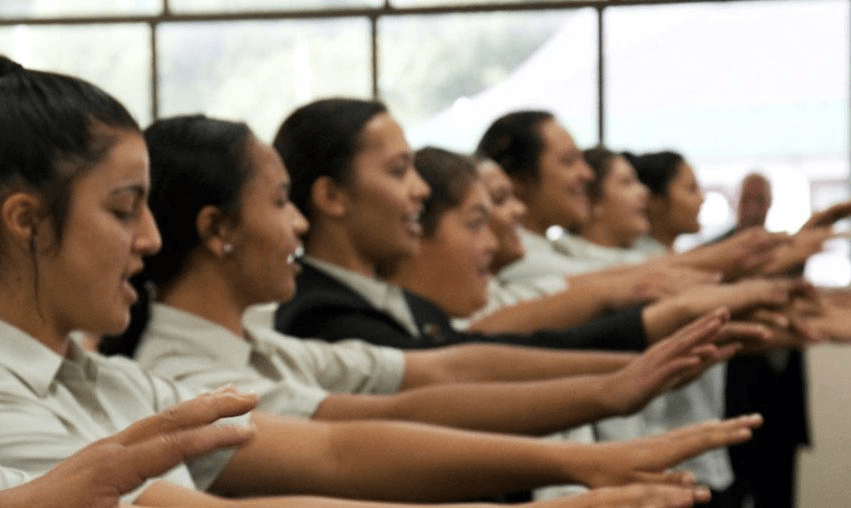 Charter schools are no silver bullet, but the principle behind kura hourua is a form of rangatiratanga (sovereignty) in action. The kōhanga reo example is a reminder that Māori education is too important to fall victim to partisan battles, writes Laura O’Connell Rapira.

The Anglican missionaries who arrived in Aotearoa in 1814 came with a mission: convert Māori from “barbarism to civilisation”. They believed their divine purpose was to replace Māori gods with their one. They believed their culture was superior to the native people of this land.

The first mission school was opened in 1816 in the Bay of Islands. More schools like it were built throughout Te Tai Tokerau (Northland), where I whakapapa to, over the next decade.

“Although Māori had whare wānanga (schools for teaching their own genealogy of knowledge), they wanted to send their children to the mission schools to access the Pākehā knowledge that produced large ships, powerful weapons and an amazing array of goods. Perhaps schooling would unlock the secret to this material wealth.” – Ranginui Walker, Reclaiming Māori Education

Māori at that time weren’t to know that most of the material wealth of the people who came here on large ships was gained by dispossessing other cultures and societies of theirs.

While the missionaries saw teaching Māori kids how to read as a conversion tool to the scriptures, Māori were more interested in understanding ships, firearms and tools. Māori who had attended the missionaries’ schools would return to their villages and create their own schools, taught in te reo Māori.

In 1847, George Grey, the governor of New Zealand, decreed that forced assimilation was the way forward for Māori. He believed the best gift the British could give the people of this land was to turn them into “brown Britons” so he instituted the Education Ordinance that gave greater support to the growing network of missionary schools. Schools that taught exclusively in English and favoured teaching religion and manual labour to Māori. This proved to be an efficient way to train up Māori labourers who would build houses for the colonisers in the future.

“I do not advocate for the natives under present circumstances a refined education or high mental culture … they are better calculated to get their living by manual than by mental labour.” – Henry Taylor, school inspector, 1862

This was the beginning of 150 more years of non-Māori deciding they know what’s best for Māori education. It was also the beginning of a sad intergenerational decline in fluent speaking of te reo Māori. A sadness that I, and many like me, carry with us today.

The reclamation of Māori education and language begins

It was a grassroots movement fuelled by concerned kaumātua (elders) and aunties determined to save te reo Māori from disappearing by teaching it to our tamariki (children) in marae (meeting houses) and community centres around the country. It was a movement that paved the way for kura kaupapa, primary and secondary school immersion programmes, as well.

By the end of 1994, there were 800 kōhanga reo with more than 14,000 students. Kōhanga were being established all over the motu (country), with very little financial assistance from the government. We were leading our own destinies to flourishing once more.

Then, the government decided kōhanga reo needed to be integrated into the state’s early childhood education regime. Prohibitive regulations were put in place. Damaging reports were written. Kaumātua who didn’t have the right government qualifications could no longer teach, and over the next 10 years the number of kōhanga reo in Aotearoa was slashed by half.

Today there are just over 450 kōhanga reo. Kōhanga are the biggest employer of both Māori women and men in any early childhood service. And as is stated in the Waitangi Tribunal report, “The kōhanga reo movement is a key platform for the retention and transmission of te reo Māori… and the survival of te reo Māori is critically dependent on them.”

Earlier this year, Education Minister Chris Hipkins announced all charter schools would have to close by the end of this year unless they succeeded in joining the state system.

Six of the 11 charter schools that will be abolished have a Māori roll of 87% or higher.

Charter schools were the brainchild of a National-ACT alliance and have been criticised heavily by teachers’ unions because of their privatised nature.

Teachers want more money and resources going into delivering the best state school education possible, whereas proponents of charter schools say public education can’t deliver for everyone and that, in particular, it has failed Māori.

Kura hourua (or charter schools) can provide an alternative to this low expectation-setting environment.

Te Kāpehu Whetū in Whangārei is a bilingual and coeducational school that was set up four years ago by Māori community leaders appalled at the high failure rate of Māori boys in state schools in their rohe (area, territory). Only 19 percent were gaining basic NCEA, and many were dropping out. But last year the school’s University Entrance pass rates were the second highest in Northland and above the New Zealand average. A key part of this success has been the culture of high expectations from kaiako (teachers).

Thankfully, Te Kāpehu Whetū has gained approval to become a state school under Labour’s changes so they’ll be able to continue in their great mahi (work). But the school also stands to lose support staff and decision making power because of the change.

Once again, the future of Māori education is decided by non-Māori.

Are charter schools the silver bullet for Māori educational achievement?

I don’t think so. Underfunding of our education system as a whole probably has a lot more to do with it. Another approach would be to overhaul the curriculum, so te reo, tikanga, and Aotearoa’s history are incorporated as core subjects alongside English, science and math.

But it does seem to me that the principle behind kura hourua – allowing schools more decision making power over how they operate and use their funding, and for teacher qualifications to be decided by the local community instead of Wellington bureaucrats – is a form of rangatiratanga (sovereignty) in action. And that might provide for better outcomes for Māori.

Between 1996 and 2013, the proportion of the Māori population able to converse in te reo decreased from 25% percent to 21.3%. Kura hourua can offer a solution to this. The model enables people who have skills and knowledge in te ao Māori and te reo but don’t necessarily have teaching degrees to still impart their knowledge on our tamariki – something kura kaupapa does not currently allow.

From the outside, the charter school debate mostly seems like a partisan battle drawn across ideological lines. Which is a shame, because it’s our kids who have the most to lose when these politicians seek political wins.

The kōhanga reo movement was set back by ideology. Let’s not do the same again.