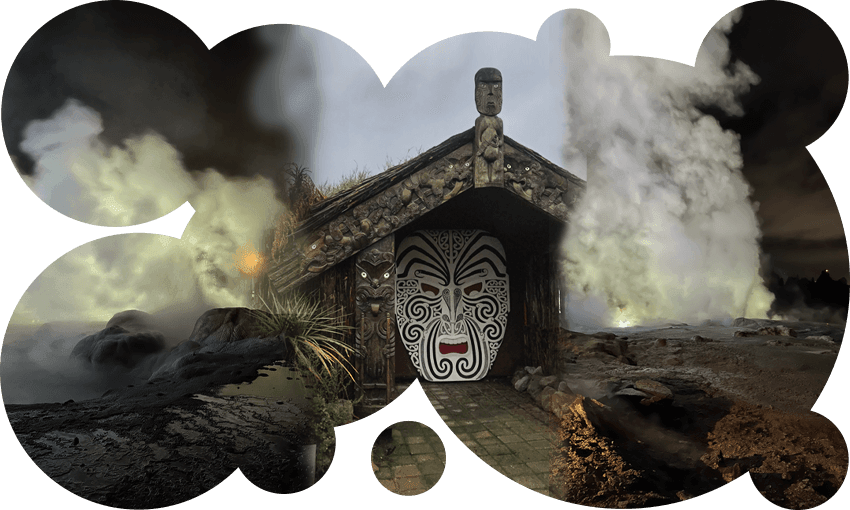 For local Māori, tourism has been seen as a commodification of culture, and conversely as a tool to maintain tikanga and mātauranga. (Image: Tina Tiller)

For local Māori, tourism has been seen as a commodification of culture, and conversely as a tool to maintain tikanga and mātauranga. (Image: Tina Tiller)

For more than a hundred years Rotorua has been a bustling tourist destination for visitors from near and far. Charlotte Muru-Lanning takes a look at how the industry has both shaped and been shaped by local Māori – and how they’re adapting for the future.

Shooting skyward through the gossamer of geothermal mist draping Rotorua, Waikite was once the pride of the city. The geyser’s 20 metre-high jets could be seen from the town centre, their waters spilling down the impressive sinter terraces that zig-zagged below.

These days, the landmark looks quite different. It’s 8pm and my flatmate Lucy and I are walking through Rotorua’s Te Puia, the precinct incorporating both Whakarewarewa Geothermal Valley and the New Zealand Māori Arts and Crafts Institute – set up by the government in 1963 to foster traditional arts at risk from the impacts of colonisation – with a small group of visiting Americans, Australians and Aucklanders for the Geyser by Night experience.

Lucy and I are very much indoor-people – neither of us would ordinarily choose to spend our holidays walking in the dark, let alone in the cold drizzle of midwinter. But tonight, guided by kaiārahi Patrick and Maunganui, we’re having the time of our lives eating kūmara and butterscotch steamed pudding cooked in Ngāraratuatara, a nearby thermal cooking pool, while listening intently to the legends and more recent histories of the bubbling pools and erupting geysers surrounding us.

Even in the dark it’s easy to see how Waikite has been transformed. The geyser no longer erupts with water and the cascading falls below are gone; a weak puff of steam is the only suggestion of its past strength. Its current state is a reflection of the complex relationship tourism has with the geography and people of Rotorua: often symbiotic, but in this particular case, perhaps more one-sided.

In the first half of the 20th century Rotorua households and hotels bored into the earth to tap the hot water below. Being able to easily and freely access an abundant energy source would have felt liberating at the time, but all those holes in the earth caused the water pressure to drop across the geothermal system.

Geysers began falling dormant throughout Rotorua; because of its high elevation, Waikete was the first to go in 1969. Now, after more than 50 years, there’s renewed hope for its future. Since the 1980s, geothermal resources have been more carefully managed and bores within close radius to the site have been stopped. More recently, there have been signs that water is returning. “I really do hope it comes back,” says Patrick, as we stand in front of the now moon-like terraces.

Before a tourist industry developed around Rotorua’s thermal attractions, they were an important resource for Te Arawa people. Hot pools were used to wash clothes, bathe in, and cook food. The warm surrounding areas were used for growing kūmara and collecting red kōkōwai for carvings.

Right next door to Te Puia is Whakarewarewa Village, a reminder of how the last two centuries of Te Arawa history have been defined by tourism. This is a place where the Te Arawa hapū Tūhourangi-Ngāti Wahiao have welcomed and guided visitors for more than 200 years. For local Māori, adapting to tourism has been seen as a commodification of culture, and conversely as shaping cultural identity and as a tool to maintain tikanga and mātauranga. Reflecting on those tensions in her 1981 thesis on the impact of tourism on Te Arawa, Ngahuia Te Awekotuku wrote: “There was indeed substance to my people’s loud and frequent claims that tourism has not hurt Te Arawa; in many instances it has helped us.”

The next morning we headed to Hell’s Gate, a geothermal reserve and mud spa in Tikitere, on Lake Rotorua’s eastern shore. The attraction, managed by Rotorua-based tourism conglomerate Wai Ora, is billed as Aotearoa’s first ever destination spa and is one of many Māori-owned and operated spots in the area. After a short wander around the various pools, fumaroles and lakes, we took what we felt was a well-deserved soak in the hot pools. As we sat overlooking the steaming geothermal park, smearing mineral-rich mud on ourselves, we both agreed that it was one of the most luxurious things either of us had ever done. Our only disappointment was that we couldn’t take any pictures of our most glamorous moment  – the sulphur in the air would apparently corrode our phones.

That evening we had a booking at Te Pā Tū Māori Village, formerly known as Tamaki Māori Village. In 2018 the village was bought from original owners Doug and Mike Tamaki by Tauhara North No.2 Trust, an ahu whenua land trust that redistributes profits to hapū members, often for education scholarships. Having learned from the website that it’s “a uniquely Māori celebration of culture and cuisine”, we were still unsure of what to expect when we were picked up from our hotel for the ride to the village.

On arrival, our group, almost entirely made up of overseas visitors, was welcomed as manuhiri through the gates of the village. This was the first weekend Te Pā Tū had opened this year and  there was an unmistakable buzz of excitement and relief in the air. As a city that relies heavily on tourism, Rotorua has been sharply impacted by the effects of the pandemic. Before Covid-19, an estimated 3.5 million people visited Rotorua each year; around 42% of those came from overseas.

Over the course of the evening we were guided through raranga traditions and rākau games and a brilliant kapa haka performance. At the end, we feasted. The intricate menu, designed by guest chef Christopher Stockdale (Ngāti Kahungunu ki Iwitea, Wairoa, Ngāi Tahu Matawhaiti), centred around produce sourced on and around Tauhara whenua and wines from Māori-owned wineries. Kai at these sorts of tourism destinations has traditionally been simple, usually hāngi served buffet style. The elevated dishes we enjoyed –  a boil-up amuse-bouche; individual eel, kamokamo, watercress and kumara bites; feijoa and mānuka honey infused vodka cocktails; and taro gratin – are a sign of how Rotorua is adapting to changing tastes, in both food and tourism.

Between bites, we chatted with Kiri Atkinson-Crean, head of tourism for Tauhara North No.2 Trust. Before Covid, the village brought in around 100,000 people a year.

The past two years have been the toughest in the 30-year history of Te Pā Tū, she explained, but the hiatus also created an opportunity to look inward and rethink the meaning of Māori tourism.

For Māori, cultural attractions based on our culture but designed to appeal to international tourist audiences can be an uneasy experience. Since the earliest days of tourism in Rotorua there has been a tension between cultural authenticity and the need to make money from that culture. The new programme at Te Pā Tū is an attempt to balance the need for visitors, and their expectations, with a changing Aotearoa where te reo, mātauranga Māori and decolonised history are becoming more mainstream. And it’s a representation of the ever-adapting traditions of Rotorua tourism – along with what we might be able to expect in the future.

Charlotte and Lucy were hosted by Tourism New Zealand.