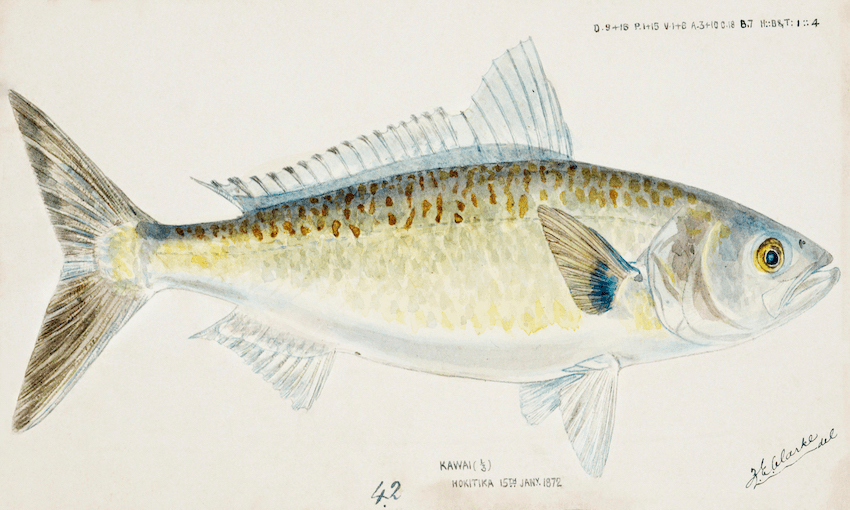 Kahawai start to gather at the river mouths in late December and run in January. Image: F.E. Clarke, 1872

Learning to live by the Maramataka: Kohitātea

Kahawai start to gather at the river mouths in late December and run in January. Image: F.E. Clarke, 1872

It’s Kohitātea, the eighth month of the Māori year – also known as Rehua, Kai-tātea and Hānuere – when the Rehua star outshines the night sky and fruits ripen for everyone to enjoy.

Learn more about the maramataka, the Māori lunar calendar, here.

The period of January was often referred to as the Rehua month. In te ao Māori it is common for a period or month to be represented by a star or cluster of stars. Our tūpuna would say that stars were the ariki (leader, head) of the month.

The star movement and other tohu show that we are moving from Matiti Kaiwai to Matiti Raurehu (fifth summer phase). Matiti Raurehu is often harder than the other phases to detect but you can recognise it by watching for a white dust-like substance on the lawn similar to frost.

A key purpose of the maramataka for our tūpuna was to regulate planting and harvesting, fishing and hunting. This period is great to observe the environment and notice tohu and how you feel at different times of the month.

Tohu o te rangi (signs in the sky): Rehua (Antares) is our dominant star. Rehua rises on the east and is due this month. If you’re in Auckland, Maraetai is a good place to see Rehua rise. In Hawaii they call Rehua ‘Lehua’. There are, unsurprisingly, similarities and connections between many Pacific islands and tohu in the maramataka.

Tohu o te whenua (signs on land): Summer fruits such as peaches and nectarine start to ripen. Our parents and grandparents would often get ready for the harvesting month and all the jams and preserves were prepared. The other tohu we see is Te waru i kataena e Rehua – the eighth month of the year when the ground laughs as a result of the Rehua star. This is when cracks start to appear in the ground.

Tohu o te moana (signs in the water): Kahawai start to gather at the river mouths in late December and run in January. The Oturu day is often the key day when the Kahawai run. Find the Oturu day in the maramataka dial and set your dial. If you live on the west coast, set your dial to Rakaunui the day before the full moon. If you live on the east coast, set you dial to Rakaunui the day of the full moon.

9, 10, 11 and 12 January – Tamatea a ngana, Tamatea a hotu, Tamatea a io and Tamatea kai ariki: The winds can be unpredictable especially near the water. The energy level is moderate so take it easy, no high activity.

19, 20 and 21 January – Oturu, Rakaunui and Rakau ma tohi: The highest energy days of the month and full moon. These are the hype days and it’s handy to add these dates to your calendar. You can train extra hard at the gym, maybe do a double session. If you’re in the office it’s more productive, you find your flow and people are extra positive and easy to work with. This is also the time to plant. We plant a lot of seedlings around the full moon and the garden thrives within 6-8 weeks from planting. This time is opposite to Whiro.

23 January – Oike: A low energy day. Time to relax, reflect and catch-up with whānau and friends.

27, 28 and 29 January – Tangaroa a mua, Tangaroa a roto and Tangaroa kiokio: These are good energy, fruitful days and ideal for fishing, eeling and white baiting (when in season). It’s also a time to weed the garden. Our tūpuna say this is the fruitful period and to make the most of it before the new moon and low energy days come around again.

Whiro, our lowest energy day, is due around 2 February. This will be added to the maramataka for Huitanguru next month. There are many stories from our tūpuna about the Whiro moon, not only it’s low energy but it’s position at sunrise and sunset indicating rain patterns for the month ahead. I will talk more about this next month.

Please note: This is intended as a guide to help you learn to read the tohu (signs) of the maramataka yourself. Tohu will change from area to area and therefore while the dates above might be accurate for the author but they may vary slightly for those in other rohe.

Click here to learn more about the days and how to use the maramataka dial below.