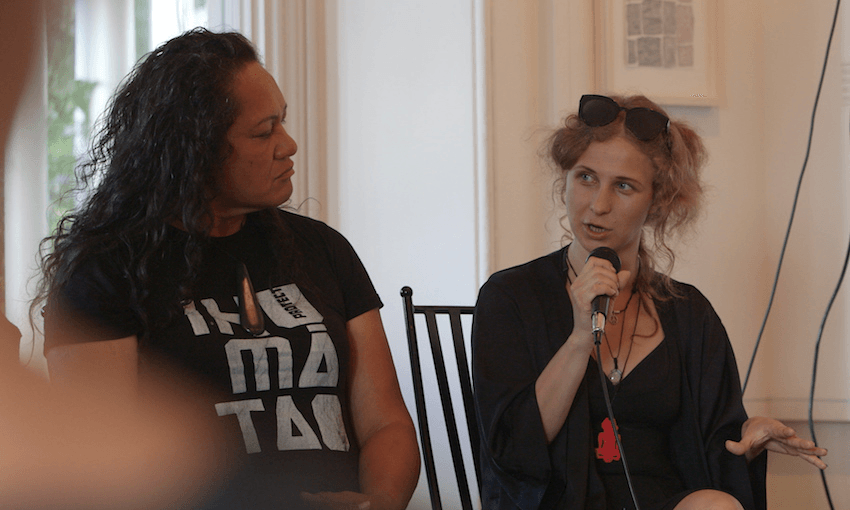 Pussy Riot’s Masha Alyokhina has been travelling from Auckland to Wellington overnight to join SOUL (Save Our Unique Landscape) in presenting a petition to MP Marama Davidson on the steps of parliament this morning. She speaks here about why she supports the campaign.

It’s a real honour that Pussy Riot can be a part of this campaign. Today we’re joining the hīkoi to parliament to call on the prime minister to give the whenua, the land Ihumātao, back to the Māori people. At midday, we’ll be on the steps of parliament to give the petition to the leader of the Green Party, Marama Davidson.

We’ve just been on the Bastion Point marae in Ōrākei where we spent half a day listening to the story of the tragedy of what happened to them. It affected me deeply. It’s very obvious that sometimes, Māori people’s rights aren’t being protected as they should be here. And also obvious in this case that this land shouldn’t be handed over to an already extremely rich company, Fletcher’s, with annual revenue of $9,471 million, to exploit such sacred earth.

It’s important to remember the history of this land, that it was illegally confiscated by the Crown in 1863 and was ‘granted’ to settlers, whose descendants farmed it until they sold to transnational corporation Fletchers in 2016 for  $20 million. Fletchers is now like the Crown in 1863, trying to sell it over the heads of the true Māori owners, and for double what they paid. That makes Fletchers part of the defrauding of Maori over this sacred whenua. And for what? Another fast-tracked housing development that is the equivalent of McDonald’s fast food. It will violate the soul of the land which Māori regard as both healing and also very important to their history and for their future generations.

We believe that this land belongs to all Māori as it’s the first land they settled on when they migrated from Hawaiiki to Aotearoa. This really is part of world history.

I know that the United Nations supports the idea that theNew Zealand government return this land to the iwi and I totally agree. It should be a World Heritage site. This is a place that can potentially be visited and known by millions of people around the world who are coming here as tourists.

For me personally, it’s really cool that I see here in New Zealand that people can make a difference and have influence, and change the path that politicians take. Because in my country, Russia, the situation is totally different.

You can look at my country as an example of what can happen if people lose all hope of directly talking with their politicians, or if you think of those places where politicians are thieves or killers. Here in New Zealand, if enough people speak up, the politicians must take notice.

So I hope there’ll be a lot of people today in front of the parliament steps with Te Ao Pritchard, the hīkoi organiser, and with Pania Newton and the other courageous members of the iwi who are stipulating that the only honourable path is for this land to be given back to them.

I hope that there’ll be a good result while I’m in New Zealand, a country I’m coming to love for its beauty and for the brave spirit of the people of the land, the tangata whenua.

I hope that the result of today will be that the whenua, this land Ihumātao, is given back.