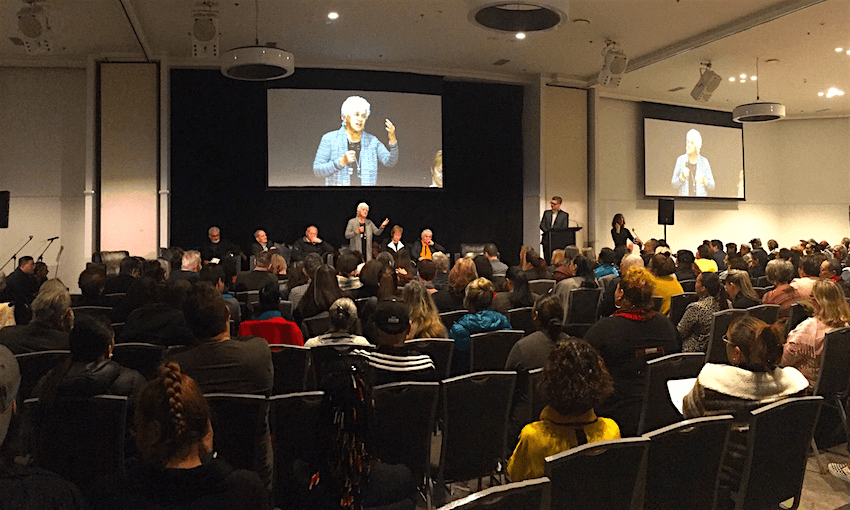 Dame Iritana Tāwhiwhirangi addresses a crowd of hundreds of whānau, practitioners, researchers and community leaders at the hui for a Māori inquiry into Oranga Tamariki. (Photo: Leonie Hayden)

The call from the hui was loud and clear: give us back our kids

Dame Iritana Tāwhiwhirangi addresses a crowd of hundreds of whānau, practitioners, researchers and community leaders at the hui for a Māori inquiry into Oranga Tamariki. (Photo: Leonie Hayden)

Whanaungatanga, whakapapa and whānau – the solutions that have always been with us, but largely ignored. Laura O’Connell-Rapira reflects on yesterday’s historic Oranga Tamariki hui

Prior to the arrival of European settlers, Māori society was governed by a system of principles, laws and customs known as tikanga Māori. The word ‘tikanga’ is derived from the word ‘tika’, which means ‘to be right, true or just’.

At its heart, tikanga Māori is about relationships. Justice Joe Williams describes this best: “The whole world, visible and invisible, was explained, rationalised, realised and rendered tangible by the concept of whanaungatanga.”

Another key concept in tikanga Māori is whakapapa. Whakapapa is the long and never-ending line of connection from the deities to earth to us. Whakapapa is the web that binds us together in relationships of care for each other and our planet.

These philosophies or laws reveal two things about Māori society prior to colonisation. First, as Māori health pioneer Mason Durie puts it, “that Māori saw themselves not only as masters of the environment but as members of it.” Second, and perhaps most significantly, that the Māori view of the world was, and is, based on relationships. Whakapapa and whanaungatanga help us make sense of the world, our place in it, and how we should relate to one another.

That’s why prisons and what politicians euphemistically describe as ‘uplifts’ would have been unimaginable in a society grounded in tikanga Māori. Locking up or removing people from their whānau, whenua and whakapapa would not have been seen as a solution to, or preventer of, harm. In te ao Māori, the solutions lie in enabling connection, cultural identity, collective accountability and care.

That doesn’t mean not intervening when there is a risk of harm, or avoiding holding someone to account when harm has been done. It means seeking to heal and remedy the drivers of harm, and/or to restore balance between those who have been harmed and those who did the harm.

It is that ability to practice our tikanga that many Māori are fighting to reclaim when we say #HandsOffOurTamariki.

Following the release of a heartbreaking Newsroom video that details staff from Oranga Tamariki attempting to take a child from their mother in a maternity ward, more and more Māori are calling for the government to give back our kids and devolve the resources and decision-making power required to care for them in a tikanga Māori way. It was, without doubt, the take-home message from yesterday’s Whānau Ora hui to launch the Māori inquiry into Oranga Tamariki.

It is also the message in an open letter initiated by prominent wāhine Māori lawyers, midwives, researchers and social workers, 17,000 people (and counting) that demands that:

The open letter will be delivered to parliament at a rally on Tuesday 30 July. My hope is that it is accepted with open arms and an open heart. It is long past time for the New Zealand government to devolve the power and resources of social welfare to iwi, hapū and Māori. Something that has been called for by Māori since Pūao-Te-Ata-Tū was released in 1988 – a report that investigated racism in the then Department of Social Welfare’s practises, which was widely referenced at yesterday’s hui.

Let’s be clear: Māori society was not always perfect. No society or cluster of humans ever is. But if we compare the oft-cited deficit statistics on Māori today with observations made by early missionaries to this land and our own oral traditions, we see that pre-colonial Māori society contained very little to no violence towards children.

“They are kind and hospitable to strangers, and are excessively fond of their children.”
– Augustus Earle (1832)

Prior to colonisation, a range of rituals and ceremonies marked the birth of a child. Children were (and are) considered sacred. As the crowd was reminded by Dame Rangimarie Naida Glavish yesterday, the word tamariki can be broken into two parts: tama is derived from Tama-te-rā: the central sun, the divine spark while ariki refers to a chiefly status.

It once was common for generations of family members to compose special waiata oriori to sing to their babies to reinforce whakapapa, whanaungatanga and whānau. The whole whānau had a role to play in the upbringing of tamariki, and children were given opportunities to participate in public life. Children were often adopted by other family members in what is known as whāngai. Children were cherished by their entire hapū because they would be the tribe’s future.

It is likely that this sharing of parenting also reduced stress – which we know alongside institutional racism, intergenerational poverty and trauma, and forced removal from culture and place – can push people towards violence.

Pre-colonial Aotearoa might sound very romantic, but as Kassie Hartendorp, a community organiser at ActionStation, has said, “Romanticising [is] strategic resistance in a world that has tried to devalue, strip and erase our traditions. I will never apologise for romanticising indigenous pasts in a world that would rather we never remembered at all.”

And remember we must.

As Dame Tariana Turia said in her 2017 speech “The future is behind us”: “In te ao Māori we might characterise the notion of oranga tamariki as being the expression of te ihi, te wehi, te mana, te tapu. That is – the wonder, the awe-inspiring power, the charisma, the sacred seed that is captured in every new born baby.”

In response to the state of emergency we find ourselves in today, she added yesterday: “We are at war. In a war you either fight or you lay down and die. We will never die.”

Now is the time for Oranga Tamariki to give iwi, hapū and Māori the resources and power we need to bring this vision to life.