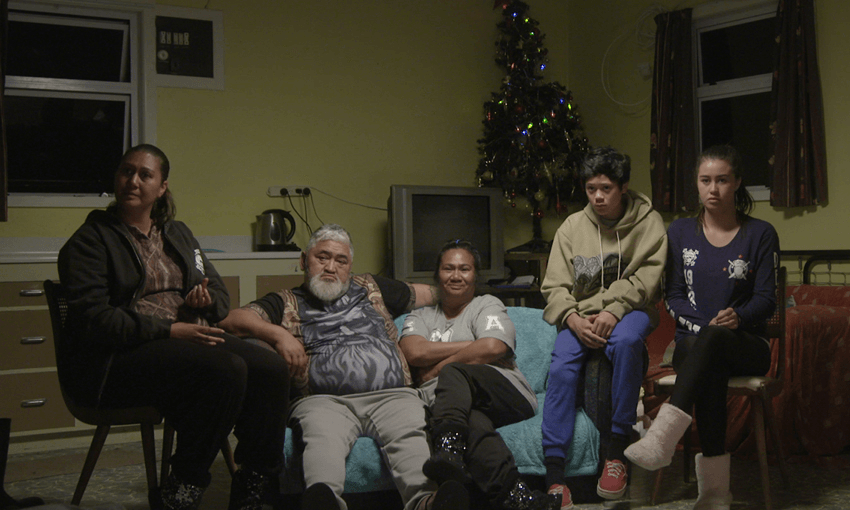 “Some say, ‘Where are you gonna bury yours? Inside or outside the urupā?’”

Suicide is a topic many Kiwis shy away from but the reality is, every three days a young New Zealander takes their own life.

A new film by Māori psychologist and filmmaker Paora Joseph (Te Āti Haunui a Pāpārangi) invites open discussion of the topic through the brave testimony of five grieving families travelling to Cape Reinga.

The movie follows Paora as he travels with the whānau, by bus, to marae in Taranaki, Whanganui, Rotorua and on to Northland. Taking the memories and wairua of their loved ones to Te Rerenga Wairua, the departing place of souls, the journey takes the shape of a hook around the North Island.

Shot as a documentary the film also incorporates dramatisations, creatively blending the documentary strand with the fictional story of Tama (played by Niwa Whatuira), a young man undergoing a struggle with life.

“I think it could be challenging for some people who are used to having straight documentaries,” shares Paora, of the film’s defiance to the standard genre. “The dramatic element is there to draw a young audience to watch the film, because we have the highest youth suicide rates.”

Currently, New Zealand tops all OECD countries in the suicide rate for 15 to 19 year olds. We also have the second highest suicide rate in the developed world.

The problem is only getting worse with 606 Kiwis dying from suicide last year, 27 more than in 2016.

I know these statistics all too well and, was initially conflicted to watch Maui’s Hook, given the topic. You see, my father took his own life 14 years ago. It was a very painful experience that still affects my whānau and I, today.

At the screening, I quietly entered the movie theatre, my emotions guarded. I questioned why this movie was being made.

It was only when the Albert whānau came on screen that I allowed myself to connect with the heartache. Being able to relate to these families broke through my facade, and the movie had its full effect on me.

In the film, Thelma Lovan of the Albert whānau shared the honest and raw mamae of losing her younger brother, Adrian Albert, in 2015. He was only 25 and left behind three children.

“When my brother died, I had to accept that straight away,” she said. “I couldn’t tell myself lies. He took his life. He killed himself. And he left us here with a mess. And in this mess, we don’t talk about it. How can I help my family if we can’t talk about it?”

This statement was so close to home and was the arrow that pierced straight through my heart. It was one of numerous moments throughout the film where I could no longer hold back tears.

How does anyone talk with their whānau about suicide? Fourteen years later, my whānau and I are still trying to figure this out.

“Māori families feel ashamed [of suicide],” says Sam. “You know, a lot of people carry that shame with them instead of talking and saying ‘my whānau member took their life’. I couldn’t feel ashamed of my son because he was my son.

“You love your children no matter what decisions they make, or how stupid they are.”

It was because the Albert whānau had no shame about the loss of Adrian that they were able to speak up and share their story. But, they say, it is important to be aware of sharing this kind of kōrero in a safe environment.

“You don’t know how certain whānau members are going to react around our kōrero. Some say, ‘Where are you gonna bury yours? Inside or outside the urupā?’” shares Gina. “Even though we are around our own whānau every day, the safety barrier is not always there.”

Spending time with other families who had gone through a similar journey, and sharing the mamae, was the draw card for the Albert whānau to be part Maui’s Hook.

“Being around other like-minded families, I felt I could open up more and make myself stronger,” shares Gina.

Sam adds: “Yeah, that’s what it was for me, a healing process.”

Paora Joseph’s psychology experience has seen him work with at-risk youth in South Auckland and Taranaki. As the film’s director, he draws on this and appears in the documentary conducting healing sessions with grieving families and, acting as a mentor to the character Tama, in the dramatised threads.

He says the issue for New Zealanders in knowing how to deal with the loss of someone to suicide, is that most struggle with a poverty of consciousness and a poverty of spirit.

“We are often afraid to talk about things or, we keep things to ourselves. We’ve inherited it. It’s a part of our culture. I think it’s probably something that’s more a part of an English culture. You know, that pioneering culture. That stiff upper-lip, ‘she’ll be right mate’, we’ll take care of it ourselves, culture.”

He encourages families to share their thoughts and feelings about the loss of their loved one, to share the weight of the mamae. Adding the great thing about Māori culture, is the concept of whanaungatanga.

In the ’90s, Paora completed a university thesis titled Māori Youth Suicide in Aotearoa. He focused on the common themes around how and why Māori youth took their lives in pre-colonisation, compared to modern day.

“One reason was the unrequited love affairs that people suffered from,” he says. “Youth especially. Because once you fall in love, your first love, you think it should last forever. But that’s not often the case.”

Other common themes included revenge, guilt and shame. And he believes in modern society, there are a lot more factors involved.

“[Suicide] happened in pre-colonisation but not as commonly as now,” he adds. “Our emotional capacity is less, I think, than what it used to be.”

There are also many external factors distracting people from living well.

“The whānau unit isn’t as strong. There’s alcohol and drugs. There’s abuse. A lot more kind of emotional, physical and sexual abuse. There’s the identity crisis we have as youth, but also as Māori. There’s identity challenges around sexuality.

“It is really important to be able to express ourselves and not feel that we’re going to be judged for it.”

He goes on to say having a safe space with whānau or friends who will listen and support, is key for anyone dealing with suicidal thoughts.

For those of us who have lost loved ones, the only way to move forward, is to forgive.

As Gina Albert says: “I know my son is sorry for what he has done. Even though he’s there and I’m here, I know he regrets what he has done. The biggest word for me now is forgiveness. Without that we would not survive.”

I, too have forgiven my father for leaving us the way he did.

And, after watching Maui’s Hook, I have spoken with my whānau and we have all agreed to go on a hīkoi together, to korero and address the loss of dad so that we can finally start healing as a whānau and move forward together.