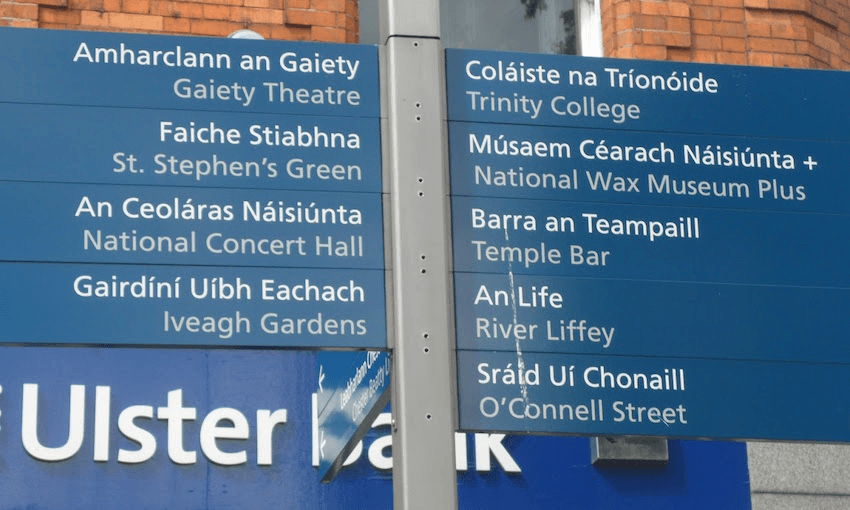 Road and street signs throughout Ireland are written first in Irish (Gaeilge) and immediately below in English.

How the Irish have embraced compulsory language learning

Road and street signs throughout Ireland are written first in Irish (Gaeilge) and immediately below in English.

The debate continues on whether compulsory schooling could be effective as a te reo Māori revitalisation tool. Kristin Hall reports on the view from Ireland.

‘Mattresses have three suites. Macdara has four more flavours. How many mills are Macdara?’

This is a question I found myself pondering for far too long while sitting in a suburban kitchen trying to help a seven-year-old with his homework. It was a problem I had to solve, but the real problem was that the problem was in Irish, which the seven-year-old knew far more of than I did, but not enough to be able to explain that I’d translated the problem wrong and if I’d translated it correctly it would have been a simple question of what is four minus one.

It was a truly terrible idea on my part to take a job as a nanny in an Irish speaking family, but as with many a bad decision in my life, it was a case of curiosity killing the cat. I now know what the word for cat is in Irish (helpfully, it’s cat), but I don’t know what it is in Māori, or at least I didn’t until I Googled it just now, which is what this piece is really about.

Our government wants to see one million Kiwis speaking te reo Māori by 2040. It’s an admirable goal, and long overdue given that everyone would still be speaking it if it wasn’t for a gang of jodhpur-wearing whiteys with guns.

But how do you re-invigorate a language? How do you convince a generation of youths that the ancient idiom of their country is just as important as being able to communicate in a sequence of tiny pictures of eggplants?

Compared with New Zealand statistics, the latest available census (carried out in 2003) suggests there were approximately 125,000 speakers of te reo Māori at that time. Of those, it’s believed there are 50,000 Māori adults who can speak Māori well or very well.

Proficient or not, you’ve got to admit there’s a yawning gap between speakers of Irish and speakers of Māori. You might think that a ridiculous comparison, but these two languages, often the subject of patronising ‘dying language’-themed diatribes by various non-experts have a bit more in common than you might think.

Ireland’s population is currently sitting at 4.8 million, a leprechaun’s hair ahead of New Zealand at 4.75 million. Both countries have native languages that were near-destroyed by colonisation, but are both currently experiencing a bit of a renaissance in their home countries.

So why is it that in Ireland you can turn on the radio and hear bits of Irish spoken on every station, even the ones that play DJ Khaled? Why is it that there are more people learning Irish on Duolingo alone than there are native Irish speakers?

The answer is: school.

Learning Irish is compulsory for all Irish students (with a few small exceptions) from the start of primary school at age six right through to the end of high school.

There’s been huge debate about whether that should remain the case, and the quality of the Irish being taught – but the reality is that young people in Ireland know more of their native language than young New Zealanders do, and that’s got to count for something. I spoke to a couple of my youthful Irish friends about what New Zealand could learn if we were to embrace Māori in our school system:

“I think I’ve benefited from learning Irish at school because almost everyone has some sort of conversational Irish. I makes me feel more connected to my culture because I can understand the national anthem. I think if Māori was going to be taught in schools in New Zealand and if the curriculum was based more on speaking the language and less on old poems and stories, it would be better than our curriculum.” – Luke Walsh, 19, speaks basic Irish

“I have  to say my love for Irish was probably incited in school because it was the first time I encountered the language. Languages are best learned at a young age and I feel the school system allowed me to pick up the fundamentals of the language from the age of four, which benefited me greatly. I believe Irish is the window to understanding the culture of our ancestors…. at the end of the day, a language cannot thrive unless it is spoken.” – Rosa Finn, 20, speaks fluent Irish and is studying Irish at university.

The prospect of Māori as a compulsory subject is debated in the media every Wiki o te Reo Māori. One common point of contention is that you can’t force a language on a child because they may end up resenting it. This is a perfectly convenient argument until you consider the fact that if every child had absolute free will at school the majority of the student body would be leaving seventh form with NCEA Excellence in making bongs out of Granny Smiths and drawing 100,000 tiny cocks on a piece of A4 refill.

Still mad about the idea? Just like those core subjects, Māori could be kept compulsory until fifth form, after which the leaders of the future could drop it like a hot kūmara if they really felt the need.

There is a famous Irish saying – ‘Is fearr Gailge bhriste, ná Béarla cliste’, which, roughly translated, means that it’s better to speak broken Irish than it is to speak clever English. While it’s probably a bit late for us to give up on the English altogether, perhaps the New Zealand applicable version could be that it’s better to speak imperfect te reo than it is to only know kia ora, ka pai, and the words to ‘Oma Rāpeti’.

There may not be a million speakers of te reo in New Zealand by 2040, but one things for sure, there’ll be more than we have currently if we start treating our national languages equally. Everyone has to start somewhere.