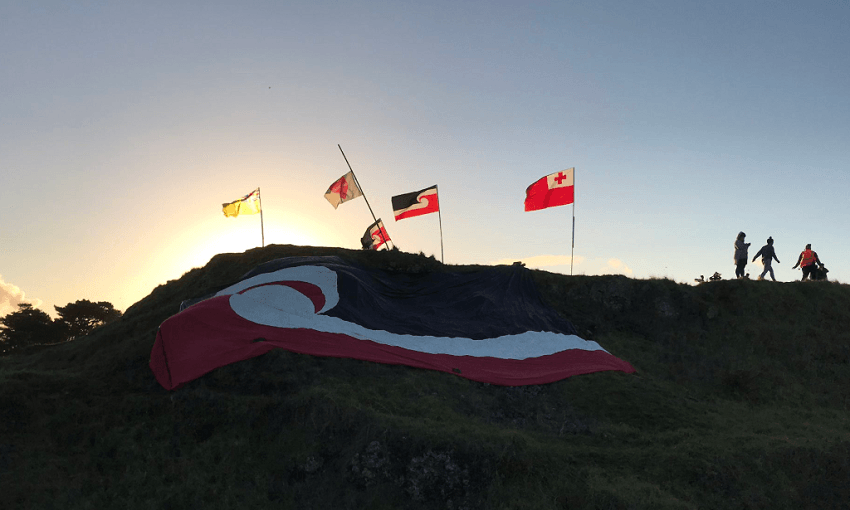 Mana whenua have agreed to keeping the land at Ihumātao. So what comes next?

After over a month of discussions, Kiingitanga has announced that mana whenua at Ihumātao want to keep the land. Fletcher Buildings still owns it, so what comes next in the movement to protect Ihumātao?

After over a month of discussion between divided mana whenua over the land at Ihumātao, the Māori king, Kiingi Tūheitia has announced a decision has been made: the people of the land want it back.

On April 3, Kiingi Tūheitia Pootatau Te Wherowhero VII visited the south Auckland land protector movement that had gathered at Ihumātao, Mangere to fight against a 480-house development on historic whenua. He invited protectors and other mana whenua to a meeting, without government involvement, to talk through the divide that had appeared between the SOUL movement and the mana whenua who had seemingly sided with Fletcher.

As a result of these discussions, mana whenua have agreed they want the land back, and to decide collectively how best to use it. A spokesperson for the Kiingitanga says the discussion was crucial to enable both sides to speak on their concerns and come up with a mutual agreement.

“Mana whenua agreed the return of the land is outside of the Treaty of Waitangi settlement process and therefore requires an innovative and modern solution that does not financially disadvantage iwi,” the spokesperson said.

Qiane Matata-Sipu, one of the founding members of SOUL, said that while she’s happy with the outcome for now, the fight’s not over.

“Our whanau of Ihumātao, Makaurau Marae and SOUL have said for the last five years that we want the development stopped and the whenua returned, so the outcome is great for us. It shows that we’re now all on the same page and that being supported by the kiingitanga movement and the king is a very powerful place to be.

“The reclamation continues. Even though we’ve come to a consensus, the whenua is not safe. The whenua is still owned by Fletcher… It’s now time for the government and Fletcher to work on how the land is going to be returned because that’s the expectation.”

Prime minister Jacinda Ardern paused construction on the site in late July after tensions between Fetcher, land protectors and police escalated. She said she was likely to visit the site, but didn’t want to intervene while discussions led by the Kiingitanga were underway.

“It is important that the government prevents any further alienation of the people from their land,” a statement from the Kiingitanga read.

Deputy prime minister Winston Peters today thanked Kiingi Tūheitia in a statement, saying the government would be happy to “join discussions on the future of the land at Ihumātao”.

“As we go through the process we are mindful of heritage claims, precedent issues and the commercial interests in the site. We look forward to discussions that involve all parties to find a resolution to these matters.”

For Matata-Sipu and the land protectors who have occupied Ihumātao for over three years, the kaupapa hasn’t changed. They’re staying on the land for as long as it takes to get it back.

Matata-Sipu hasn’t yet heard anything from the government about the Kiingitanga’s statement. Over the past three years, SOUL has presented the government with many options to give the land back to mana whenua, and she said she hopes they’ve been listening.

“The government has had five years to prepare for this… the National government were well aware of this issue and so were the Labour party, before they got into government. They have been given a number of creative solutions by us over the years and so they need to start looking into those more deeply and having conversations with Fletchers and they need to start making some very bold moves.”

And if Nazi-slogan-slinging mayoral candidates weren’t enough to worry about, Matata-Sipu said Auckland Council has a role to play in the negotiations, too.

“The Auckland Council have already, technically put a deposit on the land. They’ve purchased two parks within the development, so there’s already a deposit that’s been paid out on the whenua.”

The fight for Ihumātao is ongoing, but the agreement that’s now been made between mana whenua groups has progressed the fight and Matata-Sipu said she hopes it’s sent a clear message, not just to the people at the top, but to Māori around Aotearoa.

“Two of the principles of the Kiingitanga are mana motuhake and tiaki whenua, which are protecting and preserving land, and self-determination. To have the Kiingitanga take a stand is quite powerful, and when the king movement was established all those years ago, those were the principles it was founded on. It’s powerful for Māori and it’s positive for Māori.”