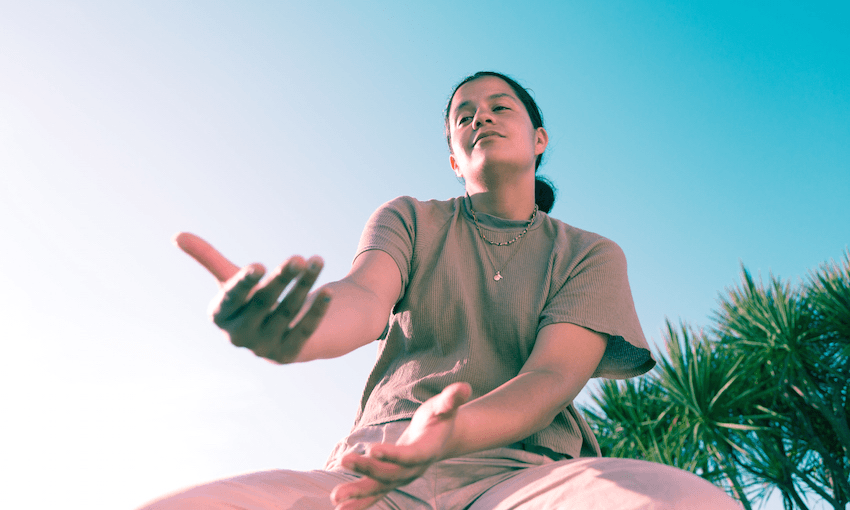 Intention and joy: The Breaker-Upperers’ Ana Scotney on her new play

Breakout performer of a hit local film and now award-winning theatre maker, Ana Scotney is the definition of a rising star. She talks to Sam Brooks about her upcoming show The Contours of Heaven.

If you’re most people, the first time you saw Ana Scotney (Ngāti Tāwhaki) was in The Breaker-Upperers, in which she plays the take-no-shit ex-girlfriend of James Rolleston’s Jordan. From the moment she arrives on screen, she breaks the laid-back and aggressively quirky film over her knee. You don’t just want to look at her, you need to look at her. She moves and talks in a way that is unashamedly theatrical yet so grounded she’s basically buried neck-deep. It’s no surprise that she’s been hailed as the breakout star of the film.

But the first time I saw Ana Scotney was in Auckland Theatre Company’s Peer Gynt [recycled], a scattered confetti adaptation of the rightfully-underperfomed Ibsen show. In the dozen-strong cast, Scotney stood out, claiming her space on that cavernous stage, reclaiming her time and voice in a way that felt electric and necessary. With some performers, there can be a cumbersome weight to demanding attention rather than earning it. Scotney doesn’t have that problem.

That lightness extends to her solo show Contours of Heaven, which returns to The Basement Theatre this week after winning four awards in the Auckland Fringe Festival (including Best Theatre and Best Performer for Scotney). Contours of Heaven is a verbatim show that tells the real stories of six young people from Te Matau a Māui in the Hawke’s Bay, and combines live vocal harmonies and physical theatre to explore these people’s loves, losses, hopes and fears. It couldn’t be any further from The Breaker-Upperers.

I got the chance to talk to Ana about both projects, including the genesis of Contours and how she holds both kinds of work in her practice.

So how did you start to make Contours of Heaven?

It started with Puti [Lancaster] and I. Puti was the instigator of the idea and the vision, which is really cool for a solo [show] because often with other solos I’ve made, I’ve not just been the person who has held the creative vision or concept, but I’ve also needed to hold the execution of it, the performing of it.

This was born from my friend Marama Beamish, who co-created the show, and Puti and I all going through Toi Whakaari together. Marama was between Puti and myself and she said to both of us separately: “I think that we all have to come together and make a piece of work”, and I’m obsessed with Marama, she is so cool.

From there, Puti proposed this idea of making a show specifically for the context of the Hawke’s Bay Arts Festival that focused on the stories of rangatahi and young people in the Hawke’s Bay.

It was important that Puti already had a relationship with the people that we spoke to so that it wouldn’t feel as though this was being instigated or plucked from nowhere. Because the starting point was a relationship, it meant that we didn’t necessarily have to come in with an agenda of extracting a specific story.

Initially, we had like 10 responses [and then] for various reasons all 10 weren’t able to speak to us, so we had six conversations and that felt like something that was tangible to hold. It was enough variation and diversity of experience, and different relationships to the geography to cover that scope.

Where did you go from that point? You must have had so much stuff. How did you turn it into an actual show?

It was so hearty! Firstly we did it really slowly. I moved to the Hawke’s Bay – went full immersion. Because my knowledge of what was going down the Hawke’s Bay was non-existent so I moved there for three months.

Puti and I were talking about it afterwards and I think that we both had naivety around the hugeness of that ask, of trying to make a piece of work that was socially reflective, without being earnest, but still telling these stories with aroha and also in an original way or artful way, rather than just being straight up the gun, fuck it, here’s the hard-hitting thing.

That’s not my style. That’s not Puti’s style. So yeah, three months deep with that and then it all came together. We had a little show.

What were the differences between performing it in the context of the Hawke’s Bay Arts Festival and then bringing it to Auckland Fringe? How were the responses?

I think that what’s been really interesting in terms of the responses, is in the Hawke’s Bay there was the locality of it – people were responding because they had direct experiences or relationships to these people. The rangatahi themselves came and saw it. They saw the stories inside the play, inside The Contours of Heaven, and then the stories of the audience who are actually from there and understand everything that gets referenced in the play.

But in Auckland, people were relating to it, but from afar I guess. So going, ‘Regardless of it being from regional New Zealand we still have [similar] experiences’, because the points are all fundamentally around family, friends, school.

Do you feel a weight or obligation to do this kind of work?

Yeah I feel there’s definitely an element of taking it seriously, because it’s not just me mincing around, being out there for me. As a performer, I nerd out over having the opportunity to play an actual person, but I do feel that this work calls to arms everything I have as a performer and as a young Kiwi gal, you know? It makes me emotional but it’s good.

And then to shift to almost the opposite kind of project, we’ve got The Breaker-Upperers – which you really steal the show in. What was that whole experience like for you?

It was really, really fun. It was awesome and I feel like the two projects were going along in tandem with one another – it’s sort of like the two sides of the girl. I feel like there’s one side of my practice in this really stunning world of the film and then another part in this stunning world of Contours of Heaven. But I mean Maddy [Madeleine Sami] and Jackie [van Beek] are the bomb, and I’ll always endow those two with like little kernels of fangirl glitter forever, y’know?

But it’s been really cool and I’m really stoked for them that the performance has been as well received as it has, because they’re iconic as a duo and I love them.

I feel like within the world of each project I just go hundies on each one! It all comes from the same aroha, and I just try to mince into everything with cheerfulness. I’ve been really lucky because I adore both projects, so it makes it really easy for me to feel supported to be able to have my own ideas, perspectives and inputs. That’s really massive for me, to be in coalition with whomever I’m working with, so it’s not just me arriving with the expectation of just delivering a performance.

I’m a massive stickler for intention. If I can feel what it is then I know what I can bring, if I feel the intention with the mahi, and I can work with it and jam a creative vision, then I can summon whatever particular thing it needs and put that to it. But if I can’t feel what someone’s intention is, I’m like ‘Soz shorty.’

So yeah, I hold it with intention and joy.