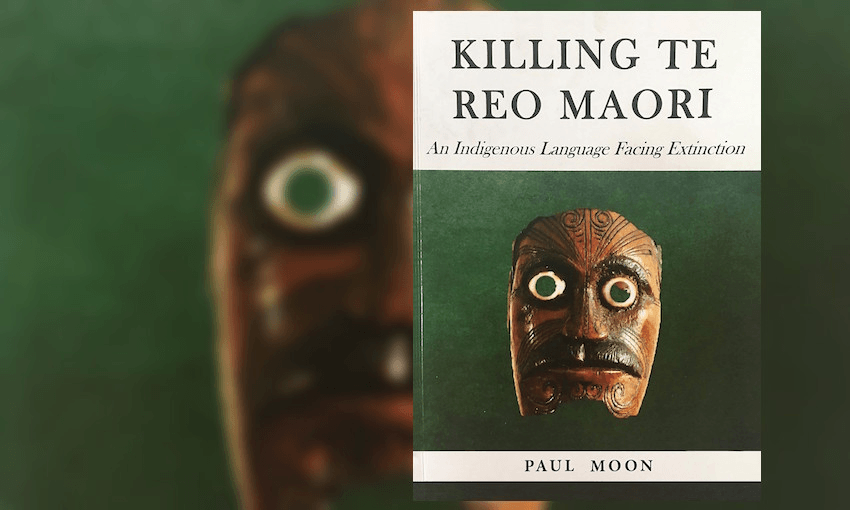 Click here to read this review in te reo Māori

I immediately notice the macron is missing over the ‘a’ in Māori.

I’m intrigued by the choice of imagery for the front cover of Professor Paul Moon’s latest book. It features an ancient-looking carved face with a moko and a moustache, its deep green backdrop appearing through his gouged out eyes. I can’t find the significance of this image and there is no information provided about the source.

Killing Te Reo Maori may be considered a follow-on from his last book, Ka Ngaro Te Reo: Māori Language Under Siege in the Nineteenth Century (2016), which provides an informative historical account of the language from 1800 – 1899, an area in the history of te reo Māori that hasn’t been researched extensively. But to be clear, Paul Moon is a historian. He is not a linguist, a learner, a speaker or a teacher of the Māori language and due to his lack of involvement in te reo Māori endeavors both in and outside of our faculty, I doubt he would class himself as a revivalist of the language, so I was intrigued to read his commentary on the forlorn state of te reo Māori.

The book is broken into four chapters: The Present Condition of Te Reo Māori, Te Reo Māori Status Issues, The Jubilant Monster (that is, the language of the conqueror) and The ‘Sovietisation’ of Te Reo Māori, which speaks about the Māori language ‘market’. I found parts of this book interesting, although his examination of challenges facing te reo Māori are nothing new to the field of research.

I grew weary of the continuous reminder of the ‘dire state’ of the language via gloomy analogies. He describes te reo Māori as a “dying patient on life-support” and describes the idea of making the language compulsory as a means to merely “stop the bleeding”. He speaks of the decline in speakers as a ‘spreading rot’ and the Kōhanga Reo as a “foundering ship”. However, the nadir in this collection of analogies is his reference to the Māori language community, the revivalists of the language, as ‘cockroaches’:

“…if Te Reo Māori was to cease being a living language, it is possible to envisage language revivalists still scurrying around, committed to their research and schemes – like the apocryphal cockroaches surviving a nuclear war and clambering over the rubble of their annihilated world.”

I understand that scrutiny of policy, research initiatives and “entrenched ideas on how to revive the language” are required in academia but an attack of this nature on the community is insulting and offensive. Perhaps what Moon fails to realise is that te reo Māori revivalists do not exist within academia alone. Language revitalisation is centered in community, not academia. The “revivalists” are the parents and grandparents, the teachers and mentors; they are the people who learn, speak and teach the language day in, day out.

In relation to the traits and features of the language located in the first and second chapters, I was astounded that someone with so little knowledge of, or involvement in te reo Māori would have the audacity to scrutinise at length exactly who is fluent. He talks about the common errors in assessing the fluency of a person in the language and the role of second language learners and their inability to acquire a native speaker’s accent.

He then moves onto the area that has stirred up the most attention in the media – his claim that stress on correct pronunciation is deterring people from learning the language and is detrimental to its progression.

In the sub-chapter ‘Correct’ Pronunciation, Moon asserts that each language has pronunciation varieties and therefore questions if there is in fact a correct way to pronounce the Māori language. Even when taking into consideration dialectal differences in te reo Māori, which effects the prosody of an individual’s language, there is no evident variance in the pronunciation of words. As a speaker, a teacher and an engaged member of the Māori language community, I can confirm that there is indeed a correct way to pronounce the Māori language. In my experience, te reo Māori “purists” are more concerned with the effort made to pronounce people’s names and place names. That is where the stress on correct pronunciation usually lies, affording people the dignity of hearing their names pronounced correctly.

In chapter two, Moon labels efforts to encourage people to speak te reo Māori as propaganda made up of “unsubstantiated claims, impoverished logic, and forlorn myth-making.” He claims that the sacred, treasured status placed on the Māori language carries a cultural obligation that, for some, is too heavy a burden to carry, consequently leading to fewer people committing to learn the language. A part of this so called “propaganda” (which is defined as information, especially of a misleading nature), are campaigns and quotes referring to te reo Māori as a “beautiful language”. He says such rhetoric is “superficial, ineffective and ignorant” and subjective to evaluation. I find his comments on this issue quite captious, very selective and out of touch with the community who have experienced the difficulties and joys of a Māori language learning journey.

In summary, this book claims that every single initiative to revive the language up until this moment is in fact killing the language – an utterly ridiculous assertion. If it weren’t for the initiatives set in place over the last four and a half decades te reo Māori would almost certainly be dead by now. The book provides more questions than answers in terms of what measures need to be taken to ensure the language is kept in a safe space. But Moon’s ‘answers’ would be like an unqualified doctor prescribing a patient medication for an ailment he has no experience of. The one solution Moon does suggest is that that there needs to be radical adjustments to the demand for the language to be spoken, mirroring the demand for English to be spoken throughout the world. In Aotearoa our non-dominant language, te reo Māori, has traditionally been ignored leading to gross disparity. Much more needs to be taken into consideration – and is being done – than focusing solely on creating more demand for the language to be spoken.

This book has provoked conversation and debate. The Māori language community have taken to social media using the hashtag #goodreostories to share their own positive experiences learning te reo Māori. Statistics inform us that te reo Māori remains in a vulnerable state, but I can’t help feeling optimistic about the future of the language. Now, more than ever, te reo Māori is receiving increasing national attention. Its increased use in mainstream media and in the wider community has sparked awareness; in my own work I have seen an influx of people from a wide range of ethnic backgrounds coming to learn te reo Māori for various reasons. Like many others I know that te reo Māori will continue to grow and prosper into the future. Te reo Māori professor Jeanette King quotes the American academic Leanne Hinton in an excellent Twitter thread about the book:

“Language revitalisation and its successes are individualistic, varied, evolving and often small, yet leading toward growth. Success is not an endpoint but a process.”