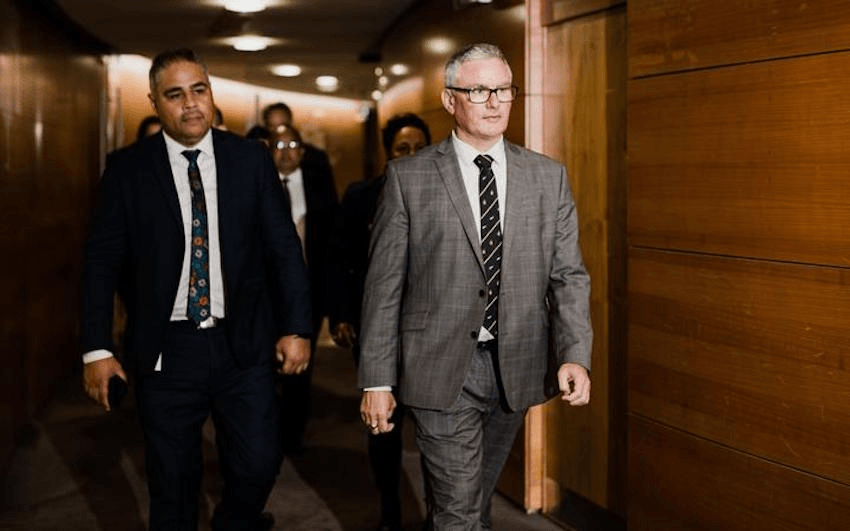 A handful of Labour’s Māori MPs are hitting centres around Aotearoa to talk through the budget and its $1.1 billion in targeted Māori funding.

Today saw a tour of duty in Auckland for three of Labour’s Māori caucus, in an effort to connect with Māori organisations on the ground following last week’s budget.

It’s an effective tool he uses often to establish a “we’re the government but we’re just like you” rapport with a crowd, but today, to a group that included a who’s who of NGO and kaupapa Māori leaders from Tāmaki Makaurau and Northland, it was coupled with a message about who they were there to serve.

“Just about everyone here is tied to a Māori organisation or speaks Māori or our kids go to kura or kōhanga,” he said. “We’re less than 10% of Māori. Most of our people don’t know what TPK [Te Puni Kōkiri] is. But what we have learned is that by Māori, for Māori solutions can do the business for our people.”

Jackson then handed over to Peeni Henare, who teased that there will be an announcement tomorrow to name the steering committee, led by Tā Mason Durie, to start building the Māori health authority announced in April.

Durie, who was knighted in 2020 for his services to Māori health, was professor and head of Te Pūtahi-ā-Toi, School of Māori Studies at Massey University and remains the university’s emeritus professor of Māori research and development.

Henare said consultation hui for the health reforms will continue for another six weeks.

Reiterating health minister Andrew Little’s deadline of July 1, 2022, for “lights on at the Māori Health Authority”, Henare told the group: “The expectation is that the legislation for the health reform, which includes the Māori health authority, will hit the floor of parliament about August”, adding that they expect it to have passed by March.

On housing, Henare spoke about the $380 million for new housing initiatives and $350 million to “unlock” the infrastructure to help grow more housing.

“Infrastructure isn’t just roads and pipes,” he said. “For places like Hokianga, that means water tanks, sewerage systems for papakāinga and marae, and solar energy.” A question from the floor raised whether Māori business and tradespeople had been factored into building housing and infrastructure. Henare replied they hadn’t but referred to Labour’s apprenticeship and trades training programme, saying that the first wave will be entering the workforce soon.

Next up, Kelvin Davis asked the group to cast their minds back to the fiscal envelope ­– the government’s 1994 proposal of a limit of $1 billion to settle every Treaty claim in Aotearoa – and then to think about the $1.1 billion in targeted Māori funding announced in the most recent budget.

He went on to address his roles as minister for corrections and for children, both of which he has come under intense scrutiny and criticism for. “The biggest change is that Oranga Tamariki need to devolve the decision making and the resources to Māori and communities. There’s $23 million to implement those changes.” He referenced Ricky Houghton, whose Korowai Trust offers emergency housing, services and support in Kaitaia. “We need to work out how Kaitaia is going to make the decisions and find the resources up there, and also in Invercargill and Gisborne, whose needs will all be different.”

He then spoke about reduction of the prison population, and initiatives like the newly launched Wāhine Māori Pathways. He said there were 10,820 people in the New Zealand prison system at its population peak in March 2018, adding that the government has improved the system “without changing any laws”. As of yesterday, the prison population is now 8,400. Meanwhile, said Davis, “we’ve reduced the Māori prison population by close to 16%.”

One attendee asked all three ministers what they were doing to address racism, especially institutional and systemic racism in education. Davis took the opportunity to bag the opposition, highlighting National and Act’s use of He Puapua as a political football. He said National signed up to the UN declaration on the rights of Indigenous peoples (UNDRIP) in 2010 and then did nothing about it. “When Nanaia Mahuta became minister for Māori development in 2017, she commissioned a report known as He Puapua, which set out a pathway to address the rights for Indigenous people. Of course the opposition has picked that up and said we’re driving a separatist, apartheid agenda. We are fighting against that rhetoric and making sure that it doesn’t grab hold.”

He went on to outline Te Hurihanganui, an education programme being rolled out in six regions to address racism in schools. He also said that he and education minister Chris Hipkins had attended a hui the week prior to talk to Māori in tertiary education about the issue.

Having wrapped up, the ministers still had another four venues to hit, making their way to Te Puea marae, Te Wharekura o Manurewa, Papakura marae, then on to Ngahere Communities. They were in Christchurch on Tuesday, and they’ll be repeating the process in New Plymouth tomorrow and Kaitaia on Friday.