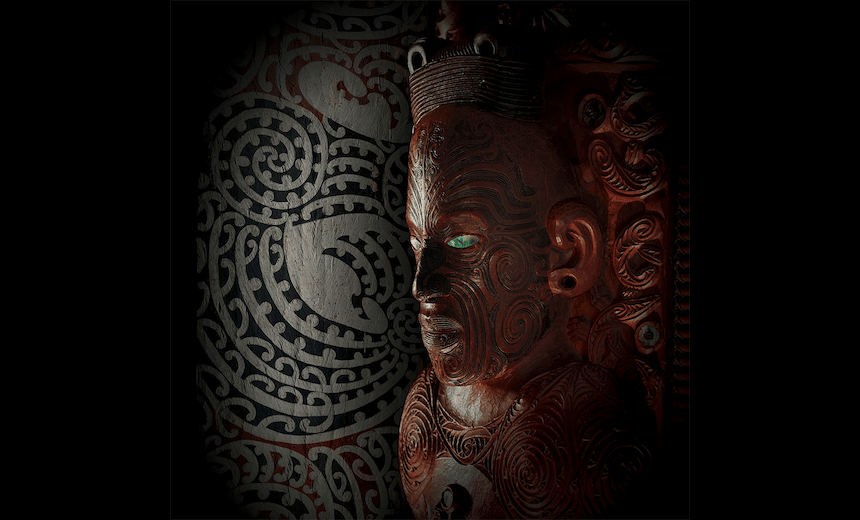 The story of light and shadow

From the nothingness of Te Kore and through the layers of Te Po, grew the atua. Over aeons the children of Ranginui and Papatūānuku watched the increasingly random appearance of energies that rippled around them. In the same intimate darkness, another younger atua studied the energies and noticed patterns and shapes that would form and dissolve. Known as Rongowhakaata, the young atua found a way to catch the energies and bend them to his will. In the darkness of his parents’ embrace, Rongowhakaata imagined how he would use the energies and what he would create.

When the turbulence of Te Wehenga came, Rongowhakaata saw ripples of light slowly enter the discord and darkness, and fill all the spaces. In the newness of the long day, Rongowhakaata felt the despair of deep longing and loneliness emanating from Ranginui and Papatūānuku. Their sadness pervaded the world of light and so he imagined and created a reflection of his sky father in the waters that flowed over Papa. In this way, they could join at will. In another moment of intense imagining he recreated the interplay of light and energy, and into these layers he carved the most intricate of designs and arcs of colour. These he called aura. From the world of atua, the gifts of imagination, innovation and creation are the legacy of Rongowhakaata to his descendants, the carvers of light.

The voice of Rongowhakaata also has its origins in Te Kore, and through time has given expression to the lives and narratives of the people who claim lineage. The same voice expressed the joy of discovery when Horouta waka entered the waters of Te Moananui-a-Kiwa. The karanga reverberated across the blue water in greeting to the new land and soon, the voice of the people became the voice of the land. The sounds of the people filled the spaces of Turanganui-a-Kiwa; most spoke of exploration, of settlement, of challenge, of innovation. Some voices spoke of creativity and the stories were told.

It is the voice of awe and amazement that recalls the arrival of the renowned matakite Te Toiroa among the people of Rongowhakaata. The seer saw a strange waka, large and round with the look of a bird, and on it very strange white beings; ‘pakerewha’ he called them. The voice of warning carried dread and fear when the seer said a darkness would soon descend over the land and the voice whispered of lives and land lost. Not one Rongowhakaata person doubted the prediction. Three years on, in 1769, James Cook arrived in the waters of Te Moananui-a-Kiwa aboard the Endeavour.

The dark clouds had started to gather over the land during the two-day encounter with James Cook. To the English he was a hero and yet the Rongowhakaata voice speaks of unresolved muru and utu. The voice echoes abhorrence at the deliberate violation of tapu and mana of the people. The voice carries anguish at the desecration of property both personal and public, and home invasion. The tangi hotuhotu holds the misery and pain of senseless murder and maiming. The voice echoes unrestrained anger at the assault and kidnap of three youths. Being the first iwi to experience colonisation is difficult to forget and some 248 years on, the modern Rongowhakaata voice is often hostile, filled with anger, harsh.

The voice of Kuia was soft, hypnotic and awe inspiring as she told Mokopuna of the tīpuna in taonga. Mokopuna sat very still, not daring to breathe as Kuia whispered, “I think the tīpuna are lonely.” Mokopuna nodded and Kuia said “we must bring them into the light.” Mokopuna whispered, “Ko Rongowhakaata” and knew just what to do.

Kuia and Mokopuna bowed their heads in prayer as the Rongowhakaata voice calmed and soothed them. When the karakia for a safe journey ended, Mokopuna and Kuia lifted their heads, and a diffused light softly rippled across the dark skies of the horizon. Te Hau-ki-Tūranga called to the tīpuna in taonga and Te Papa Tongarewa prepared to receive them.

Mokopuna: Where did the wish come from Nanny?

Mokopuna: What is the wish Nanny?

Kuia: We wish to remember who we are.

Mokopuna: Did your wish come true?

Kuia: Some of it did.

Mokopuna: What happened to the wish Nanny?

Kuia: I gave it to your mother.

Mokopuna: When Mama gives the wish to me I promise I will make it come true. I will wish for Rongowhakaata.

In the young mind of Mokopuna the imagination is set free and for a very brief moment Mokopuna surrenders to the wonder of the wish, and Mokopuna is open to infinite possibilities. Ko Rongowhakaata Exhibition is a gift, it is the creative interplay of dark with light and came from the fertile imaginings of numerous descendants. Te Papa Tongarewa is the realm of Papatūānuku where the Carvers of Light imagine a new expression.