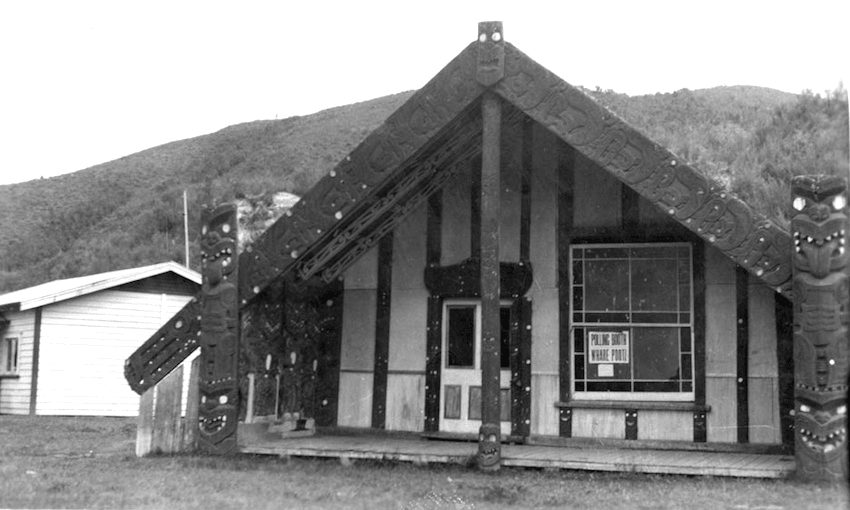 Aren’t Can’t Don’t: 125 years after New Zealand women won the right to vote, we take a look at what the first polling day looked like for Māori women… sort of.

Today is the 125th anniversary of women taking to the polls to vote in the general election for the first time, 10 weeks after their right to vote was signed into law. I was sent this account of the Māori polling day in Waipawa, Hawkes Bay, by Ngāi Tahu researcher Helen Brown.

It makes for uneasy reading. The writer spends an inordinate amount of time ogling the women – it reads like poorly written fan-fiction: “…dark flashing eyes, striking beauty, and more than a suggestion of Oriental voluptuousness.” Ew. We’re familiar with racially coded terms like “dusky”, “noble” and “scornful” (the angry Māori woman trope is as old as time!) but the repeated reference to the men as “specimens” made me feel particularly queasy.

Unfortunately, it’s the only account in the PapersPast archive that refers to Māori women participating in this historical event at all and although it can’t possibly be accurate in portraying the Māori experience, it’s all we have.

IN A MAORI POLLING BOOTH

A reporter of the Napier Evening News visited Waipawa (a Native centre) on the Maori polling day, and thus records something of what he saw about the polling place:

— About 10 o’clock the native voters begin to turn up, and a dozen or so come into the courthouse and squat about, dozens remaining outside under the trees, men, women and children, smoking quietly and talking in their musical language with vivacity and gesticulation. Three-fourths of them wear light blue and white rosettes, in honour of the popular. Henare Tomoana. Native after native comes forward, and has his vote recorded by the clumsy process prescribed. Here and there a Maori voter answers the returning officer in English, but mostly he has to be questioned by the native associate, and his name, the names of his tribe and hapu, and the full designation of the candidate for whom he votes have to be written down. Then the solemn form of initialling the paper on which these particulars are noted has to be gone through by the native associate. That old image takes ever so long to execute the task, but the Maori voter stands gravely looking on, and when told by words or signs to fold the paper, he does it in a clumsy fashion in the air, not being need to the manipulation of papers, and approaching the ballot box, he looks upon that mysterious receptacle as one would gaze upon the great Pyramid, with awe, and drops the paper reverently in. Then, with a quiet inclination of the head, he steals away.

But the sound of soft laughter and rippling chatter tells us that the Female Franchise is appreciated, and that the women are coming forward to register their votes, and very soon they begin to come in. Ancient crones, heavily tatooed and obese, clad in loose drapery, of high colours, and wearing a curiously keen watchful look, roll in and take their part. Now and then enters a damsel escorted by half-a-dozen fine young swains. As the dark beauty approaches the table she giggles at the appearance of things, and laughs over her shoulder at her body guard. Then she tries to look sedate, and fails lamentably in the attempt, and with a pretty blending of coquetry, good humour, and amusedness, she submits herself to the process. Her dusky fingers, defter than the clumsy digits of the men, are still far from skilful in the manipulation of light articles, and she makes comical attempts to fold and drop in the voting paper. The officials fold it for her, on which, looking archly upon them, she giggles as she takes the paper and makes half a dozen unsuccessful attempts to drop it in the “slot.”

This part of the election is very amusing, and sometimes picturesque. In one case a haughty belle walked in, followed by a train of adorers, a figure that a painter would love to reproduce — dark flashing eyes, striking beauty, and more than a suggestion of Oriental voluptuousness. “That’s an heiress,” whispers somebody who knows. It’s a treat to see her, this nonchalant beauty, with the mien of an Empress and a beautiful face that flashes forth scorn to right and left. She comes up and stands before the tribunal and responds to questions with disdainful curtness. She takes the paper, folds it, and imperiously drops it in, and with a disdainfully polite but eminently graceful inclination of her proud head returns to the body of the Court, and passes with regal grace through the knot of her admirers, whose eyes follow her with timid avidity.

But some magnificent specimens of men come in, youths healthy, robust, and graceful, old men with stern noble faces. One warrior I observe with interest. The face is an eminently handsome one, with a massiveness and solidity that inspire one with a feeling of respect and admiration. It is tatooed heavily. The head one may see was once poised on the now bending shoulders, and something in the face tells you that the eyes must have once irradiated it. It looks like a face from which the light has departed, it now exhibits only a pathetic fortitude. The windows of the soul are darkened. The eyes are sightless, and the man is led about helpless.

But one after another, striking looking men come forward, all having the grave dignity and the natural grace which pre-eminently distinguish the Maori. If one wants to see the highest type of a gentlemen, the embodiment of dignity and courtesy, one should see the Maori specimens. They are to my mind absolutely unequalled. The suppleness of the Oriental isn’t there, the vivacity, or arrogance, or gaiety of the European is absent, and in their places one finds a calm and stately demeanour, faces set and reposeful but sweet with intelligence and benevolence.

In comes a gentleman fashionably dressed with a singularly graceful manner and a highbred air and with a dark keen face. He makes an enquiry in his native tongue, and converses with easy grace, sometimes replying in English to questions in that tongue. He votes, and then he makes way for the lady at his side, his wife, and she also votes, acknowledging with a pretty smile and a delightful courtesy that has an old-world flavour the presence of the potentate in the chair.

This article first appeared in the National Library PapersPast archive.