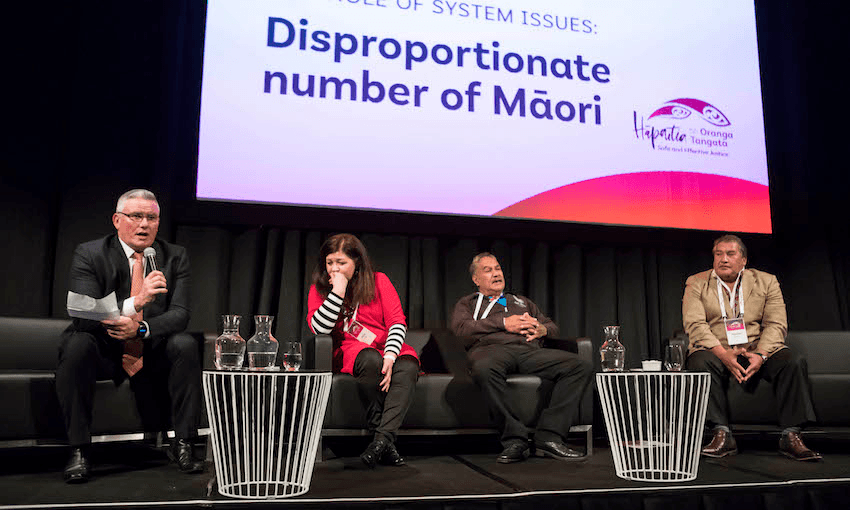 “All those people are looking at me like I shouldn’t be here.” It was a comment made in a whisper but it spoke volumes.

Sam* did stand out in this particular crowd. With full moko kanohi he didn’t exactly blend in with the policy wonks, government officials, academics and NGO workers who gathered in Porirua. For a start, most of them were Pākehā.

‘Those people’ were bedecked in the Wellington power suits and trailing in the wake of ministers.

‘Those people’ attended the workshops and used phrases like ‘trauma-aware’ and ‘victim-focused’, and spoke enthusiastically about reforming the system and feeling safe.

But ‘those people’ looked at this Māori man like he was an alien who had just dropped in from a foreign galaxy. And yet they were all gathered to discuss how to reform a justice system that has over 5000 Māori men locked up behind bars, at a conference on the justice system and what to do to address a burgeoning prison population with no end in sight.

Many, including Minister of Corrections Kelvin Davis, spoke about prison inmates, crime and victims. And many of those who spoke did so both knowledgeably and movingly. But those who are on the receiving end of both crime and its punishment seemed on the periphery more often than not.

There were tensions. Early in the piece Anzac Wallace – lead actor in the iconic film Utu and former resident of Paremoremo – interrupted emcee Alison Mau to ask why Māori weren’t leading the discussion. That frustration simmered throughout the two days, but Māori weren’t the only ones feeling cynical. Victim advocates vented their frustration, both on the stage and behind the scenes. A brief discussion with advocate Louise Nicholas revealed her disappointment about how victims had been sidelined.

For Sam the topic couldn’t be summed up by numbers or a touching anecdote. It was his life. Despite this, he told me he felt like his presence at the conference was an intrusion.

Yet he embodied not only criminal but also victim. His life didn’t start, or finish, when he was first arrested for a driving offence, later to become longer lags for more serious crimes.

His journey began when he was a kid, suffering horrendous violence at the hands of his father. He told me he was put in a welfare home to protect him, but all it did was introduce him to violence from strangers. Prison simply became an extension of his childhood. But it wasn’t the harshness of the institutions that stuck in his memory – it was the offhand tone of a judge who gave him another year for a minor offence. It was the lack of compassion when he lost loved ones on the outside and couldn’t get to their tangi because of the cost. It was the loss of the tiny speck of light at the end of the tunnel, snuffed out by a system that gave no thought to his long-term future.

After spending the best part of 30 years in and out of the system both as a ward of the state and a prison inmate, he was the real expert in a room of 700 people.

When I asked if he would be willing to talk to me for a story, he seemed bewildered, even slightly embarrassed. “Yeah bro, anything to help you with your kaupapa,” he offered, almost apologetically.

No, I said, it’s not my kaupapa, it’s yours. I want to put you up front on the paepae.

His eyes lit up and he smiled a beautiful smile. He gave me a hug.

Someone wanted to listen to him.

In the end he couldn’t bring himself to be heard. It was simply too hard and the implications too many. Despite being in a good space now after a lot of hard work, the whakamā or shame of his past still hung over him.

I’d first seen him during a session on the overrepresentation of Māori in the criminal justice system. The panel discussion was interesting, and the panellists sincere and articulate. Several women who had been in prison got up and gave moving accounts of their experience.

But this Māori man couldn’t bring himself to share his experience, even though I could see he was agitated by the discussion.

I got up and spoke briefly about the many state wards I had spoken to who had been through welfare homes. They were victims before they were criminals, I said, picking up an anecdote that Kelvin Davis shared of a guy who had been through that system as a child and had ended up in gangs and prison as an adult.

There were thousands of variations on that story, I pointed out. But they had been silenced, often by the state that continues to treat them more as a legal liability than as victims. Maybe it was time to show them some compassion and aroha.

It was immediately after this that he came up to me. I’d been describing him.

My unease that Māori males had been sidelined or were an afterthought was confirmed a number of times. I’d watched with discomfort during a panel discussion with some teenagers. Some of the younger boys seemed out of their depth and didn’t have any answers. I found out later that they were ring-ins, kids from the kapa haka group who were chucked on stage in front of 700 people at the last minute because only one of the original five students was Māori (who spoke very well, as did the others that had been able to prepare).

The irony was that like Sam, they probably did have quite a bit of insight to offer in terms of what it’s like for young Māori and the constant threat of the justice system that hangs over them. They just needed some space to talk.