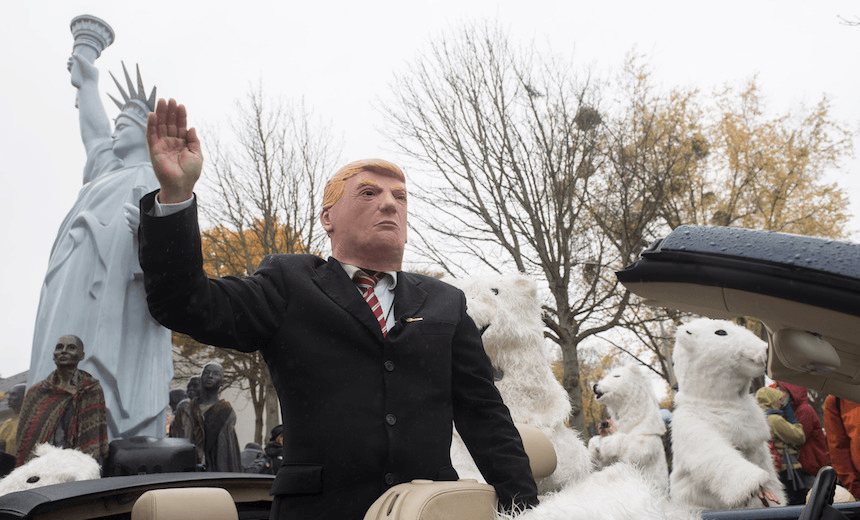 Kera Sherwood-O’Regan (Kāi Tahu) is an Aotearoa Youth Leadership Institute delegate to COP23, the United Nations Climate Talks in Bonn, Germany, reporting over the three-week conference. This week: COP23 is finally over, but what did it achieve?

This is Kara Sherwood-O’Regan’s third report on the COP23 climate change talks and their outcomes for indigenous people. Read her previous dispatches here.

Two weeks of intense negotiations have come to a close and I have no idea what to make of them.

I suspect it will take weeks, if not months, to really process everything that happened in the alternate reality bubble that existed in Bonn this month. It felt like the entire city was swallowed up by a political force field, completely cut off from the rest of the world. In that bubble, all the rules you learned in POLSCI; the years of activism; the social norms; everything you thought you knew about climate change, and yourself even, all gets thrown out the window.

In this parallel universe it is so easy to get swept up in the pedantry and the strength of a specific word in square brackets. Soon, you too become a COP zombie: three week’s sleep debt propped up by your fancy badge and sense of superiority in understanding the intricate details of a precise tidbit of text.

With such a narrow focus, it’s easy to forget that there are lives enclosed in those square brackets, and livelihoods at stake in between each line.

With many important decisions pushed until 2018, a lack of increased ambition, unremarkable outcomes on climate finance and lack of commitment from developed countries to address “loss and damage” of those already suffering, COP23 fell woefully short of making much real progress. Don’t get me wrong, I didn’t expect to come back with climate change solved overnight, but this feeling of “not enough” is gutting.

This isn’t a future issue anymore. We don’t have the luxury of time. States (particularly small islands and those in the Global South) who have contributed least to causing climate change are already suffering its effects. Meanwhile, huge emitters and developed nations are so removed from this reality that they can enjoy debating comma placement.

In the alternate reality bubble that is COP, behind all the square brackets and legal talk, this is what is being negotiated.

If we want real action on climate change, then this political bubble needs to be burst. And fast.

But where do we start?

Over the two weeks of COP, our groups organised multiple actions for indigenous rights within the climate movement. I wrote about “Pass the Mic” last week, but we also spoke on panels and press conferences; we gave interviews to international media; we had a prayer circle, followed by a sing-in in the middle of the negotiation zone to protest the stalling on the Local Communities and Indigenous Peoples Platform (LCIPP). We were up at all hours organising actions to ensure negotiators took our rights into account, and heard our stories.

Parties were granted extra time to continue negotiations on the LCIPP, and finally, Indigenous Peoples were literally passed the mic. Is this all attributable to our protests? Who knows. It’s a win, and certainly deserved the celebratory Kölsch (local beer) that was downed shortly thereafter.

There were other great actions that hit headlines around the world- from the Climate March to End Coal, to the US People’s Delegation shutting down the United States’ presentation on fossil fuels. These actions remind negotiators, and politicians back home, that behind all the acronyms are real people.

However, it’s clear that at these negotiations, some voices were louder than others, and some voices simply weren’t being heard. COP is such a huge machine that if we want to get meaningful movement on climate change as a whole, we need more from everyone.

We need Birkenstocks on the ground, but particularly, we need more of them to belong to people with lived experience of marginalisation and bearing the brunt of climate change. It isn’t enough for COP to be the exclusive domain of the privileged few who have letters after their names or bank balances that enable them to travel the world in protest.

While at COP, I was impressed with Ministers Shaw and Sio’s stated commitment to climate action, and to taking a leadership role within the Pacific. I was filled with hope that our new government is ready to take action on what the Prime Minister calls the “nuclear free moment” of our generation. I’ve been equally impressed with discussions around Te Tiriti, and ensuring adequate representation of tangata whenua and marginalised communities back home.

But if our government really wants to make a difference, we need less talking from politicians, and more listening.

If this is to be our “nuclear free moment” then our government needs to punch above their weight, and not just on the podium or in front of the press. They need to put their money where their mouth is, and make sure that our kaumātua, indigenous and Pacific peoples, people with disabilities, and others at the forefront of the climate battle have a place to advocate and be heard within these negotiations. Talking about us isn’t the same as including us.

We need to burst the bubble from the inside, to remind negotiators and politicians around the world that climate change has a human face. We need our people to tell our own stories, and to hold parties to account. For that, we need to be in the room, and, fortunately, that’s something our own government can fix very easily.