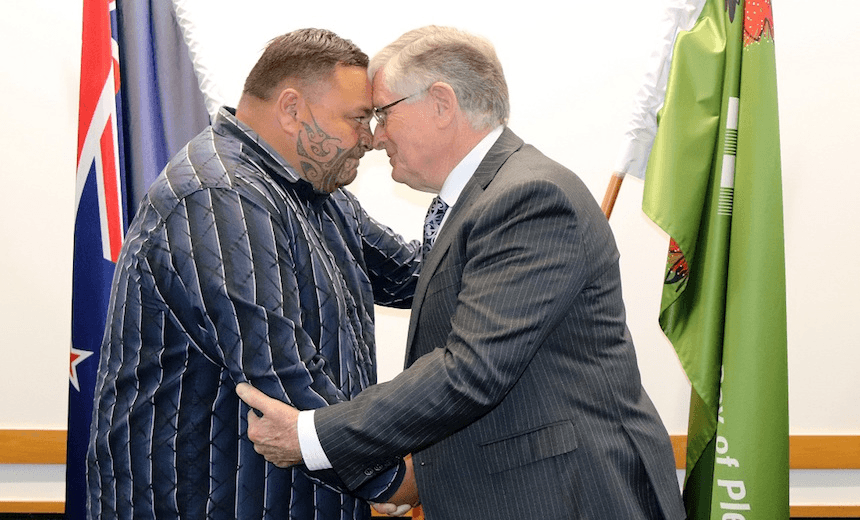 In our balmy autumn months in Tauranga Moana, during the commemorations for Te Weranga (the 1867 Tauranga Bush Campaign), I have often had the privilege of walking down hills from old pā and kāinga with the Western Bay of Plenty mayor, Garry Webber.

Garry (pictured above with Reon Tuanau) is an energetic older Pākehā man with a long business career behind him and his secret is he is an excellent listener. So he had listened as our speakers talked about who we were and who we are. On our way down the hills he would talk quietly about his admiration for our survival and his desire for us to succeed alongside his council.

This quiet but firm man showed courageous leadership alongside his Western Bay of Plenty district council to support the the establishment of one or more Māori wards. The 9-3 vote of the full council came after a unanimous vote from the Council’s own Tauranga Moana/Te Arawa ki Takutai Partnership Forum.

I never had any doubts that within the confines of the council the desire for both a greater expression of the Treaty relationship and improved representation for our pressing social and economic issues would be honoured. But outside of that forum, debate, discussion and mature conflict so easily fall away before hate and fear.

Three councillors voted against the motion for Māori wards: Margaret Murray-Benge, Kevin Marsh and Mike Lally. Margaret Murray-Benge was particularly dissatisfied with losing a duly-constituted democratic vote and has turned to the shabby strategy of getting 5% of ratepayers to demand a poll on the decision.

Hobson’s Pledge have come roaring in behind her decision to relitigate the Māori wards with a poll. The speedy support she has been given was probably helped by the fact Margaret and Don Brash, leader of Hobson’s Pledge, are a couple.

Don and I have sat on a stage together at a panel on income inequality. Don struck me as deeply learned on economic matters and yet blinkered on social and political issues. He didn’t seem to be a great listener; he was quick to answer questions whilst they were still being asked.

As I sat there I marvelled at him; he seemed genuine but introverted. As far as I can tell he actually believes iwi are pushing for apartheid, for racial segregation and discrimination. He seems to believes that all of the scholarship and historical record to date has covered up the truth about the Treaty. He also appears to have faith that it was just a matter skill and ability that put Pākehā men on top of everyone else.

I don’t think it is an act or a manipulation. I believe he is just as fearful of Māori aspirations for partnership as the people he energised at Orewa in 2004. So he is deadly serious in his criticism of Māori wards and in his support of Margaret’s poll.

Don and Margaret would be a sideshow in Auckland or Wellington. But in Tauranga Moana, Hobson’s Pledge always draw a packed house to its meetings, packed with angry and confused Pākehā elderly who are watching their pre-1970s monochromatic world slip away.

These same elderly have an advantage over many – they actually vote. Hobson’s Pledge have the capacity to pull together 5% of ratepayers in the district who feel as they do. They may even have enough to overturn the decision.

Yet in the past decade, as our region’s population grows, as people from Auckland move here, as Tauranga city finds its feet, there is an evolution happening.

Every now and then, leaders like Garry Webber who are excited by change and possibility, are voted onto councils. More and more of our residents want to know the story of the land they are standing on; they want to know the story of tāngata whenua. People can see that our regional identity is being enhanced by the the unique contribution of tāngata whenua.

Nevertheless, I suspect here in Tauranga Moana we will have a choice to make in 2018. Five percent of ratepayers will probably call for Margaret’s poll on the Māori wards decision and it will be held. And then we vote.

The question is, will our votes be ruled by a fearful longing for the past or our hopeful future?

In 2017 on Tawhitinui marae, north of Tauranga city, I told a story to 500 people of our Pirirākau resistance at Te Weranga. The majority of the attendees were Pākehā. Throughout the day the Whakamarama Community Inc. threw themselves into catering and organisation. Our Pirirākau iwi could not have honoured our ancestors as well as we did without our Pākehā brothers and sisters.

If you are in the Western Bay of Plenty district you will have a choice. May you be as the Pākehā members of the Whakamarama community who see opportunity in diversity and are proud of our iwi and the history here where we live together. May you be one in a large majority that votes to affirm Māori Wards to send a message that fear and hate are fading away and in their place, debate, discussion and mature conflict.

Send a message for our mokopuna: the people of the Western Bay of Plenty want their iwi to return as rangatira to partner with the Crown at the council table. To return as equals, as friends and as whānau.