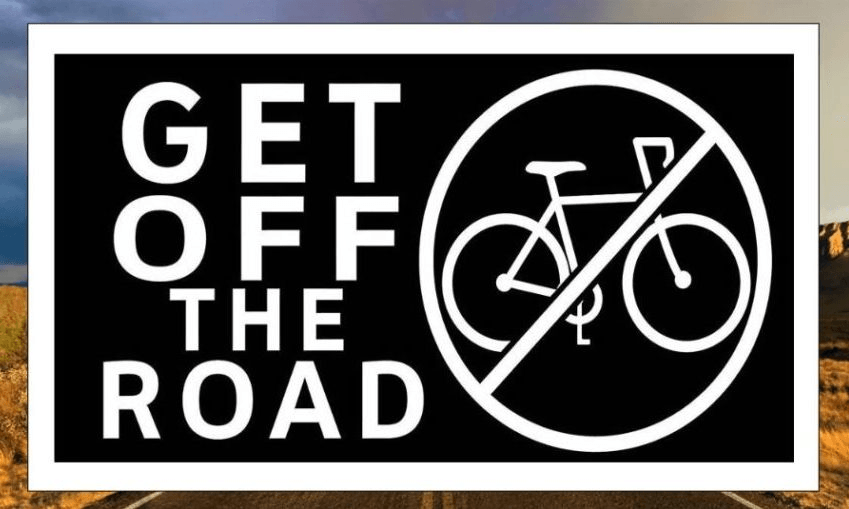 The bike-hating sticker owner underscores just what a nightmare it is to try to get around Auckland on a bicycle, writes Amanda Chapman

I first saw that awful sticker while stuck at a traffic light. It contained an iconised bike enclosed within a circular no symbol. Next to it, in all caps: GET OFF THE ROAD. Straight to the point. I was driving at the time, it’s difficult to get from West Auckland to the North Shore on a weekend via any other means (that’s a whole other can of worms though). However, I was relieved I was not on my bike, forced to share the road with this civic-minded, 4WD lobbyist. I couldn’t help but wonder: what sort of person harbours so much resentment towards cyclists that they would adorn their vehicle with such a sentiment. Did they pick up the sticker by chance? Where do you even find such a thing? I pictured the driver ordering the sticker online, smouldering with resentment. That will show those pesky cyclists!

I stopped cycling when I moved (back) to Auckland in my teens. Living rurally I had cycled daily. The roads were flat and quiet, and although it was foggy and cold, 13-year-old me felt comfortable and safe. In Auckland, my teenage self attempted to cycle to the shops only once. Wobbly and unsure of myself, I ended up on the footpath as there were no cycle lanes. The road was terrifying, but the footpath was just as unappealing: narrow, bumpy and full of pedestrians. I was gutted, realising I would no longer feel the freedom of cycling an open road to escape my teenaged hell (aka boredom). My bike quickly became neglected, and I eventually gave it away.

In recent years, I have made a conscious effort to take up cycling again. I started small, cycling the 10 minutes to my train station. I kept this up, until the day I got off my train to find my bike had been stolen. It was the crappiest bike on the rack, but it had the flimsiest lock. I then inherited a neglected bike, too big and difficult to ride, but I persisted. Eventually I borrowed a friend’s smaller and newer bike, I started cycling to work regularly. It was only a 25 minute cycle, which was significantly faster than driving, due to not having to queue at the motorway on-ramp.

I had several close calls while cycling to work through a light industrial area. Battling heavy trucks on deadlines, one came up behind me attempting to pass as the road narrowed towards a roundabout. I was pushed into the kerb, which I hit with my pedal, got the wobbles and nearly fell under the massive wheels of the freight vehicle. Left shaken and pissed off I watched the truck speed off, oblivious to my near death experience. My cycling friends called me brave for cycling that stretch of road. I considered them brave for cycling long distances and into the city centre. After all, I was only cycling five kilometres.

While Auckland has some amazing cycle lanes, they are disjointed. There is a cycleway on the way to work, but I have to cross a five lane arterial road to get to it. It’s also a longer detour compared to taking the main roads – as, unfortunately, many of Auckland’s few cycle lanes are. There are also numerous “cycle lanes” that are really just that extra bit of road with a bike icon painted on it every 50 metres. Green Lane West, for instance, which Google Maps and Auckland Transport both informed was a cycle lane, had buses nearly peeling off my elbows.

Despite the barriers I have faced, I keep pushing myself to cycle. The more I cycle, the more I prefer it and find it easier to keep up. I don’t have to stress about traffic and parking, or suffer the environmental guilt from driving my ancient petrol car. Most importantly, cycling improves my fitness and my mood – that is, if I don’t encounter any aggressive drivers trying to claim my elbows or advertising their dislike of me with snarky stickers.

It’s no secret that Auckland is currently lacking decent cycle safe infrastructure. As a result, drivers are not as aware of cyclists and resent sharing the road with them. However, a recent study shows that in places with good cycle infrastructure drivers are more perceptive of their surroundings and willing to slow down. Protected cycle infrastructure is thus beneficial for both cyclists and drivers. These protected cycleways also encourage people that would not otherwise consider cycling, allowing them the freedom to take up cycling safely.

While Auckland builds safer shared roads, drivers need to be more aware of cyclists and overcome their bike lash. After all, cyclists are paving the way for less traffic and a better city. As for the bike hating sticker owner, they will eventually come to realise how embarrassing that sticker is – when they trade it in for a bike.