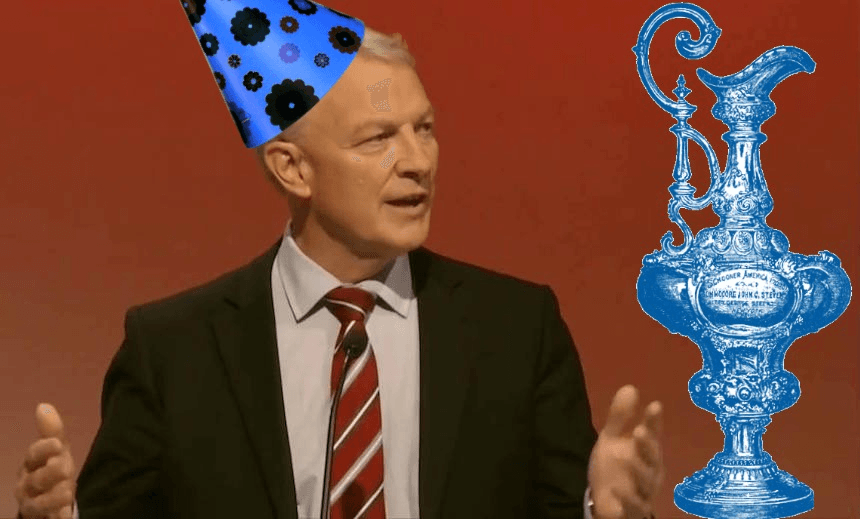 Where’s Phil? Eight months into his first term as mayor, Phil Goff hasn’t had any spectacular embarrassments and he hasn’t blown the budget. Is that good enough? Simon Wilson doesn’t think so, and each day this week he’s got a challenge for the mayor. Here’s the first.

Why isn’t Phil Goff a champion for the defence of the America’s Cup?

He’s excited that Emirates Team New Zealand has won the Cup – he told us so when he spoke to the crowd at the homecoming parade. And he authorised the parade. That was good. He’s also made it clear the council is not just going to start handing out cash – either to ETNZ itself or to whoever’s involved in building infrastructure for the Cup defence. That’s good too. The America’s Cup will be an enormous boon for Auckland but it doesn’t follow council should be an easy touch.

But it was a shame Goff allowed his financial prudence to make him sound like a killjoy. Despite the parade, Goff hasn’t positioned himself as a champion of the Cup defence and a cheerleader for Auckland as host.

Why hasn’t he done this? Does he not understand that this is the most important job of the mayor?

Goff, by now, should have announced that he’s setting up a taskforce: a high-powered group from the government and private sector to lead and coordinate the city’s preparations. It’s not that we need a special new group to work out where and how the defenders and challengers will be based, although this group should oversee and help with that. The real challenge is to ensure the city makes the most of the opportunity.

Because that’s what this is. An opportunity to transform Auckland for the better. To deal decisively with some of the acute problems we have in transport. To create a genuinely splendid waterfront, from harbour bridge to Bledisloe Wharf, and in other parts of the Waitemata harbour coastline. To use the Cup defence, and the year of APEC activities that will immediately follow it, as a chance to generate civic engagement among all of Auckland’s communities.

You know how in 2000 and 2003 the America’s Cup campaigns gave Auckland the revitalised waterfront precinct we call the Viaduct? Think of that as a prototype. We’ve got the Tank Farm to develop and the CRL to finish (and yes, it can be done in time, certainly at the city end – more on this soon). We’ve got light rail to introduce downtown and to run out to Dominion Rd and on to the airport (and yes, the Greens are right, that can be done in time too – more on this soon too).

We’ve got a big waterfront redesign project to do, covering the area from what will be the new Commercial Bay in front of the Britomart railway station, running east along Quay St, rethinking Queens Wharf and Captain Cook Wharf too. And obviously we need to get those cars off the wharves – just build a car park tower for them already. There’s a big bike share scheme to introduce, a cycling and walking network to roll out and a bike-to-school programme to establish.

There are a thousand other projects that I don’t know about and nor will Phil Goff, yet, because they will be community initiated – and the process of activating communities to seize the moment needs to start now too. It’s got to be ground up: if the America’s Cup is Auckland’s Cup, what do local groups and local communities want to do – to build, organise, facilitate, create – to make that mean something to them?

This is our Olympics, except it’s better than that because it’s not going to cost the city billions and leave us stranded with white elephant sporting venues that no one uses afterwards. That’s the beauty of the America’s Cup: what you build and how you change is all upside for the city, if you do it right. But we need to get cracking, and we need – we really need – the mayor to become the champion who makes it happen.

So, to kickstart it all, what about this: why doesn’t Phil Goff hold a big civic reception? Put the movers and shakers of industry and commerce in the room, so they can do some moving and shaking. And the people who hold our communities together. The glamour guys and girls of sailing and the other sports, our best and brightest artists, our philanthropists and our glittering celebs, of course. The government and the politicians who are not-government too, because this is multipartisan.

Put Grant Dalton on stage, because who doesn’t love listening to a crusty ol’ bugger make a good ol’ speech? Put Stephen Tindall on stage, because did you notice the chair of ETNZ is a proud and supremely motivated Aucklander. I’m betting the things he’s got to say to this city now are things we need really to hear.

Bring in a couple of people from elsewhere: inspirational geniuses, make-it-happen wizards, leaders in urban transformation. Janette Sadik-Khan, former Transportation Commissioner in New York City, would be good to get (she was terrific when she visited once before); so, for that matter, would her old boss, former mayor Michael Bloomberg.

Get Dave Dobbyn to sing something new; ask Parris Goebel to bring it, and Lorde, and the Auckland Philharmonia. And impress on everyone there: we’re going to use this to fix Auckland, with law changes, public and private funding, new ways of raising money, commitment, engagement, leadership. And here’s how we’re starting, and here’s how high we’re aiming, and here’s how and why we need your help. And then get down to it.

Cheerleading, being the champion. It’s your time, Phil. Time to shine.

[Update: the following parts of this series will now be published next week.]