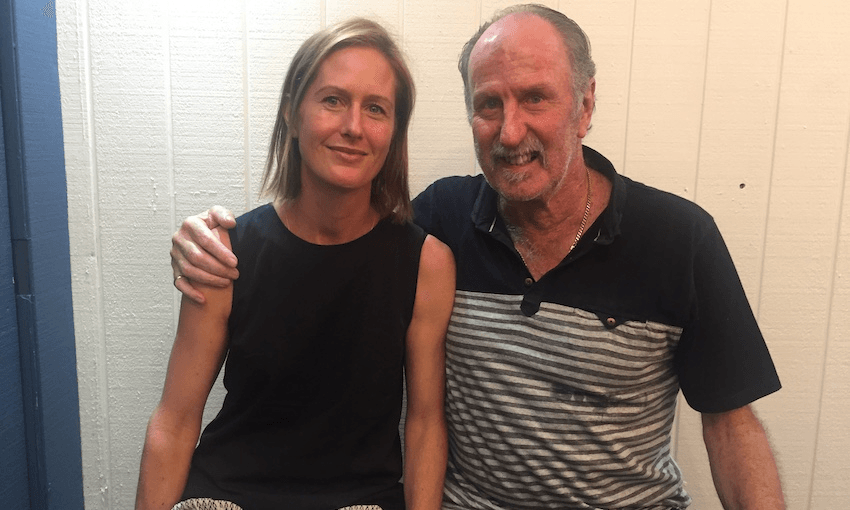 Pat Menzies and his daughter Michelle, who co-runs the business.

By Pat Menzies
Guest writer
Made possible by

Pat Menzies and his daughter Michelle, who co-runs the business.

To mark 4 Days of Fashion in the City, four of downtown Auckland’s fashion personalities are sharing their experiences of the industry. Today, iconic shoe store owner Pat Menzies recalls the era when flares and platforms graced the nightclubs of Queen St, and how that history has kept his store relevant in 2018.

One day in the late 70s, a man named Reg came into my store with this bag of shoes. He’d been up and down New Zealand and he hadn’t sold a single pair. He said: “Pat, I’ve got these boots, and they’ve got to be the ugliest things I’ve seen. They’re called Dr Martens.”

He bought out a pair of ten ups, eight ups, and a pair of Gibsons. I bought the lot off him, he couldn’t believe it. And just like that we were the first shop in New Zealand to have Dr Martens.

They’ve become a special part of Pat Menzies. For years we were the only shop bringing them in. Now, I love hearing people’s stories about when they got their first pair of Docs from our store. It’s those relationships that define the place Pat Menzies has in the city.

I started in this store in 1967. I was 19 years old and it was called Spencer Wade, named after the owner. I was just a boy and it was my job to polish all the shoes.

I took over in 1974. In that era you had to have a licence to bring in shoes and you had to apply to the government to import footwear. I had to advertise in the paper to buy a licence and ended up getting one off a wealthy individual who didn’t even own a shoe shop. When you look at it now it was quite an amazing system, designed to protect the local industry and the workers of New Zealand.

I was really lucky to get into the business when I did. It was the changing of a generation and I was right into fashion and the nightclub scene. We were considered the long haired clubbies.

My shop was at the heart of that change in New Zealand. I was young and a lot of the guys who had stores were older family shoe shops, that were quite conservative. So I bought the wildest stuff in. I had the best selection of high fashion footwear in the country; the shop was full of patent leather platforms in pink and yellow, and points, and Chelsea boots. I built up an incredible following of loyal customers. On a Friday night, when the shop was much smaller than it is now, we would sell 75 to 100 pairs of shoes. People would queue up, and you couldn’t swing a cat in there.

It was the era of The Beatles, The Rolling Stones. Every club you went to was full of live bands. The town was pumping. I used to go to all the downtown nightclubs – the Beatle Inn, the Shiralee, the Top Twenty. And the fashion in the city went hand in hand with that scene.

When I bought the shop I was all in. I sold my house, I sold everything I had to, to get that shop. And it worked. I took a big risk, and I got a bit lucky. I was probably right guy in the right place, at that moment when fashion was really changing. I created a niche where the rest of these guys were a little bit conservative. If guys wanted something different they came to Pat Menzies. And I just built up this huge following.

But the city has changed hugely in the last 40 years. Retail has never been more difficult, and we’ve had competition land in our lap. Two years ago we had to make some big decisions about the future of the business. This meant going back to what gave us our reputation and made it special. It was about coming back to our history – it’s something we are really proud of. Most of our staff have been with us for more than 20 years, and they know shoes like no one else in the city. That’s why it’s really special that the store has gone full circle and become a family business again. If my daughter wasn’t here the shop probably wouldn’t still be going. Michelle has taught me a lot and it’s meant I’ve moved into the background now.

These days we want people to know about the story of our store, and we keep working on making Pat Menzies a destination, because we need to make shopping for shoes an experience that people enjoy. Our store in Canterbury Arcade is a special part of the city’s history, and people keep coming back for that.

Our success and persistence has relied on the close relationships we have with iconic shoe brands. Going back to our history again, I managed to get a licence to import canvas shoes and I brought in around 7000 pairs of Chuck Taylors, and from that point Converse was one of our cornerstone brands.

That loyalty continues today which is why were are partnering with Converse for the 4 Days of Fashion. On Saturday next week artist Lizzie Snow, who works under the name Fortyonehundred, is going to be in our store doing her unique designs on Converse shoes that customers have purchased that day. It’s events like this, and brands like Converse, that keep our store alive.

Queen St, Auckland will always be a special place for me. It’s where I started, and it’s where fashion found its place in New Zealand. But things are always changing and the rise of the malls means young people don’t have to come to the city anymore. But if stores like us are still here, there’s a reason for them to come, something for them to experience. Now the children of those people who were buying their platforms, and Chelsea boots, and their first pair of Docs off us, can come here. Because they know they get more than just a new pair of shoes.

This content is brought to you by Heart of the City. On Saturday 24 March come into Pat Menzies  to meet artist Fortyonehundered, and watch her create one of her mandala masterpieces. Buy a pair of Converse on the day and you can have one of her original designs painted onto your new sneakers.