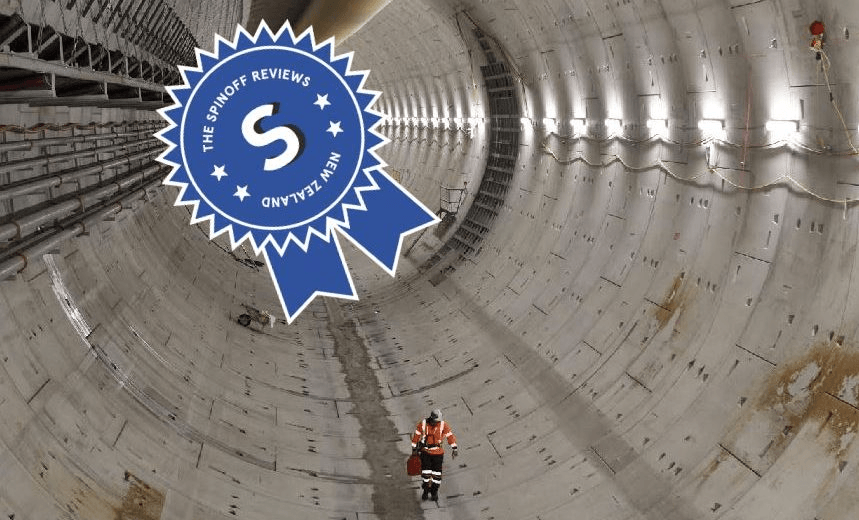 We review the entire country and culture of New Zealand, one thing at a time. Today: the deepest, dearest road project in New Zealand was meant to have opened over a month ago. Toby Manhire critiques it.

There is so much to like about the Waterview Tunnel. The subterranean nucleus of the Waterview Connection, “New Zealand’s biggest and most ambitious road project ever”, the pair of tunnels combined run almost 5km under Waterview and Avondale, as deep as 45 metres below ground. The only trouble is they were meant to be opened well before now and they’re not.

The $1.4bn project is the missing link in the chain of Auckland’s motorway system, connecting highways 20 and 16 and promising a smoother, more efficient network, or at least shunting the logjam down the way a bit. Its on-ramps and off-ramps curve like the rings of Saturn through the silver Point Chevalier sky. But they lead to a mysterious overdue tunnel, and it would be better if it were open rather than closed, and it is closed.

The Waterview Tunnel was burrowed by Alice, an elaborate boring machine. She ate up the earth and pooed it out, she offered the opportunity for cheerful asides about being boring but not boring, she captured the hearts of the city’s children in the cause of roading infrastructure, she was named after a public vote backed the submission of a 9-year-old boy, and, who knows, maybe he’ll be able to legally drive through it by the time it opens.

Handsome signs, white on green and gold on black, announce the Waterview tunnel to northbound motorists on SH20, as well as west- and eastbound motorists on SH16. They may be the best signs you’ll see anywhere on a New Zealand motorway. They are world class signs. But they point to disappointment. The tunnel is not open, they say, with an unmistakable melancholy.

The playground at Waterview, the new one which was part of the deal to keep the locals sweet, the one with the basketball court and the BMX jumps and the watery games, is very good, and has the great advantage of being open and usable.

The tunnel is not open or usable. Why not? According to NZTA, it’s all about an “intermittent fault in the software for the jet fan and water extraction pump system which are part of the deluge system”. They say it’s not about faulty ventilation and it’s not about dodgy steel and it’s not about the possibility of massive peak-time backlog chaos on the Northwestern and it’s not about collapsing concrete towers, and safety must come first and we should just calm down and wait a month or so.

But what if they’ve discovered a hidden city? What if Alice uncovered a wonderland, with knaves of hearts and pools of tears and a turtle singing the Lobster Quadrille and the government has covered it up? What if they’ve struck gold, and they don’t know what to do with it? What if workers keep on disappearing and they suspect there might be a whole race of half-slug-half-humans down there and the government has covered it up?

Verdict: Someday we’ll find it, the Waterview connection. The lovers, the dreamers and me. Or will we?

Good or bad: Bad, mostly because it is not open / may not exist, but the playground is good.