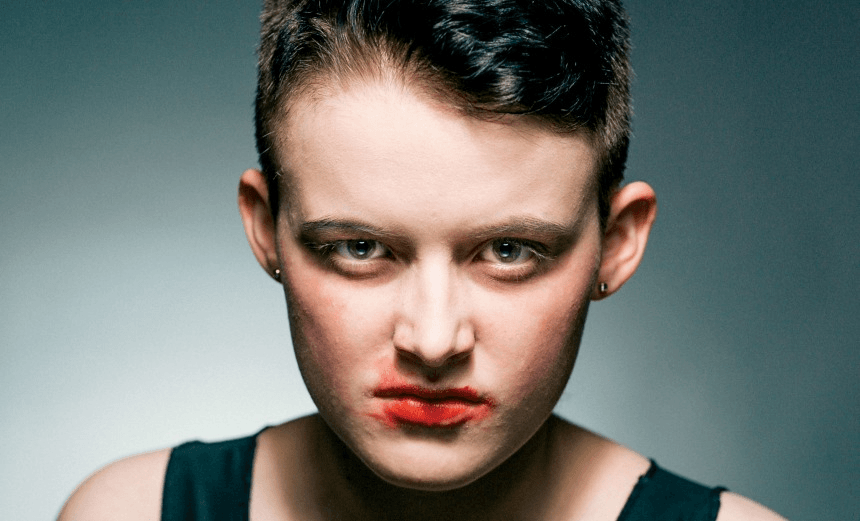 If a phone case is a window to the soul, the pink “well behaved women seldom make history” emblazoned on theatre-maker star Eleanor Bishop’s pretty much nails it. Alongside collaborator Julia Croft, Eleanor will indeed be making history when Boys – her adaptation of Greg McGee’s iconic play Foreskin’s Lament – premieres as a part of Auckland Theatre Company’s Here & Now festival over the next four days. Call me hysterical, but a millennial woman updating a sacred artistic rumination on New Zealand masculinity doesn’t seem traditionally well behaved.

Adapted for a contemporary audience and with a 16-strong cast of young performers, the play examines the place of rugby culture, locker-room banter and toxic masculinity in 2017 New Zealand. Weaving together local news events from Tony Veitch to the Chiefs stripper scandal to the trial of cricketer Scott Kuggeleijn for rape, Boys questions how much masculinity in New Zealand has changed since 1980, if at all.

I sat down with Eleanor in a locker room of our own to see if she had the answers.

A lot of the local news stories used in Boys are pretty recent. Was the project inspired by them happening at once or were you already working on the idea?

About 18 months ago Julia [Croft] and I were sitting in a room trying to find a project to do together and we just went down this Tony Veitch Google hole. We wanted to do something with all the material but we didn’t know what. About six months later, I realised that Foreskin’s Lament would be good. I had been in the States deconstructing classic plays over there, like Shakespeare, and I thought it would be so fun to do the same to a New Zealand classic.

We pitched it to ATC, and right after that the Chiefs incident happened. Obviously that was an awful story, but it strengthened the rugby link and made the connection between Foreskin’s Lament and the other cases even clearer. Unfortunately, more and more things have come to light since, so we’ve just put it all in the play.

What was it about the Tony Veitch narrative that grabbed you initially?

We were really interested in the way the media talked about it. One of the things we use in the show is a Tony Veitch headline: “Tony Veitch: I’m back and moving on”. The second act is really drawing attention to the language that the media use to report on these things.

In the John Key ponytail bit, we use a clip of Pam Corkery and Paul Henry. Pam Corkery says “that’s sexual harassment” and Paul Henry says “well, we haven’t called it that”. Pam says “the law will” and Paul responds “well we’ve only got her side of the story, we haven’t heard his side”. It’s just that same thing that we keep hearing over and over in the media – the disbelief of women. That’s what we’ve been trying to grapple with.

What do you think is going on with “the locker room” becoming this weird defence for being able to say terrible things that men can’t say anywhere else?

I think people perceive the locker room as a space where men can bond and be intimate with each other and a way that they do that is through misogyny – objectifying women and bragging about sexual conquests. There’s rape jokes, there’s the tacit endorsement of sexual assault like in Trump’s case. But it’s all supposed to be fine, because that’s how men relate to each other when they are alone in that space, and that’s how they be fraternal and connect.

Obviously, I don’t agree with any of that. When people say that they disagree with locker room culture, men get really defensive, like we are taking away their space and their chance to bond. We have a line about that in the play: “Can’t you have a good time without misogyny?” Why does so much of male bonding always have to be at the expense of women?

That’s what Boys is really about: men, the culture they are in, and changing it from the inside with young men and women standing alongside each other. Theatre’s kind of a utopian space, so we are creating this world that we want to see.

Do you feel like theatre is a more useful space for unravelling these complex issues because you can kind of make the rules?

Yeah! Well, every form of art and activism has its strengths and weaknesses, but I think theatre can do things that essays, for example, can’t. Theatre is a space of emotion. You can see these young people on stage grappling with this huge epic culture that they are a part of and have contributed to. It’s painful undoing your own misogyny and your own complicity within that system.

Foreskin’s Lament was yonks ago. Without giving too much away can you tell us what has changed between these two works?

The play is really about the culture of a rugby team so toxic and competitive that it could allow somebody to kick his own team member in the head twice and kill him. That part specifically has changed a lot, from what I have heard from the young men who play rugby, around professionalism and safety. There’s still that culture that you’re a really tough guy if you play while you’re injured.

I think rugby has changed a lot, but we’re trying to move beyond that. There are still links to rugby, but there’s a bigger locker-room culture going on. And that hasn’t really changed at all, it’s just morphed into different permutations, and online, and there’s still that deep vein of misogyny in New Zealand. A big part of that is the culture of silence, that men aren’t allowed to express emotion and if they do, they get called a pussy.

You mentioned that theatre can be a utopia to explore these ideas, but have you ever encountered sexism professionally in that same sphere?

Oh yeah. Once I was in a mixed-gender group where we were making a new theatre piece and a woman was talking about her experience of walking home at night and feeling really unsafe. Every woman in the room related, you know we all know that feeling. It was very passionate and angry and there was a lot of emotion, but immediately one of the men jumped in and said that he totally related because when he walks behind a woman he can tell that she’s scared of him. And then all the other men jumped in as well sharing similar stories.

That, to me, was an example of how those men co-opted that conversation in that moment. Their concern about seeming creepy, in comparison to a woman being shit scared for her life every time she walks home, are not equal. In that moment, myself and the other women felt like we were not being listened to and were being talked over.

I understand in these feminist conversations that men are really passionate about it and they really do want to help, but listen first and don’t make it about you.

How are you going to break through beyond what I’m assuming is already a pretty progressive theatre audience and get to the youths?

Well we’re on at the ASB Waterfront Theatre, which is a huge deal for us to work on that scale. I’m very grateful to Here & Now and Auckland Theatre Company for that opportunity. We only have four performances, which is crazy, but the Here & Now festival is focused on young people and young people’s work. I think that, even if you are a progressive young person there will be things in the play that are challenging to you.

We have 16 young cast members who are all pushing to get their non-theatre friends along, as well as reaching out to high schools and universities. There’ll also be 20-minute discussions afterwards every night, where we can talk to the audience and make some of the issues and solutions a bit more tangible and practical. We really want lots of young people to come, but there are some jokes in there for the older people too.

What’s one thing you’d hope young people in New Zealand would take away from seeing Boys?

I want young people to see their own experiences as part of a wider culture that we can change from inside. For young guys, I want them to listen to the language that they are hearing in these male spaces around them and have a think about what it means. For young women, it’s seeing your experience of being groped in town – that’s the one I hear the most – as something that’s not just par for the course. I want them to see that it’s fucked and it’s time to start doing something about it.