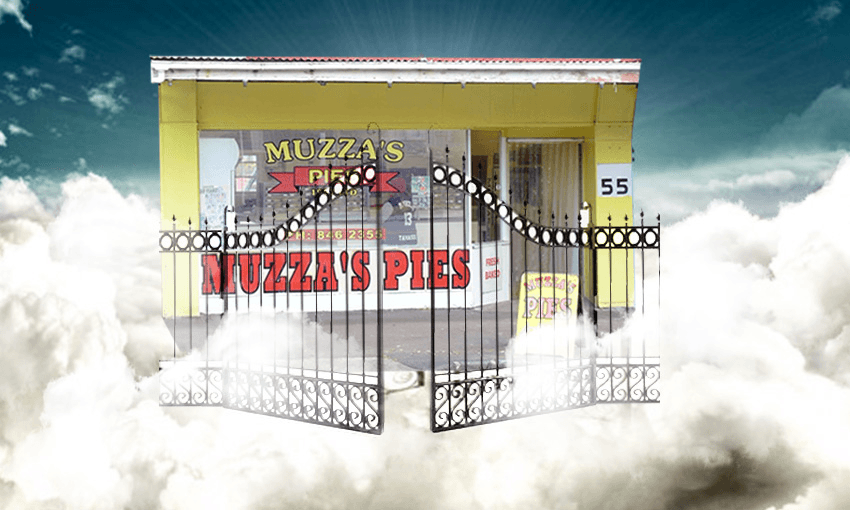 Muzza’s Pies is a beloved Mt Albert institution, responsible for curing a million hangovers. Alex Casey pays tribute to the shop that got her through her teenage years.

We were all perched on the bench outside Muzza’s Pies, a motley group of teenage girls nursing our cheap whiskey hangovers with an urgent IV of warm steak and cheese. Glassy-eyed and still slightly hysterical from a night of rolling around on the floor and learning Pussycat Dolls dance routines, we simply weren’t prepared for what was about to happen next.

Most of us had just hit the rich vein of delicious Tasty cheese magma when the furious man, all ruddy cheeks, Rodd & Gunn shirt and urgent clipboard marched up to us. He asked us a single question, revealing a cartoonish English accent.

“Where is Mount Albert?”

We stared at him in silence, slack-jawed, waiting for a crumb of context.

We turned to each other through crusty half-shut eyes, trying not to laugh.

He repeated the question again, face reddening to an impossible beet.

“Do you mean the mountain?”

The man stormed off with his clipboard, ready to unleash his confusing reign of terror on another group of hungover suburban youths. I still think about that man all the time. Where was he going? Why was he so angry? How could he have been so confused when he was standing not only in the looming shadow of Ōwairaka, but directly outside Mt Albert’s legacy landmark since 1997, Muzza’s Pies.

Touchstones of my youth are scattered all across the suburb of Mt Albert. Me and friends would sneak drinks on the 224 bus, loiter at St Luke’s and sprint through the Richardson Road car wash in the dead of the night. We’d get six onion rings for $1 from Big Boy Takeaways and five horror DVDs for $10 from the Video Ezy. We’d get bubble tea and chicken nibbles from Momotea at 2am and marvel at the busy restaurant, feeling briefly that we lived in a proper city.

Bookending every night of shenanigans was Muzza’s Pies. Muzza’s was there for us after high school sports games and for our mornings squinting through the hangovers brought on by a thousand cans of Envy. My friend Zoe once downloaded a shonky auto-tune app and recorded the great unreleased single ‘I Want a Muzza’s Pie and a Blue Powerade’. When I took my teary mum up Ōwairaka to tell her that I was moving out to live with my boyfriend in – urgh – Ponsonby, we got Muzza’s afterwards.

We urgently need to talk flavours. I enjoy a steak and cheese because I am a simple girl with simple needs. My mum, who full disclosure is also Cathy Casey the local councillor, loves steak and kidney. Her relationship to Muzza’s, like mine, is sprinkled with misty-eyed nostalgia for the creepily tinned, Depression-era Scottish pies of her youth. “I remember eating tinned Fray Bentos steak and kidney pies as a student,” she tells me. “Cheap, easy to heat up in the oven and delicious.”

It was decades later that she rediscovered the joys of ‘S&K’ as she likes to call it, at Muzza’s Pies around the corner. “When I found that I was just in seventh heaven,” she recalls, before decreeing that she will only get another flavour if there is no S&K left and no S&K in the oven. “I remember waiting in line on a Saturday morning and there was only one S&K left and one person ahead of me. I tried ‘The Secret’. It didn’t work. The S&K walked out the door.”

From that hungover bench I messaged one of my friends, world famous comedian Rose Matafeo who I knew remained passionate about Muzza’s Pies despite now living in foggy Londontown. “It’s the thing I miss the most when I’m not in New Zealand. My order was a steak and cheese pie and a can of apple and nectarine Fresh Up from the dairy next door and maybe a sausage roll if I was a hungus.”

Without prompting, she began to explain her passion for S&C in much greater detail.

“The steak isn’t cut into cubes, it’s more of a salty steak stew with very melty beef, and you can tell the cheese they use is real.” Indeed, behind the Muzza’s counter any day from Mon-Sat, you can see the open, honest and transparent folks of Muzza’s Pies making pies from scratch and using bona fide real Tasty cheese. “Those are some of my most treasured memories,” says Rose, “because they were of food and my best friends, and the glue of our friendship is food.”

I reached out to a few other local celebrities who I knew might have a thing or two to say about the pies from Muzza’s fair hand. Colin Mathura-Jeffree likes steak and cheese. Jess Hansell, aka Coco Solid, says that the mince, chilli bean, and sour cream is “pretty bomb”. Other exotic flavours include chicken and apricot, butter chicken, and bacon and egg. Still, I dream of buying a family-sized steak and cheese pie for $16 and eating it in the bath with a cake fork like Marie Antoinette.

The hearty, piping hot, moderately-priced pies are lore in Mt Albert and beyond, yet they seldom appear in any pie awards and mainstream media pie discourse. At this centre of this mystery is the owner, the man I have called Muzza for decades, but whose name is actually John Williams Sr, according to this rare article. When I inquired if he wanted to talk to me for this article, he told me, “I’m a private person and I’m not interested.” Big Muzza energy right there.

In a way, the mystery makes Muzza’s all the more delicious. One step through that thick plastic curtain and you have ascended to pie heaven, alongside a cross-section of tradies, sporty kids, Lululemon mums taking a guilty detour, and dropkicks like me. Hell, I even once saw a parrot order a Muzza’s pie. Join the long line and know that every step closer to the counter is one step closer to you being the person you always dreamed of: a person eating a delicious pie.