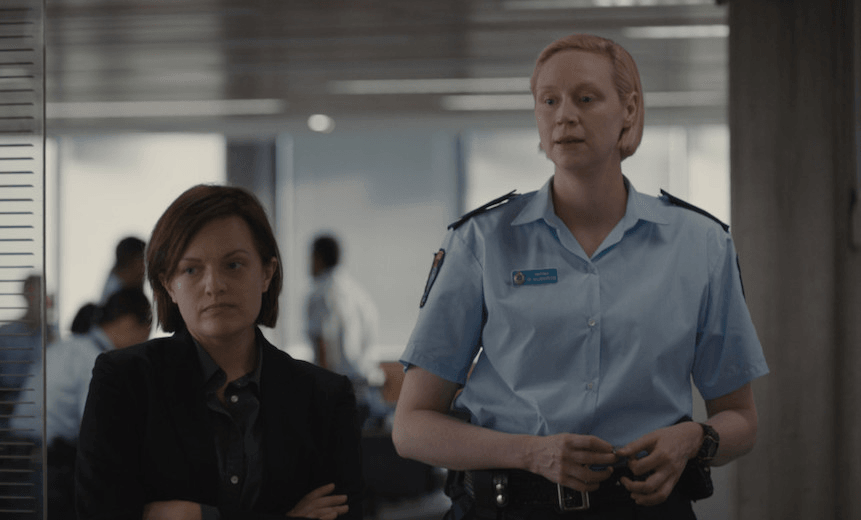 Top of the Lake and high in the mountains: NZFF filmmakers pick their highlights

Philippa Campbell introduces the second series of Jane Campion’s Top of the Lake and Hugh Macdonald gets outdoors in a different way. Part six of our Film Festival filmmaker’s choice series.

Producer Philippa Campbell on Top of the Lake: China Girl and her recommended movie, We Don’t Need a Map

Top of the Lake: China Girl screened at the Cannes Film Festival this year, the first TV series (along with the new Twin Peaks) to be invited to do so. We arrived in Cannes, though, to a controversy about how Netflix and Amazon are undermining the ecosystem of the international feature film business by paying out and walking away from the filmmakers. Still, we were a key part of the virus of television invading the festival and were very graciously received. That was a testament to the esteem in which Jane Campion is held and it was wonderful to be there in her slipstream.

For those of us who have not been Palme D’Or winners or presidents of the jury, and are therefore less practised in the ways of Cannes, there’s a surreal quality to be in official selection. Before the premiere screening, I was hit by waves of anxiety. Would my outfit last the distance from the first call at 9.30am that morning into the evening? (It did.) Did the technicians in charge of projection at the Palais understand what we were saying about the DCP (digital camera package) and there being intervals? (They did.)

Then we sat there in the cinema, alert to every breath of the audience, every person leaving or arriving, hoping like hell the material was satisfying their intense hunger and confounding their critical engagement.

The festival’s publicity machine is extraordinary. It redefines “performance” for an actor, requiring them to work the banks of cameras in photo calls and utterly own that red carpet. And, of course, there are parties where, if you’re at the right one, you get to meet, or at least see, some of your film heroes and heroines up close.

One of my big regrets is that at the Top of the Lake: China Girl screening I didn’t realise Faye Dunaway was sitting, for the entire six hours, just one row behind us. I would have loved to have a fangirl moment with her, but it was great to know she came and she stayed the distance.

So, from a premiere in Cannes to a New Zealand premiere in the NZ International Film Festival, the event which brings our winter alive. As in Cannes, the whole series is screening in one six-hour session (with two breaks), but here the cinemas have much more comfortable seats, way more toilets (important over six hours), easy access to snacks and drinks and no security toting large guns. What could be better?

During the last two years when I’ve spent a lot of time in Australia, indigenous Australian filmmakers have taken an increasingly prominent and vital role in the centre of the culture. The TV series Cleverman was a circuit-breaker in terms of its cultural content, sophisticated storytelling, craft achievement and audience reach.

I remember watching Samson and Delilah at the film festival here in 2008, and through the extraordinary lens of Warwick Thornton a whole world opened up for me, a world that was shot through with pain and held together by fragile love. There is an ache in the film that is unforgettable. Warwick’s latest film We Don’t Need a Map appears to be way more robust, but I’m sure it will have as big an impact as his earlier work. That’s the film currently at the top of my “unmissable” list for this year’s festival.

Director Hugh Macdonald on No Ordinary Sheila and his recommended movie, Mountain

I really want to see Mountain. I grew up at Lake Tekapo, on the edge of the Southern Alps, and it was there, aged eight, that I saw my first motion picture. It was a 16mm print of the Bing Crosby 1945 melodrama The Bells of St Mary’s, screened in the school hall. I can still play the melancholy theme song – complete with Crosby’s best syrupy tones – in my head.

It was then that I decided I wanted to make films. There’s a strong orientation to the landscapes of Aotearoa/New Zealand in many of my films, formed by the mountains of my childhood at Lake Tekapo and broadened by holidays on Banks Peninsula, Stewart Island and in Central Otago.

Mountains also played a big part in the life of Sheila Natusch – tramping, climbing and cycling over them and through them. Her husband Gilbert loved them too, so having their honeymoon at Mt Cook was to be expected – but after that nothing went according to the usual honeymoon scenario, as you’ll see in my film No Ordinary Sheila.

Mountains can be magnificent, and the trailer of Mountain combines stunning footage of dramatic landscapes with orchestral music composed to complement the images to great dramatic and emotional effect. This is something I have always done too with my own films, and one in particular (This is New Zealand) is still remembered for its use of Sibelius’s Karelia Suite. I believe that a film’s soundtrack is as important as the pictures in creating the right atmosphere and enhancing the narrative. This applies just as much to sound effects as to music, and the overall sound design complements the editing tempo and visual rhythms to deliver the moods and emotions I want the audience to experience.

In No Ordinary Sheila I have matched orchestral music by Gareth Farr with Stewart Island land and seascapes, and his piano music with intimate personal moments. There’s also an upbeat theme song composed for the film by Andrew London and performed by his Trio; and the sea shanty ‘Rolling Home’, arranged by Wellington choir leader Julian Raphael and performed by his male voice choir to accompany a montage of sailing ships, passenger vessels, small boats on Stewart Island and the sea in many moods – these all being important to Sheila.

Although I can’t match Sheila for her maritime exploits, like her I have spent most of my life living near Wellington’s south coast, and like her I have often gone into its cold waters to gather kaimoana. The film shows her talking with Māori friends who share her love of the coast and wild foods, which I think will resonate with a lot of viewers.

I made the film because I knew what an inspiring, talented, interesting person Sheila is, both with her love and knowledge of the natural world and getting out in it, and her ability to write about it and draw it in lively, accessible ways. I hope that her enthusiasm and enjoyment will inspire others to get close to nature for good times too – the sort of good times I had growing up at Lake Tekapo and have always had making films about the land and its people.