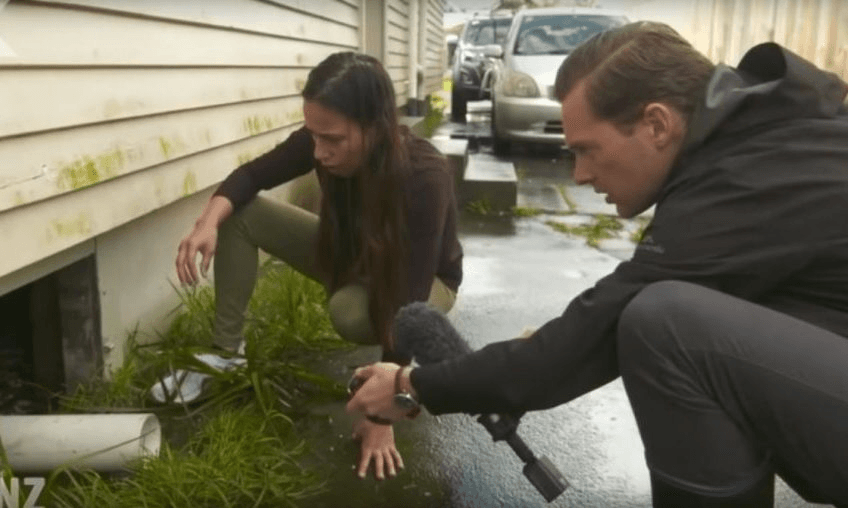 Welcome to the ‘third world swamp house’, Papakura, a snip at $520 a week

Blocked drains, borked stormwater and an ankle-deep swamp under the house, yet the family renting the property in south Auckland feel powerless. The housing minister says it’s an ‘absolute disgrace’ and underscores the need for reform of tenancy rules. Zac Fleming reports for RNZ’s Checkpoint programme.

The Housing Minister has described a Papakura “swamp house” as an “absolute disgrace” and says it’s a perfect example of why he wants to overhaul rental property legislation.

Dawn Robbie lives at the Papakura home with her partner, Cameron, and her two daughters, a three-year-old and 10-month-old – they pay $520 a week in rent.

The house has an incorrectly connected stormwater system and blocked drains, resulting in an ankle-deep swamp underneath the house, and an unusable, flooded yard when it rains.

It has been like that for at least 21 months since Robbie moved in.

“This swamp house is really a textbook study in why we desperately need to overhaul the rules relating to the quality of rental housing in New Zealand,” Twyford said.

“It makes the house damp, cold, and mouldy,” Robbie said. “That’s why my daughter is getting bronchitis at 10 months old, this is the third time she’s had it, and I’ve got strep throat.

“It’s mosquito, rat infested, we’re living in shit, no offence, but that’s literally how it feels.”

The landlord, Aven Raj, would not speak to Checkpoint today.

Raj said he was “busy”, and when asked what he was busy doing, he replied: “I’m doing whatever I want to.”

He told Checkpoint to talk to his lawyer, before hanging up the phone without providing contact details for his lawyer.

The grass in the yard is long and unmown because Robbie said it was too muddy, making it difficult to mow.

“We can’t play on it because it’s a swamp. I have my own pool, my own muddy, chocolaty pool,” Robbie said.

“It’s disgusting, I don’t think any tenants should have to live like this. We can’t go outside.”

She had not moved because she was hopeful Raj would fix the swamp, Robbie said.

“I stay here because it’s not easy for a person who has a dog, two children, and my partner works so much, we can’t just keep picking up every time something bad happens,” she said.

“Does the Tenancy Tribunal think that giving your landlord notices and ask them to fix things, that they’re not going to laugh?

“My landlord laughs at me.”

Auckland Council has visited the property, and Max Wilde, its team manager for compliance response, said cross connections between storm and waste water, like the one at Robbie’s house, were illegal.

Wilde said it was “too early to comment on what actions the council will take”.