It’s easy to romanticise the past, especially when the past you’re remembering is light-years from the current moment. As I read Bus Stops on the Moon: Red Mole Days 1974-1980, an account of a young writer seduced away from his academic career by a travelling theatre troupe promising adventure and freedom, I too dream of street performances, the smell and sound of dusty stage curtains, a community of artists working together. But, as outlined by Martin Edmond, keeping a touring company together when commercial success was never in grasp was no easy feat.

As I read his book I have a hundred tabs open, many of them articles written by performers, dancers and musicians bemoaning the Covid-induced state of inaction. It’s hard not to wonder what Red Mole would be doing now were they still around – because I miss them, because I always knew them to have a solution, to find a way to make work against the most crushing of conditions. Because Red Mole did just keep on going.

Edmond’s book is about his time with the theatre company, but also his journey as an artist. He begins with his frustrations as a 22-year-old university student. Unsatisfied with his academic career, he happens upon a charismatic writer, Alan Brunton, at a party and is invited to write for his new magazine Spleen. From there, Edmond finds himself enmeshed in Red Mole’s unconventional world, joining the company as an actor and beginning to tour.

His narration of their sprawling universe is energetic, exploding with detail from an enviable memory. His feelings towards the Moles are not always positive; there is much gossip about the behind-the-scenes social dynamics that often put a strain on the group’s creative output. (Edmond insists, for example, that the group kept him around due to his relationship to the composer Jan Preston – to me this take seems at odds with their invitations for him to continue collaborating.)

In a beautiful spread of photographs we see Edmond the performer but also Edmond the friend, sharing an intimate conversation with Sally Rodwell – my mother – or as part of a team talk at the dinner table in 1979 (see feature image). Red Mole placed an emphasis on community; it was this that kept them together and creatively active for such a long time. 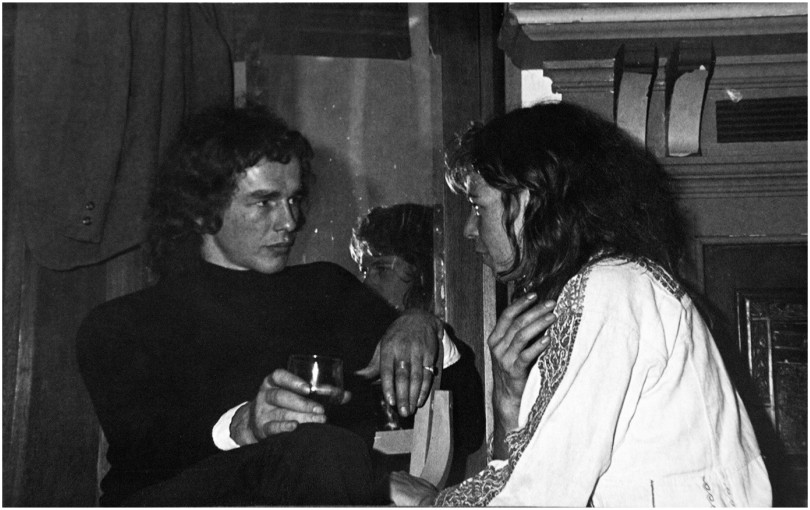 While the stages and audiences may have been seductive, the boiled cabbage dinners and poor lodgings would’ve been a test to anyone’s commitment to the lifestyle. In 1993 my mother made the documentary Zucchini Roma about her life in the theatre. “You keep going on and on. Why?” screams a stranger as my mother carries a suitcase full of theatre props onto a bus. She turns to the camera and says, “To keep the romance alive.”

This line may seem like whimsy, especially when coupled with my mother’s grin, but it is in fact one of the five parts of the Red Mole manifesto, as quoted by Edmond:

to keep [the] romance alive

to preserve the unclear and inexplicit idioms of everyday speech

to abhor the domination of any person over any other person

Edmond relays the origin story. Setting: Luang Prabang, Laos, in an opium den behind a Shell service station. The true details, as he explains, are hazy. “These elements are combined and recombined in various ways in the poems and theatre pieces Alan made about the sojourn in Luang Prabang, and in them it is clear that two paths opened before the travellers, both of which are explored in the writing, but only one of which ‘in reality’ took place.”

This ability to shift reality is part of the romance that must be kept alive; it’s the ability to refuse what is presented to you. As Edmond says in an interview in Sam Neill’s 1979 documentary Red Mole on the Road: “I guess there just came a time when it became apparent there was a choice, that you didn’t have to stick with whatever you were doing at the time, that you didn’t have to invest your personal insecurities in material securities like jobs or possessions or whatever. When it came to me that there was a choice available to me between academic life and joining this group, I joined the group.” This younger Edmond feels at odds with the older narrator of the book. He seems to feel as much a part of the company as anyone else. People came and went from Red Mole, the only permanent fixtures being my parents, who may or may not have been together in the opium den behind a service station in Laos. As my father tells it in Zucchini Roma, “Red Mole has been a collection of bright moments ever since that time. At times it’s been in the middle of the crowd and at times it’s been alone.” He says, “I think in the beginning the idea was to maintain the romance of people being together.”

Edmond’s Red Mole days lasted from 1974 to 1980. I joined Red Mole in 1985, as soon as I was born, if you can say joined when you were actually conscripted. Red Mole officially ended making work in 2006, when my mother passed away. Throughout that time, the circle of collaborators shrank and grew and shrank and grew again. Red Mole was not a formal theatre company, in the sense that they were willing to work with anyone who wanted to take part. It was, in some ways, this openness that caused people to consider them not a serious theatre company. “In this view,” Edmond writes, “Red Mole was a group of amateurs, more or less untrained, who might have had charisma but lacked the necessary gravitas to make significant theatre. As if they were playing dress-ups, perhaps.” That passage referred to the company as it was in 1976 but such criticisms plagued Red Mole for the rest of its existence. This did little to dissuade potential collaborators though – the seduction of community and creation appealed to many. Here’s my father in Zucchini Roma again: “Over the years people would put in two or three years of working with Red Mole and then they’d just vanish, just blow on away, and someone else comes along a couple of days later and says, ‘Hey I’m looking for something to do.’”

I don’t think Red Mole’s intention was ever to be a professional theatre company in the commercial sense. Or at least that never seemed to be the main goal. Writes Edmond: “Something that didn’t concern me then intrigues me now: the master plan. I was never part of the inner circle of Red Mole, never privy to the decision-making.” My parents did of course have grandiose visions of taking the company around the world and becoming known internationally. Dreams which persuaded Edmond and a whole group of other New Zealanders to pack up and take off for the United States. They did play in many significant venues, such as New York’s Theater for the New City, and often received warm reviews. But what they seemed really interested in doing was providing a space for themselves and other untrained artists to experiment, to explore, to shift reality – exactly the opposite of what the current neoliberal world order wants us to do. With increasing emphasis on professionalisation and expertisation in the arts, Red Mole’s mode d’etre was consistently counter-cultural. Their work was always political, both in its content and in its creation.

For Edmond, it “made sense to drift along in the wake of a group of people who seemed to know what they were doing and how to go about it”. He started with the company as an actor and musician and gradually moved into the roles of lighting operator and technical assistant. By 1980 his journey of getting lost was complete. He had found how to be a writer. Over the years Red Mole provided that space for many, and with the organic sense of community without forced commitment, the company went through several seismic shifts. A few years after Edmond left, Deb Hunt, one of the Red Mole inner circle, also moved on (as outlined in the book). She continues to work and tour as a mask maker and puppeteer; seeing her find creative ways to use the virtual space during this quarantine period has given me some idea of what my parents would be doing now.

After Hunt’s departure, the company morphed again, and for a while, only my parents remained. Edmond’s book ends with his last meetings with Red Mole. In 1990 a slightly less-successful tour to Sydney saw him reprise his role as technician. But a duo with such charisma – willing to hold space for anyone who wanted to create – was not going to be left alone long, and Red Mole morphed again.

My clearest memories of Red Mole are not chronicled in Edmond’s book. They start after 1990 when we had come to settle in Wellington and my parents – especially my mother – had grown into their roles as educators, mentors, and community organisers.

“In a personal sense, Sally and Alan were crucial for me, they overlooked my growing up, in loco parentis perhaps: sometimes stern, always encouraging, often funny, invariably tolerant,” Edmond writes. After they passed away, I received similar messages from all over the world, from people of all ages. (In later iterations of the company, my parents began working with immigrant communities in Wellington and formed the multi-lingual Red Mole sub-set Roadworks – many members still work in theatre and performance today.)

On a recent visit to New Zealand, I visited Jeff Henderson at The Audio Foundation. Henderson was part of the younger generation of Moles, and the last collaborator to work with them. He was there for the company’s final tour – in Norway, where they performed to ecstatic audiences. I felt the spirit of Red Mole in The Audio Foundation: a space for artists, both trained and not, to explore, experiment and shift reality. Masks made by my parents hang from the walls. This energy, which also flies off the pages of Edmond’s book, is perhaps exactly what is needed right now as an antidote to the despair of the current moment. As we are forced to pause and reconsider how we want to live our lives – just as Red Mole, and Edmond himself, did constantly throughout their lives and practice – it feels like Edmond’s book has come at just the right time.