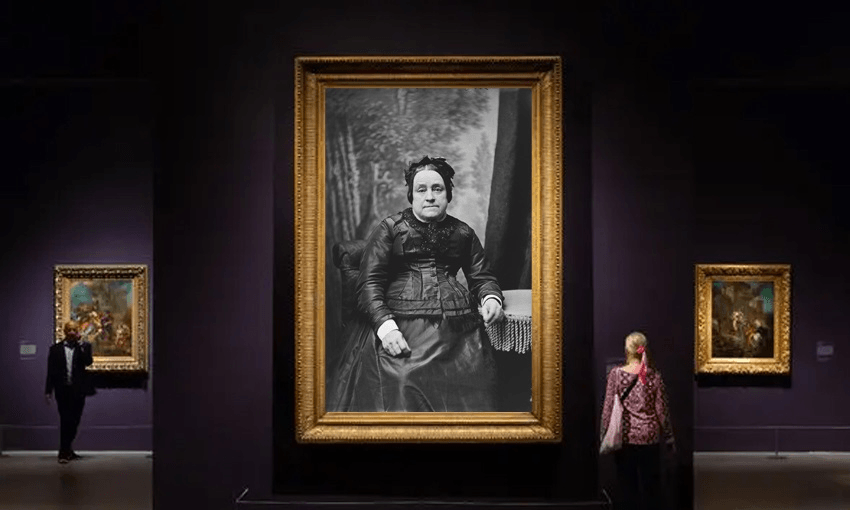 Where are the women in the Business Hall of Fame?

Summer reissue: The lack of female faces in the hallowed halls has been put down to their traditional roles in our colonial society. Now the digitisation of historical records is blowing that theory out of the water.

There are 171 people in the New Zealand Business Hall of Fame. Just 15 of them are women.

It’s an eyebrow-raising statistic, given educational non-profit Young Enterprise established the Hall of Fame in 1994 to inspire the next generation of business people by celebrating those who have gone before. New Zealand business greats both living and dead have since been honoured, and no-one could argue that people like chief hobbit Peter Jackson, Fletcher Construction founder James Fletcher, and visionary infrastructure investor Lloyd Morrison don’t deserve a place in the gallery.

Yet the hall has been slow to hang images of the female half of our business heritage. It wasn’t until 1998 that it admitted its first female laureate, Princess Te Puea Herangi (1883-1952). Certainly, the granddaughter of the first Māori king, campaigner against conscription during World War I and pivotal Kīngitanga leader was a strong first choice. But in the following 10 years only three more women were recognised – Amy Hellaby who ran the family meat company R&W Hellaby in the early 20th century, educational publisher and Rich Lister Wendy Pye, and 19th-century Lebanese immigrant Shariffe Coory who ran a prosperous trading business in Dunedin.

Since then things have gathered pace with another 11 woman laureates admitted, including a record three in 2017 – Wanganui Seafoods founder Pam Williams, director and Māori business development leader Mavis Mullins, and co-founder of the Hynds manufacturing group Leonie Hynds. But it’s still a paltry tally of female achievement.

Not to put too fine a point on it, but the pages of New Zealand history are dominated by white blokes, and the argument has always been that it’s difficult to identify business women whose efforts would warrant inclusion. The Business Hall of Fame also operates on a nomination system, so unless candidates are brought to its attention it does not research them.

It depends on where you look, it would appear. A new book by academic and author Catherine Bishop is turning the idea that the ‘business woman’ is a late 20th-century phenomenon on its head. Women Mean Business tells the stories of no less than 600 colonial-era New Zealand women who set up enterprises in industries from millinery, hotel keeping and travelling showmanship through to New Zealand’s first registered female chemist (Christchurch’s Elizabeth Robinson, who in 1881 became the first woman accredited as a pharmacist because she had run the family chemist shop since her husband’s death 10 years earlier).

Bishop concedes tracking these women down was a painstaking exercise because there are few records of their business activities. She trawled old trade directories which listed proprietors by initial, and cross-referenced them with newspaper advertisements of the day which often revealed their sex. It emerged around 20% of the enterprises were run by women, either alone or in partnership with their husbands. “Mrs Langford begs to inform her Friends and the Ladies of Auckland and its vicinity that she has removed to Shortland Street, opposite to Mr Watt’s where she has a Choice Assortment of straw and Tuscan bonnets, ribbons, fancy goods, &c,” bonnet maker Harriet Langford advertised in the New Zealander in 1848.

The digitisation of resources like Papers Past, births, deaths and marriage records, and the huge popularity of genealogy sites has blown the area wide open, Bishop says. “It’s piecing all that stuff together. It means I can do things that historians 10 years ago couldn’t.”

That presents an opportunity for the Business Hall of Fame, she says. Huge numbers of business women were operating in the 19th century. “Whenever I go and check something on Papers Past now about one business woman I fall over another one that I haven’t got in my book.”

It depends what the Hall of Fame wants to celebrate, she says. While a number of the laureates established businesses that endured into the 20th century, many of the women in her book ran businesses as a means of survival and did so for years. Nelson butcher Ann Bird is a case in point and someone who should be considered, Bishop believes.

Ann was a Nelson identity, often remembered as ‘the first white woman to step ashore’ in the town in 1842. She ran the landmark family butchery business for 40 years after her husband Reuben died in 1850. Her sons joined her in the business, but Ann was in charge until her death in 1891.

Women weren’t expected to be ambitious in the 19th century and so it’s hard to tell when they were displaying business aspirations, Bishop says. “A lot of the rhetoric is framed around necessity, you know, it’s respectable for a woman to go into business as long as it’s kind of necessary.

“Ann could have retired much earlier and handed it over to her sons, but she didn’t, which makes you think she enjoyed what she was doing or at least found some sort of ambition and she wanted it to do well.”

Another figure Bishop has enjoyed bringing to light is Wellington draper Elizabeth Cowles. Elizabeth ran an enterprising fancy goods business on Lambton Quay for 20 years in the late 1880s, and prospered enough to buy a large property in Petone where she later rented out rooms. She was a suffragette and supporter of the temperance movement, and the year after women gained the vote was elected to the Wellington Licensing Committee. Yet despite her public profile, there was no newspaper obituary on her death in 1903. “She’s a spinster, she’s just forgotten. And there are lots of examples like that,” Bishop says.

Hall of Fame selection panel chair Sir Eion Edgar is a laureate himself for his long career in stockbroking. He’s looking forward to reading Bishop’s book, he says. “We’re desperate for as many recommendations as we can get so we can do the research.” He says Ann Bird sounds like a perfect example, and even though her butchery enterprise didn’t extend beyond Nelson that wasn’t unusual for the times. “If they did well and created something then they’re obviously a strong contender.”

Finding details about those early pioneers is hard, he says. For example, there was little in the public domain about laureate Annie Millar who founded the Invercargill business that became Quality Bakers despite an alcoholic husband. “We tracked down some great-grandchildren, and they tracked down a private family book.”

Anyone can nominate someone for the Hall of Fame, and they’d love people to come forward with more candidates, Edgar says.

Bishop would like to claim the figures in her book as feminist career women, but they aren’t. For most, running a business was a means of survival. There was no social welfare, fortunes were gained and lost easily in the 19th century, and the law was stacked against women, particularly married ones. The principle of ‘coverture’ meant that when a woman got married she disappeared as a legal person, so technically she couldn’t make contracts, take on debt or even chase someone who owed her money without her husband co-signing everything and turning up to court with her. “So if your husband disappeared off for a while you were kind of completely stuffed,” Bishop says.

The value in knowing the stories of these pioneers is that we can’t ever say a woman’s place is traditionally in the home, because they’ve always been out doing it for themselves. “That idea of a woman as a housewife and mother and [that being] her sole thing to do was a very class-based thing then, and it was never really true.”

It also provides alternative role models for today’s young women. When she was growing up, her mother’s generation were teachers and nurses until they got married, Bishop says.

“Then for me, it was like, ‘oh radical, new generation, we can do all these things’. You feel like you’re breaking bounds. Whereas I think girls should be brought up to think, well, not only can you do anything, you always have done anything and you have a perfect right to be there.”