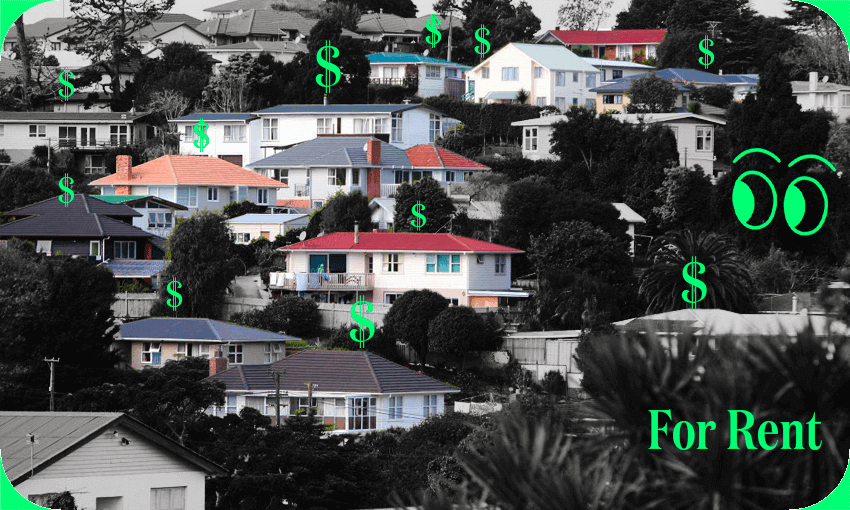 Is the rental market finally good for renters?

Average weekly rents may have jumped over the last year but the recent property market slowdown has struggling vendors looking to tenants for relief. The flow-on effect puts renters in the box seat.

For the last three months, Auckland renter Lucy Whitelock-Bell has kept an eye on the Trade Me advert for her old home. Her former three-bedroom flat, the upper section of a two-storey bungalow in the Auckland suburb of Kingsland, was “tiny” for $750 a week, the water resources engineer says. It felt like living in an overpriced two-bedroom apartment. “It was fine for two people, it was not workable for three people. Then, when the pandemic happened, at least one of us would have to do lockdown somewhere else. You couldn’t have all three in the house.”

Market rents of comparable Kingsland properties range from $480 a week to $529 at most. Before they moved out, Whitelock-Bell and her flatmates were offered another year, at $765 a week, on their fixed-term lease. The previous year, the rent had risen $10, to $750. The flatmates declined to renew and as soon as the property was listed online, the price dropped to $760 – “a slap in the face”, as Whitelock-Bell describes it. It’s now listed at $690.

Barfoot & Thompson director Kiri Barfoot sees parallels with a rental of hers, a two-bedroom unit in St Heliers that, at $500 a week a year ago, had people “all over it”. So far in 2022, though, only one person has inquired about it, she says with a laugh, “and that’s after the property manager made a few phone calls”. Typically, landlords will raise the rent $10 to $20 as they search for new tenants. But Barfoot hasn’t changed the price, “which is unusual”.

Rentals priced at around $600 a week are staying vacant, her property manager tells her, and landlords are having to decrease the rent by the same amount they would usually increase. The Auckland real estate company manages about 17,000 rentals; nearly 500 are available. “It’s not massive, it’s not like there are empty houses all over Auckland,” Barfoot says, “but it’s definitely slightly higher than it would’ve been a year ago.”

A slowing housing market could well be contributing to the increase in rental stocks. The most recent property report from the Real Estate Institute of New Zealand (REINZ) noted sales continued to slow down in April, while price growth was “moderate” and more housing stock was lingering on the market. Challenges with supply have switched to the demand side – first-home buyers and investors are encountering stricter lending criteria and tighter loan-to-valuation ratios, coupled with rising interest rates and inflation, said REINZ chief executive Jen Baird in the report. Fewer people were attending open homes and auction rooms; fewer buyers were making inquiries.

Vendors struggling to sell either persist, but with softer expectations, or turn to the rental market. According to recent Trade Me Property figures, Wellington and Auckland are outliers when nationally, fewer rentals are coming to market in 2022 compared with last year. Across Aotearoa, the number of rental properties available in April dropped 1%; in March, it fell 6% year-on-year. Yet the capital city is bucking that trend – availability jumped more than a quarter in April 2022, compared with April 2021, and 7% in March this year. Auckland’s supply year-on-year rose 5% and 2% in April and March respectively. Trade Me Property sales director Gavin Lloyd said in a press release accompanying the figures: “If we continue to see market activity slow down, we may also see some price relief too.”

Weekly rents are already at record-breaking levels – but they are starting to ease. The national median for April rose to an unprecedented $580 a week, Trade Me’s rental price index noted, the second consecutive month that rents jumped 7% year on year. That’s meant tenants are paying $40 more a week than they were a year ago, Lloyd said. In Auckland, the average weekly rent may have topped $600 but, compared with March, it marked a slight drop of $10 a week. Similarly in Wellington, rent reached $625 but it fell 2% when compared with the previous month.

Because of a glut in supply in Wellington, studios and one-bedroom apartments in the CBD have dropped to under $400 a week – a price “unheard of” before the pandemic, says Harrison Vaughan, managing director of property management company Tommy’s. In mid-May, it saw the most active rental listings ever on Trade Me at just under 1,000 (it’s now over 1,450). Usually, the market holds 400 properties at most for mid-autumn, and the increase is giving renters “plenty of choice” for the first time in years. Vaughan believes the rental market is at the start of a “major turning point” and landlords might need to start marketing themselves to stand out. “Throw in some whiteware, maybe a free week’s rent, or even offer to contribute towards moving costs,” he says.

Barfoot says rent relief in Tāmaki Makaurau has really only materialised within the last month after a year when average weekly rents across Barfoot & Thompson’s rental portfolio had risen 3% in most suburbs. Described as a “slight rebound” off the back of two years of rent freezes or sluggish increases, plus the expected increase in operating costs, the trend hides monthly fluctuations – due to the absence of incoming overseas students and migrants, inner-city Auckland apartments are going for nearly half the price they typically would’ve attracted before the pandemic, while two-bedroom new-builds are usually in hot demand and are more expensive than older two-bedroom places.

Through feedback loops, Barfoot is hearing that tenants are becoming more price-sensitive, which isn’t surprising. “The cost of living has gone out of control, inflation is super high, petrol has gone up, a block of cheese has gone up,” she says. Most landlords would have to up rent by $100 to $200 a week to break even, but “you’re not going to get any tenants if you do that”. Conversely, if renters can save $20 a week on rent, “they will”. Winter has officially arrived; the appetite to shift properties drops in the cooler months, meaning less competition. If tenants want somewhere nicer for the same amount of money or slightly less, then now is a good time to look, Barfoot says. Upward and downward forces are working in their favour.

That the market is starting to shift the way of tenants has been “weird” to witness, says Whitelock-Bell, the water resources engineer. Transactions have largely been one-way during her years of renting, with tenants taking whatever they could get. Now, they can expect good-quality flats following the introduction of minimum “healthy home” standards in 2019. But the power imbalance between landlords and renters is “ingrained”. She says it’s a struggle her flatmates faced at their last place and could still encounter should problems arise with their current place. But at least it is “normal-sized”, costing relatively the same as their previous home. “We’re lucky.”