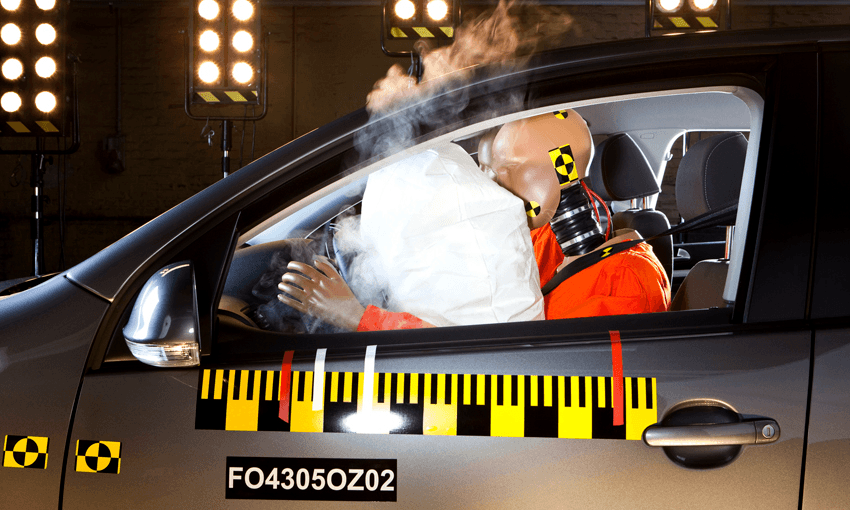 An airbag deploying during a crash test (Photo: Getty)

An airbag deploying during a crash test (Photo: Getty)

Welcome to the Cheat Sheet, a clickable, shareable, bite-sized FAQ on the news of the moment. Today, it’s all about the government’s compulsory recall of Takata airbags.

This article was published in April 2018

Remind me, what’s being recalled again?

Airbags. More specifically, airbags manufactured by the Japanese company Takata. A fault was discovered in the company’s ‘Alpha’ type airbags back in 2013 and a voluntary global recall’s been in place ever since.

Because the government announced yesterday that the recall was now a compulsory one. It’s just the second-ever compulsory recall issued by the New Zealand government, so it’s a pretty big deal.

That is a big deal. So what’s the issue with them anyway?

They’re a safety risk. According to Consumer NZ, the airbag inflator can be adversely affected by moisture, meaning there’s a chance the inflator could deploy with explosive force if the car crashes. Worst case scenario, they’ll send metal shards flying into the passenger cabin.

That’s terrifying. So how many vehicles are they saying might be affected?

The compulsory recall encompasses more than 50,000 vehicles in New Zealand. The majority of affected vehicles – a little under 46,000 – are used imported vehicles.

Why didn’t they issue a compulsory recall sooner? And why now?

Compulsory recalls are pretty rare. Most recalls are voluntary, which means the manufacturer issues them. This compulsory recall will be led by the Ministry of Business, Innovation and Enterprise (MBIE) and the remaining 50,000 vehicles will need to be repaired by 2019.

The recall is now compulsory because the voluntary recall was progressing too slowly. Since 2013, just 29,000 airbags have been replaced – less than a quarter of those affected in New Zealand. Consumer affairs minister Kris Faafoi said yesterday that “while I’ve been reassured by officials that the risk in New Zealand is comparably low – airbags are more of a concern in humid countries with extremes of temperature – I am not willing to allow any risk to remain while we can remove it.”

It also comes on the back of Australia’s compulsory recall issued in February which affected more than two million vehicles. Faafoi said he was “surprised to find there was no government-held information on the scale of the problem in New Zealand, nor on possible remedies”. As a result, it’s taken four weeks for the government to quantify the size of the problem.

So, have there been any incidents in New Zealand so far?

No fatalities or injuries have been reported here. But worldwide, faulty Takata airbags have caused at least 23 deaths and more than 230 injuries.

What sort of cars does this recall affect? How do I know if my car is safe or not?

You can see if your vehicle is affected on the following sites:

If your vehicle isn’t listed as an active recall, it’s important to still check again in the future.

If your vehicle’s affected, your supplier will contact you, which may have already happened. They’ll arrange a free replacement of the airbag when it initiates recall action for your vehicle. Free means you won’t have to pay for replacement parts or labour.

Remember, it isn’t just cheap or Japanese vehicles that are affected. The list also includes most European manufacturers and luxury models from brands such as Ferrari and Jaguar.

It’s important to note that while the recall is compulsory for the industry, it’ll still be up to the individual to take their vehicle in to be repaired (remember, vehicle owners won’t be required to foot the bill).