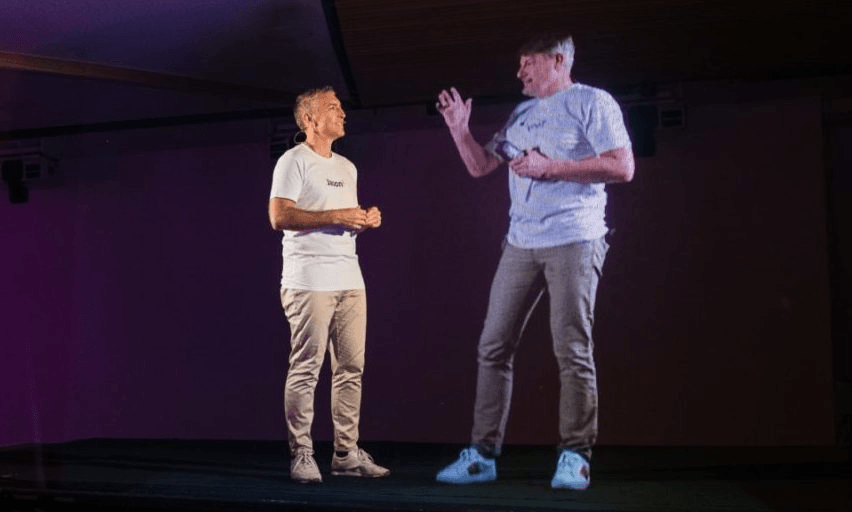 Cheat sheet: Vodafone steals a march on rivals with 5G by end of year

Vodafone just announced that they’ll be flicking on the new generation of mobile signal in four centres before the end of the year. Hold the phone.

In an all singing, all dancing, all hologramming extravaganza at its Auckland HQ, Vodafone announced that it will be switching on a 5G network in December in Auckland, Wellington, Christchurch and Queenstown. It all promises, said CEO Jason Paris, “a transformational shift that will drive a digital revolution and make New Zealanders’ lives and businesses better, smarter and more productive”.

Fifth generation cellular network technology. It operates by sending “multiple beams”, compared with the cruder, wider, one-way beams of 4G ,to be a whole lot more efficient and potentially much, much faster – as much as 100 times faster. Its roll-out has begun in various parts of the world including the UK and the US, but it’s still very much early days.

I don’t have any burning need to project holograms. Does 5G offer anything to a typical user?

Its core functions, at least at first, will be for businesses or emergency services or hard-out gamers, and there’s some scepticism about its usefulness for ordinary punters in the early days. Over time, however, it’s likely to become the norm, whether that’s in slashing the speed of downloading high-definition video, replacing home wireless, the much-feted worlds of wearables and the “internet of things” or helping your car drive you places.

Does my current phone support 5G?

Almost certainly not. Unless you’re a super early adopter with a flash new Android such as a Samsung S10 + 5G. There’s no iPhone for 5G yet, though they’re coming next year.

Will it cost more?

Not at first, says Vodafone.

What does that mean?

It means yes, after a bit.

Hold on, didn’t Vodafone say it was in no hurry with 5G?

Yup – this marks a switch in strategy, and the announcement last Thursday to staff, businesses and media also signalled something of a reinvention of the company as a whole.

It came on the same day that the new owners, New Zealand infrastructure investors Infratil and Canadian company Brookfield, formally took charge of the company they bought for $3.4bn, and which is now essentially independent from the British company from which it takes its name.

After a bumpy few years that saw an attempt to merge with Sky TV stymied and a sharemarket float aborted, this was an attempt to demonstrate a bold new dawn, complete with Paris, who arrived from rival telco Spark just over a year ago, in a T-shirt and sneakers.

Speaking of: where is Spark at on 5G?

It’s trialling 5G, and has its hearts set on getting under way by the middle of next year. But Spark faces two challenges in a commercial roll-out: the GCSB’s misgivings about the Chinese company Huawei, who would be providing the kit, and the need to get hold of the spectrum band required for 5G, especially given that the wait for the government to launch fresh spectrum auctions, which face iwi claims. (Two Degrees has indicated it’s in no rush.)

Don’t those issues affect Vodafone too?

Its equipment providers are Nokia. And it’s launching on a 3.5GHZ spectrum the company already owns.

But it is going to interrupt the weather forecasters, right?

Also no. Not at this frequency.

Shouldn’t Vodafone focus on sorting out their customer service issues?

Please hold the line and we’ll get to your query as soon as possible.

CEO Paris accepted that service had been lacking, and said that’s now priority No 1.

An earlier version of this post incorrectly identified Dunedin as a launch city, rather than Queenstown. Sorry, Dunedin.