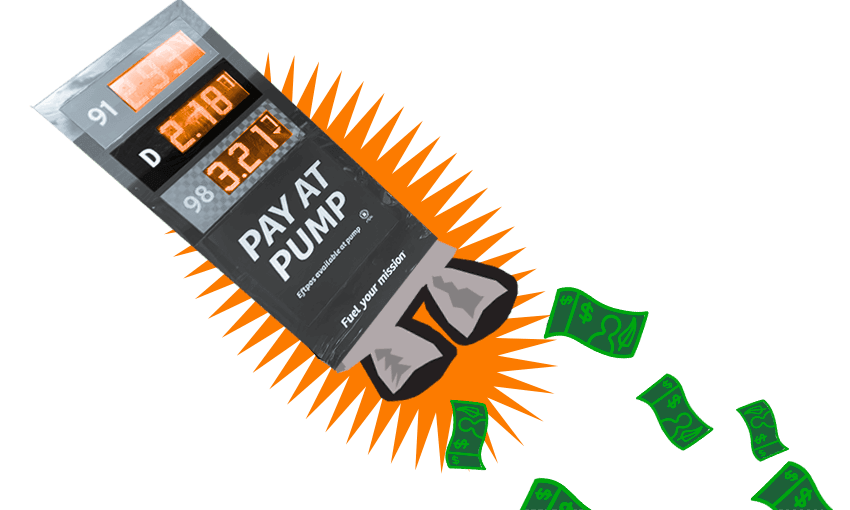 Think $3 a litre is rough? Petrol prices will only get higher, warns the AA

If you’re finding your petrol budget is spread a little thin lately, you’re not the only one. According to an expert, it’s only going to get worse. So what’s the answer?

“When’s the last time you checked your tyre pressure?” Terry Collins is on the phone, and petrol-saving tips are coming at me faster than a Formula 1 rally car. “If you’re running around with your golf clubs or you’ve got roof racks on, that’s all creating weight and resistance. That’s chewing through your gas,” he says.

The AA’s principal advisor for motoring policy isn’t done there. “If your car’s … well maintained, you’ve got the correct tyre pressure, you’re driving smoothly, you’ve got no roof racks on it, you keep your car empty apart from people and what you need to carry at the time, collectively you can save nearly 20% of your fuel bill.”

It may not sound like a lot, but right now, a 20% saving in petrol costs would make a massive difference to everyone who drives a non-electric car. I’ve called Terry because petrol prices have reached record amounts. It started last Thursday morning when, at a Z station a short distance from my house, the cost of 95 was $3.03 a litre. That evening, it had risen to $3.13.

By Friday, it had risen even higher, with the cost of 91 also hitting the $3 a litre mark. That’s the moment it made me gasp. It also shocked The Spinoff’s resident petrol authority Stewart Sowman-Lund . “I dread to think how bad things could get,” he wrote in a Friday news update. National MP Simeon Brown agreed, calling on the government to repeal Auckland’s 10c per litre regional tax.

Gasps are appropriate, says Collins, who was stunned to see a Miramar petrol station in Wellington charging $3.18 for 91 just last weekend. “I remember when it got to $2, then $2.50,” he says, recalling the “oh no!” outcry from motorists back then. “Three is a psychological number.”

He believes $3 is the tipping point that will force many families to change their travel habits. “For day-to-day trips, getting groceries, work, church, there’s very little option but to travel,” he says. “It’ll be the other trips, ‘I’ll pop down to the beach,’ that might disappear.”

But it’s not stopping at $3. Collins says the following months will see petrol prices climb even higher. “In the next month we’re going to pay record prices,” he says. “It wouldn’t surprise me to see 98 at $3.50 at some point this year. Who knows?”

What’s the problem? “The wild card is this eastern European conflict,” says Collins. Some of the world’s oil supplies comes from Russia, and war is causing chaos with the global supply chain. When he checked the price per barrel recently, he was stunned. “[The cost of] crude went up 9% in a day – just a single day,” he says.

That’s not the only issue affecting prices. Companies like Gull or Shell buy crude oil on a fluctuating world market, then pay to get it shipped here. Local taxes and levies are added on top: GST, ACC, and emissions-trading levies. “Almost 70 cents per litre is collected by the government in fixed excise and an additional 10 cents per litre in Auckland for the Auckland Regional Fuel tax,” says a Z spokesperson. “Customers pay 15% GST on top of everything.” In total, Z says it makes “about 4c per litre profit”.

With all of that, you’d think motorists might be looking at other options. But Collins says it’s not as simple for most as going out and buying an electric car on a whim. “People can’t decide, ‘Oh, it’s $3 at the pump today, OK, today’s Thursday, on Monday I’ll go out and buy a new car. It doesn’t work like that.”

Instead, those finding their weekly petrol budget no longer cuts it have to cut costs elsewhere. “I think what happens with a lot of households is they’ve got a budget, ‘I put $50 in a week, and that’s it’,” he says. “If they’ve got a tight budget, they’re reducing their travel or they’re having to make some concessions somewhere else.”

For those that can afford to upgrade to electric, there are other issues. “You’ve got to wait months for an efficient vehicle thanks to supply chain issues,” says Collins. He doesn’t believe the battery range or infrastructure is quite there to support a large electric-driven fleet of cars in the country, but it will soon. “They’ll be a lot better car in three years than what they are today,” he suggests.

So what’s the answer? Collins says he uses public transport, and walks a lot. If he has to use his car, he includes multiple stops to keep his engine warm and maximise fuel efficiency. You guessed it, he’s off reciting his fuel-saving mantra again: “Drive smoothly, don’t accelerate hard, have the right tyre pressure, keep the weight down …”