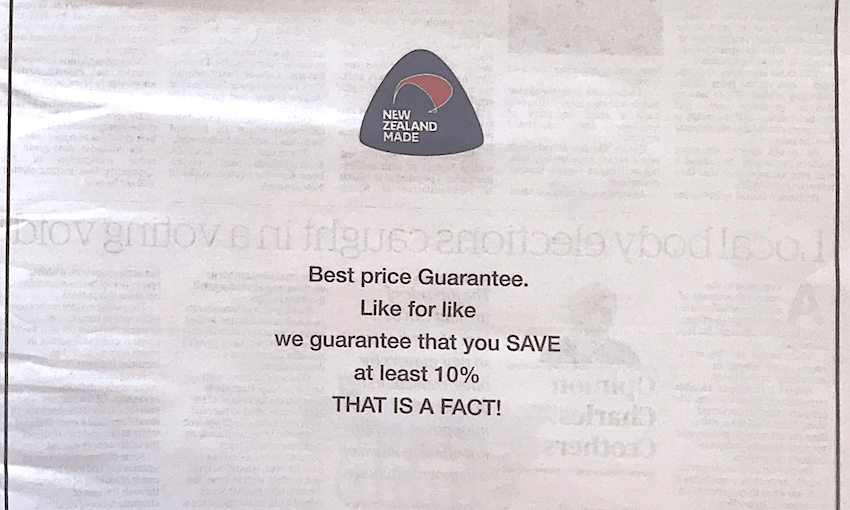 The story behind New Zealand’s most bizarre print ad

For weeks, Carpet Mill has been running a very strange full page in a national newspaper. Duncan Greive investigates.

At first glance, you barely notice it. A large, mostly empty page in a newspaper. A scattering of text, some logos, enough so you don’t immediately clock anything amiss. Only, there’s something off about it. There are a range of basic design conventions adhered to by just about everybody. Not just nowadays, but since, like, the Gutenberg press. And probably before. Elements line up. There is a style guide of some description operating. Typefaces are chosen deliberately. Logos placed with some logic. Even on an epic catalogue from Chemist Warehouse, or information-saturated Gold House ad begging for your Rolexes, some very basic rules apply.

There’s so much going on, and yet so little. The Carpet Mill logo is probably the most ordinary thing. Perched in the top right-hand corner. Reasonably close to equidistant from the top and right. Nothing much to see here.

Next is where it starts to drift away from its moorings. “Bespoke, Durable, Sustainable, Carpet”. Four words which, on their own, do a great job of capturing what’s going on at the Mill. Yet why are they in title case? Why are they so close to the edge? And why is there a comma before carpet?

The next two elements are logos for Consumer and New Zealand Made, again just floating in the ad’s vast expanses of white space, untethered to anything, a splash of colour and the authority of two long-established and trusted organisations. Good. I mean, not good. But fine, sure.

Then, it really kicks off. A five line retail poem, which briefly threatens a haiku before abandoning structure entirely. It’s worth just gazing upon it.

Best price Guarantee
Like for like
We guarantee that you SAVE
at least 10%
THAT IS A FACT!

Not really a lot you can say about that. Then, aside from some startlingly normal contact information, this wild ride is over.

It ran in the Sunday Star-Times, Stuff’s flagship national Sunday newspaper, the two previous weeks (today, I scrambled through my slightly damp copy in excitement, but found nothing there). It may have run for longer, I am a very recent subscriber.

Advertising is in a strange place right now. The old rules don’t seem to apply. Mike Pero advertises rental properties on television, during The AM Show. Air New Zealand barely has to make a media buy, such is the blanket coverage their every move gets. Nothing makes sense anymore.

Still, this advertisement felt like it broke multiple walls. I wanted to know more, to know whether I was missing something – some grand auteur’s design touch. I asked my friend Simon Chesterman, responsible for the gorgeous RugbyPass aesthetic, and veteran of campaign work for the likes of 42 Below, what he thought. This is his reply, in full:

“It’s difficult to offer design critique on something so resolutely un-designed – but as far as an advertisement goes, the chaotic minimalism claimed my attention by being so unlike everything else in the paper and it’s consistent with the no-frills promise of the company. I’d say it’s a winner on those two fronts – but it doesn’t really make me want to buy their carpet so I’m not sure it’s totally successful?”

There was only one thing left to do. I called and emailed Carpet Mill seeking comment, and, two days later, received this reply from the company’s GM.

Multiple requests for further comment have met with no response. Which bums me out. I hope he doesn’t think I’m making fun of him.

I hope this piece doesn’t read that way. I have thought about the ad more than any other this year. I have gone back and forth over whether it’s lunacy or genius. And I think I’m with Michael, settling on the latter.

It says, to me, that Carpet Mill stands by the quality of its carpet, and that others, like Consumer, do too. It also says that its prices are incredibly aggressive. Like, take a step back mate, you’re spitting on me a bit when you talk-type aggressive. But still – good value.

More than anything else, it oozes confidence in its whole business. When sold a series of ads by some sharp salesperson at Stuff, rather than panicking about who would make them, and what they would cost, they took matters into their own hands.

This isn’t self-consciously low budget advertising, a la Pak N Save, meant to convey that they’re passing on what they save on big campaigns to you, the customer. No, not low budget – literally no-budget.

They made it themselves. Took a few steps back, eyeballed it and said ‘yep, good to go’. It conveys so much about the self-assurance of Carpet Mill as an operation. At least to me it does. If there are enough others out there like me, then Michael can rest easy and watch the orders pile up.