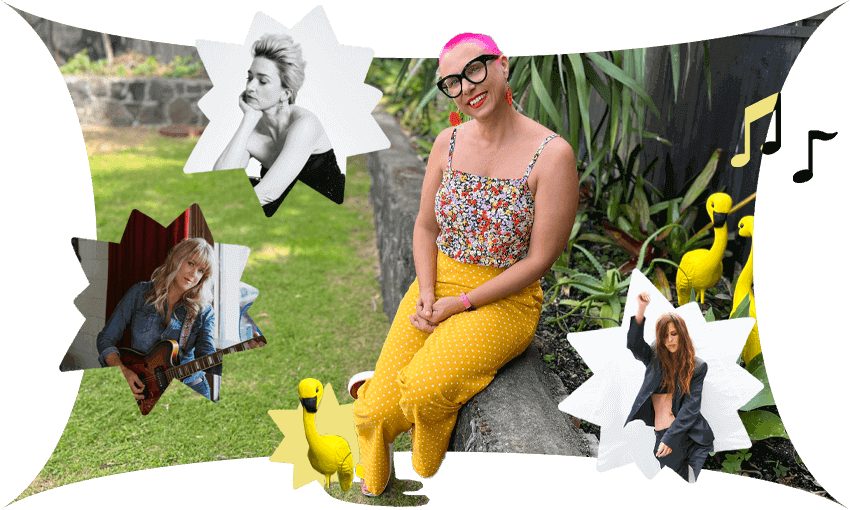 Janine Russell is opening her backyard up for shows by Dianne Swann, Julia Deans and Reb Fountain. Image: Tina Tiller

BYO pillows: Inside the intimate gigs keeping artists afloat during an omicron surge

Janine Russell is opening her backyard up for shows by Dianne Swann, Julia Deans and Reb Fountain. Image: Tina Tiller

A small suburban backyard will play host to an all-female line-up of acts in a series of Covid-friendly gigs over the coming weeks.

When Janine Russell left her job last week, she found herself with excess spare time on her hands. “I’m not very good at relaxing,” she says. “My brain is like a hamster wheel most of the time.”

Lunching with friends in the sunny backyard of her Mt Albert home one day, a guitar came out and an impromptu performance was held by two local artists. “After a few bubbles, a couple of them sung for us. They said they loved that.”

It made Russell wonder: could she sell tickets for a series of small gigs just like that one? With a background in music publicity, with plenty of artists among her friends, she knows first-hand what Covid-19 lockdowns over the past two years have done to their careers.

With 100-person limits canning major concerts for the foreseeable future, and funding options limited during alert level red, many are struggling to make ends meet.

More than that, they’re craving being in front of crowds again. “I know they really miss performing,” says Russell, who has worked as a music manager at Universal NZ and helped promote festivals like the Big Day Out. “A lot of these artists have new music that they haven’t been able to perform for audiences. That’s the big thing.”

Russell asked her friend, veteran TV producer Irene Gardiner, if a small series of intimate gigs might help a selection of artists through this difficult time. Gardiner’s also seen the industry’s struggles first-hand, and she’d had the same thought. “I’d been thinking [about] home gigs,” she says.

In the space of a few short days, Songbirds in Suburbia was born. From March 19, three intimate shows will be hosted in Russell’s Mt Albert backyard, with Fur Patrol’s Julia Deans performing on March 19, and singer-songwriters Dianne Swann on March 27 and Reb Fountain on March 31.

Guests will be nestled into a grassy suburban garden, surrounded by a small PA system and a lot of fairy lights, with a glass of Prosecco in their hands. It’s BYO pillows, snacks and picnic blankets, and Russell promises her washing won’t be hanging on the line.

“I’ve got a little concrete wall people can sit on, there’s decking and steps, there’s the lawn,” says Russell. “People can find a spot to sit in. The only rule is, ‘Tall people at the back.'”

For the $100 ticket price, a small group of 30 fans will receive an evening concert experience like no other. They’ll be closer to artists than at a normal show, and will be able to ask questions and request songs. Yes, that ticket price is higher than a normal show, but Gardiner says she and Russell won’t take a cut, with 100% of proceeds going towards the performers. “It’s going to help our three artists at a really rotten time,” she says.

It didn’t take much to persuade the artists to take part, says Russell. With word already spreading, she’s receiving requests from other artists keen to take part if the series continues. “There’s a little bit of a queue forming of wahine who want in on this,” she says.

Gardiner even knows of one male artist “trying to muscle in”. Russell’s reply? “It’s not ‘Bros in Suburbia’.”

Ticket sales are speeding up too, with just a handful of spots left for each show. Russell’s using the rest of her downtime making Excel spreadsheets of guests, and making sure her backyard’s spotless and her toilet’s clean and ready for more than 30 people to use her facilities

A famed organiser, she’s already got a QR code set up, and says vaccine passes will be checked and masks and social distancing measures in place. Aside from that, the most important thing’s already taken care of: getting her neighbours on board. “You go for it,” one told Russell. “I’m just going to sit back in my yard and listen.”

To book a ticket for Songbirds in Suburbia, email songbirdsinsuburbia@gmail.com.