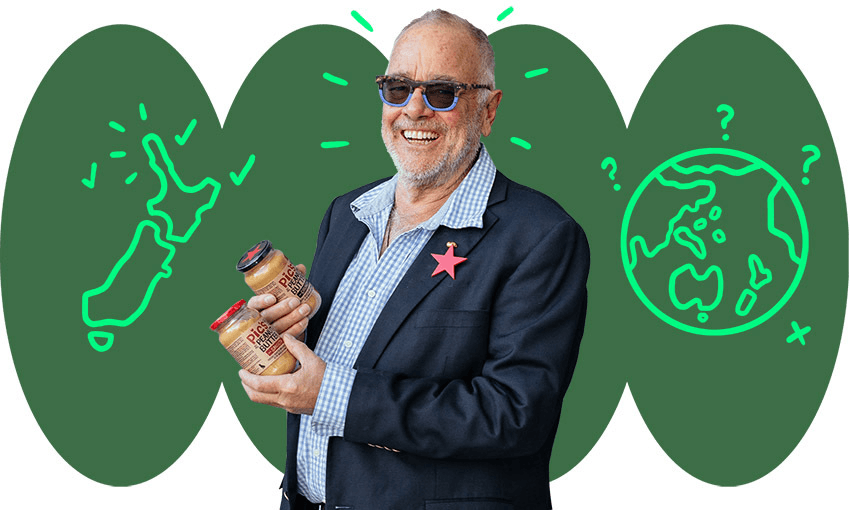 Pic’s spends $10 million a year on peanuts grown overseas. Its founder hopes to one day be able to spend some of that money in Northland instead.

“I’m 70 this year and I’m fairly blind,” Bruce “Pic” Picot tells me. The founder of Pic’s Peanut Butter says he can’t read spreadsheets “or anything boring like that” – he just loves to make stuff. “There are more than enough people doing marketing and bloody sitting in front of computers and doing data analysis,” he says. “Making stuff is a fantastic thing to be doing.”

He’s worn a lot of different hats in his lifetime – leather sandal maker, travelling rock musician, restaurateur and sailing school owner to name just a few – but peanut butter has been his bread and butter since 2007. Compelled to create a superior spread to the mass-produced, overly sweet product he found stacked on supermarket shelves, Picot produced his first batch of peanut butter using a tonne of Australian peanuts in a concrete mixer turned roaster in his garage, and sold it at the local farmers market in sunny Nelson.

That product is now roasted, crushed and packed at Peanut Butter World, Pic’s Nelson headquarters, and shipped nationwide and around the world to Australia, China, southeast Asia, the UK and the US. Over the last decade, Pic’s and other boutique brands like Fix & Fogg, Nut Brothers and Forty Thieves have emerged in the nut butter space, satisfying tastebuds and continuing to stoke the perennial debate about which peanut butter texture is the best (crunchy all the way).

The reason I’m speaking with Picot now is because Pic’s operations have just gone solar. Nearly 500 solar panels have been installed on the factory’s roof, and the renewable power will cover at least a fifth of the factory’s annual energy demand – that’s enough power to roast 3.3 million peanuts on a sunny day, or 124,000 jars each month. The solar array will help stop some 31 tonnes of carbon from entering the atmosphere annually, Pic’s general manager Stuart Macintosh says, and will reduce the business’s total emissions by 5% each year. Macintosh says it’s “a step in the right direction”.

Pic’s energy initiative is just the latest measure the company has adopted to lessen the impact of climate change. Picot, a self-described “one-time hippie”, says people still don’t realise what a “catastrophe” climate change will be. “But once it starts to bite, people will – first of all – they’ll do the easiest thing first. They won’t give up driving around in their cars for a nice day at the beach very quickly, but they can choose which product they buy.”

And preferably that product will be Pic’s peanut butter. It’s high-protein, plant-based and made in New Zealand – although at the moment it’s made from peanuts grown in Australia, Brazil, Zambia and Nicaragua. One day, though, it could be made from peanuts grown in Aotearoa. Pic’s and a handful of other parties, including the Ministry of Primary Industries, Plant & Food Research and local Northland landowners, teamed up in October 2020 to test the possibility. The six-month trial in Te Tai Tokerau proved that Spanish hi-oleic peanuts – best suited to making peanut butter because their high oil content makes them ideal for crushing – could be grown commercially in the region.

Pic’s produced four jars of “NZ’s first ever homegrown peanut butter” from the first trial crop last year. One of the jars is now on display at Peanut Butter World, while the only one put up for sale fetched $3,150 in a charity auction on Trade Me. “It tastes amazing, but don’t open it,” was Picot’s advice to the buyer. “Leave it for your grandchildren.”

Another trial, which started last November and will run until 2024, hopes to establish a business case giving investors, landowners, growers and farmers the confidence they need to diversify into peanut growing, says Vaughan Cooper, the general manager of investment and infrastructure at Northland Inc, the agency responsible for the region’s economic development. “While it’s already clear that returns are possible from peanuts, we also need to factor in the commercial equipment required for harvesting and drying. We’ll be doing extensive economic modelling to determine whether the costs are worthwhile when producing peanuts at scale.”

Still, local crops can come up short. Just last week, Edmonds, whose sacks of flour are labelled with “proudly made in NZ”, said it would temporarily have to use Australian wheat after “adverse wheat growing conditions” in the South Island forced them to pivot. Pic’s hasn’t been immune to supply chain issues either – Picot says it was so short on peanuts at one stage during the pandemic that staff had to “clean everything twice, three times, and take their holidays”. Since it started in 2007, even “terrifying” price increases from its main Australian supplier have made the business realise it needs other suppliers from different countries, to avoid becoming too dependent on one source. Picot is reluctant to bet on Aotearoa supplying all of Pic’s needs though. “We’d still want to maintain those relationships with other producers in other parts of the world,” he says, “because the last thing we want is for us, a peanut butter manufacturer, to run out of peanuts.”

Nonetheless, the prospect of replacing – potentially as soon as 2025 – some of its overseas peanuts with “local stuff”, making peanut butter from them “and then exporting it if you want to, but actually feeding ourselves first, is pretty valuable”, says Picot. “We spend $10m a year on importing stuff, and the idea of spending that in Northland just blows me away.”